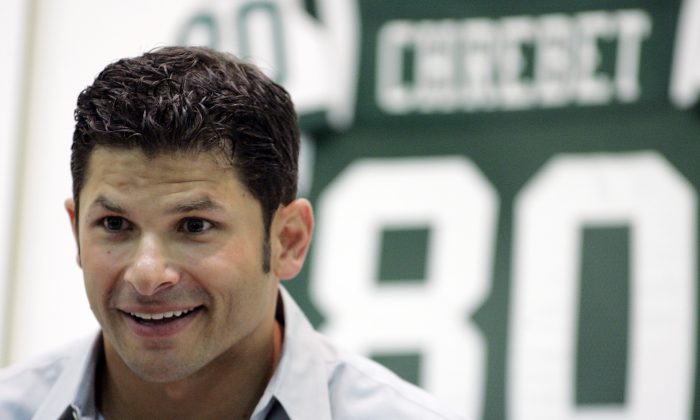 FILE - In this Friday, June 2, 2006, file photo, New York Jets wide receiver Wayne Chrebet announces his retirement after a 12-year career with the Jets during a news conference at the team's training facility in Hempstead, N.Y. Chrebet suffered at least six or seven concussions during his career. At halftime of the Jets' game against Miami, on Monday, Dec. 1, 2014, Chrebet will be inducted into the team's Ring of Honor along with late former owner Leon Hess. (AP Photo/Ed Betz, File)
News

On the Ball: Wayne Chrebet—A Jet Worth Honoring

There have been few good memories from this season for the 2–10 Jets—make that none. Fortunately, on Monday night they honored a man who gave us many during his decade-long career as a Jet—Wayne Chrebet.

A real-life underdog story, Chrebet was Jersey-born (Garfield) and starred at nearby Hofstra University, where in 1995 he graduated second in school history in both receptions and receiving yards. On draft day, though, the 5-foot,10-inch local star went unselected. Undeterred, he got a tryout with the Jets and made the most of it.

Chrebet went from the bottom of the depth chart to making the team to leading the team in receiving yards in each of his first two seasons with “Gang Green.” An extremely reliable possession receiver through his career, Chrebet played in 15 or more games in seven of his first eight seasons.

Though concussions eventually ended his career prematurely after 11 seasons in 2005 (at age 32), his total numbers are good enough to rank second in franchise history in catches (580) and third in receiving yards (7,365). No one has worn the number 80 jersey since his retirement—which at one brief point was the NFL’s highest-selling item (1998).

Of course, you can’t mention Chrebet’s best years with the Jets without mentioning Keyshawn Johnson. The contrast between the two great receivers really showed us all a lot about what Chrebet was all about.

Chrebet and Johnson were opposites in a number of ways. Wayne’s soft-spoken, hard-working ways were in direct contrast to the taller, talented, All-American loudmouth from USC the Jets would draft first overall after Chrebet’s first season—Johnson—and actually made fans appreciate him even more.

After Chrebet’s receiving numbers topped Johnson’s in 1996 for the 1–15 Jets, Keyshawn famously came out with his own self-ranting book titled “Just Give Me the Damn Ball!” where he took shots at various teammates—including Chrebet, who he referred to as the team mascot.

Chrebet, who was mentioned 17 times in the book, seemed unmoved by the whole thing, saying, “I’m flattered that he’s so obsessed with me.”

Despite tension between the two, the duo co-existed on the field nicely, to the tune of 158 total catches in 1998 as the Jets went 12–4 under Bill Parcells. A year later, though, the Jets traded Johnson, who wanted a newer, bigger contract, to Tampa Bay for a pair of first-round picks.

Chrebet, as likeable as he always was, was perhaps never more popular than after his first game against Keyshawn and his new team—the Buccaneers—in late September of 2000, just months after the major trade.

Right on cue leading up to the game, Johnson, now officially the villain, had another zinger when talking about Chrebet, saying, “You’re trying to compare a flashlight to a star. Flashlights only last so long, a star is in the sky forever.”

To be fair, Keyshawn made three Pro Bowls to Chrebet’s zero, but you never would have known it that night. While Chrebet “the flashlight” caught the game-winning TD catch with a minute remaining in a 21–17 come-from-behind Jets’ win, Keyshawn finished with just one catch for one yard—and zero impact—in the loss.

Despite opportunities afterward, Chrebet wasn’t one to boast with his mouth. He let his play do the talking.