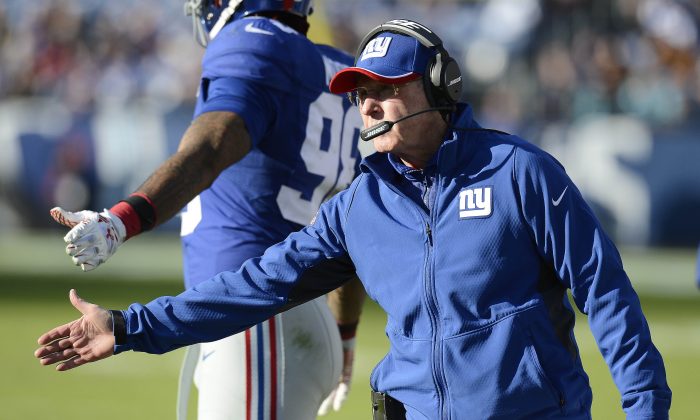 New York Giants head coach Tom Coughlin reaches to congratulate Andre Williams, not shown, after Williams scored a touchdown on a 50-yard run against the Tennessee Titans in the second half of an NFL football game Sunday, Dec. 7, 2014, in Nashville, Tenn. (AP Photo/Mark Zaleski)
News

On the Ball: The Case of Tom Coughlin: Staying or Going?

I remember when the Giants hired Tom Coughlin. It was early January 2004 and a friend of mine (a die-hard Giants fan) was so excited about the hire, he boldly predicted a division title the very next season—it didn’t happen, not that Coughlin was necessarily to blame for Eli Manning’s rookie year performance.

After swapping out Jim Fassel for Coughlin, the Giants also decided to start over at quarterback that same offseason, when they traded up for Manning—at which point my friend correctly decided all bets were officially off.

He was eventually right about Coughlin though who subsequently led the Giants to four straight playoff appearances—including a win in Super Bowl XLII—in years 2 through 5 of his now 11-year run in East Rutherford.

Now nearly three years removed from his last playoff appearance—a Super Bowl XLVI win over New England—Coughlin and the Giants may be at a crossroads. Will he stay or go?

The Case for Him Going

Here it is in a nutshell: two straight losing seasons and only one playoff appearance in the last six seasons for the 68-year old disciplinarian coach, who is probably seen by some to be out of touch with some of today’s younger players.

Of course that one playoff appearance netted him his second Super Bowl win, but that doesn’t give you free rein forever—just ask Mike Shanahan.

The Broncos had Shanahan stay and rebuild them though and he got them back to the playoffs three straight years (2003–2005) before they fell back again. Denver missed the playoffs with lukewarm—but not awful—records of 9–7, 7–9, and 8–8 the next three seasons before Shanahan was out.

So Shanahan made the playoffs in three of his last six seasons and his worst year during that span was 7–9. Coughlin’s made the postseason once in the last six years and he’ll need to win his last two here to tie last season’s 7–9 mark. And both won a pair of Super Bowls.

The Case for Him Staying

It’s simple: Coughlin is 1 of 13 coaches to win more than one Super Bowl, he’s been Eli Manning’s coach since the beginning, and he’s helped develop a new star in wideout Odell Beckham Jr.

Next year, with a healthy Victor Cruz and an improved offensive line, the Giants should have a great offense—especially through the air.

There’s precedence for him staying, too.

Don Shula, who won back-to-back Super Bowls with the Dolphins in the early ’70s, missed the playoffs four straight seasons (1986–1989) despite having Dan Marino as his quarterback. He rebounded to lead Miami to four more postseason appearances over his next six seasons before retiring.

The verdict: The Giants split their final two games and he stays—Coughlin can still coach and the Giants know that he and Eli are tough to beat come postseason time.