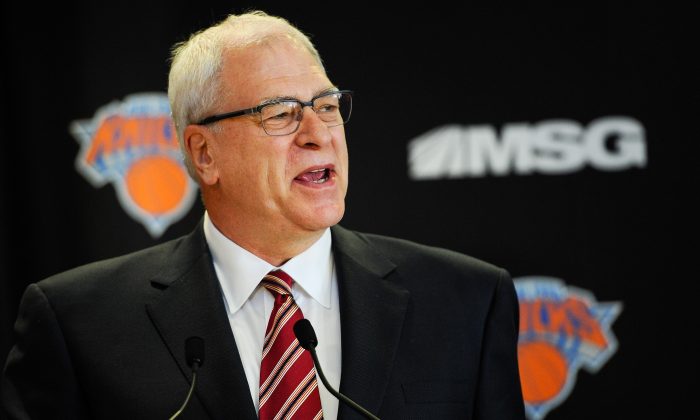 Phil Jackson is back to the drawing board in his pursuit of a new coach. (Maddie Meyer/Getty Images)
News

On the Ball: Wait, Phil Jackson Doesn’t Get His Guy??

I’ve seen the insane (Mike D’Antoni being hired over Phil Jackson), the crazy (anybody hiring Charlie Weis), the improbable (KU not choking in a year I have them winning the bracket), the ridiculous (Mike D’Antoni actually resigning in hopes of a new job), the makes-no-sense (the Jets passing over Johnny Manziel despite being “blessed” with lowest-rated passer in the league) and the unthinkable (Kobe Bryant NOT ever winning the NBA’s Sportsmanship Award).

But what I didn’t see coming was Knicks President Phil Jackson losing to the Golden State Warriors in the Steve Kerr coaching sweepstakes.

Jackson has been very successful in the NBA—to say the least. He won 11 titles in his 20 seasons of coaching. Including the one he won as a player he’s had a hand in 12 of the 67 total NBA championships altogether.

Sure, he’s had plenty of talent to work with along the way (Kobe Bryant, Shaquille O’Neal, Scottie Pippen, and Michael Jordan to name a few) but things can go wrong for even the best. Title-winning teams can get complacent, yet Phil had three separate back-to-back-to-back title runs. Players can get sick (think of Jordan’s “flu game”), or injured (Andrew Bynum), or hit by the always popular rape accusation (okay, I can only actually remember that happening to Kobe) while in pursuit of Phil’s annual goal—the NBA title.

Yet shockingly, he missed out on his top coaching target with the Knicks—and Kerr looks like a good prospect at that.

Though Kerr has no prior coaching experience he’s a former GM and won five titles as a player under both Jackson and Gregg Popovich—who’ve won 15 titles between them.

With him being an analyst for TNT, it’s easy to see why he stuck around in the league, despite never having great athleticism—like Jackson. He’s focused, even-tempered, well-spoken, patient, and even remains calm in a disagreement, yet still stands up for himself. Plus, he didn’t screw up the Lakers for the last two years.

In any case, with him out of the picture who does Jackson turn to now?

I see the following as likely candidates:

1. Brian Shaw—Jackson’s former assistant with the Lakers, Shaw just completed his first season with Denver and led the Nuggets to a 36–46 record and no postseason—nothing flashy, but Jackson could almost coach vicariously through him in New York.

2. Mark Jackson—I know, he was just fired by the Warriors, but Jackson wasn’t necessarily let go for his performance on the court. He was drafted by and played for the Knicks after going to school locally at St. John’s. In addition, as a point guard for the Pacers in the ’90s, Jackson was right there motivating Reggie Miller as he broke the hearts of Knicks’ fans in the playoffs. He was born to coach.

3. Phil Jackson—Yes, Phil has said he won’t coach, but with his top target turning him down, he may have to “settle” for a guy with only 11 titles. Plus, imagine what a selling point that would be to any potential free agent this summer.

And hey, if he can’t get any of those, I’m sure D’Antoni’s available.