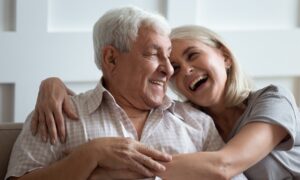 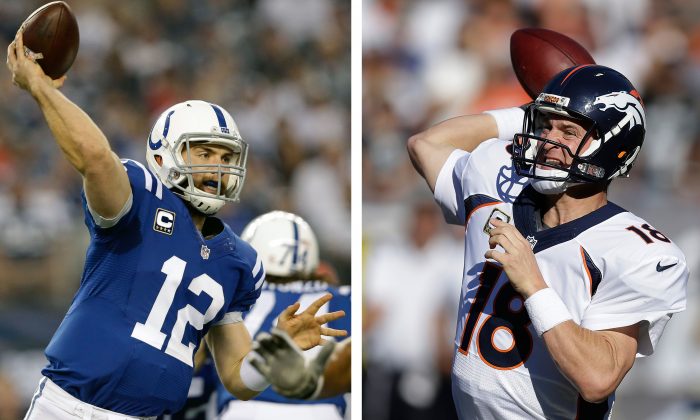 FILE - At left, in a Dec. 21, 2014, file photo, Indianapolis Colts quarterback Andrew Luck (12) passes under pressure from the Dallas Cowboys during the first half of an NFL football game in Arlington, Texas. At right, in a Nov. 9, 2014, file photo, Denver Broncos quarterback Peyton Manning (18) passes against the Oakland Raiders during the second quarter of an NFL football game in Oakland, Calif. There will be no talk about “game managers” for the rest of these NFL playoffs, or quarterbacks who are still in the hunt solely because they’re surrounded by a great defense or running game. Quite simply, the eight signal callers still chasing the Super Bowl have pedigree. (AP Photo/File)
News

On the Ball: NFL Playoff Picks

In navigating the NFL Playoffs, I’ve found the best thing you can do is to disregard regular season numbers—anyone who ever followed the annually disappointing Chiefs under Marty Schottenheimer knows this. Naturally, the home/road split is still in play, but some players/coaches are just better on the big stage.

Ten years ago next month marks Tom Brady and the Patriots’ last Super Bowl win—shocking, isn’t it? If you had told me then that Brady would put up even better numbers in the regular season and the Belichick-led Patriots would average more than 12 wins a season over the next decade, I would have put the over/under at three Super Bowl rings.

How they’ve been stopped can be attributed to a number of things including an impossible catch by David Tyree, a questionable TD call in Denver, and a clutch quarterback performance by Joe Flacco, who threw three second-half TDs in Baltimore’s 28–13 win, two years ago.

Flacco’s presence makes this Saturday’s contest in Foxboro, Mass., a difficult call because he’s turned into the NFL’s version of Claude Lemieux—a good regular season player who saves his best for postseason. He has a quarterback rating of 106.0 during his last four postseasons, while posting an 88.2 during those same regular seasons.

Ultimately, the Ravens are still on the road, though, and New England certainly remembers the loss two years ago. Even if the Patriots are without Jonas Gray (questionable), they have LeGarrette Blount behind him and a still-healthy Rob Gronkowsi to throw to. The pick: Patriots 27, Ravens 21

Here’s one of the most telling stats regarding Seattle’s mid-season trade of Percy Harvin: They were 6–4 with him, 6–0 without him—with all six wins by double-digits. Whatever Super Bowl hangover Seattle was dealing with before his surprising trade is over, and the Seahawks are entering the postseason on a nice streak—much like the Panthers.

Carolina has won five straight games, though all five were either against teams with losing records or teams who were forced to start Ryan Lindley at quarterback.

The Seahawks, with their No. 1 defense, should have no problem in this one. The pick: Seahawks 28, Panthers 10

But even if he’s somewhat limited, Dallas isn’t a great pick here.

The Cowboys needed some fortuitous calls to win last week against the Lions, and that marked just the second career playoff victory for the 34-year-old Tony Romo—two less than Mark Sanchez. But Romo actually played well, throwing for 293 yards and two touchdowns. Dallas, which got just 75 yards rushing from DeMarco Murray—his third-lowest output of the season—was out-gained in yards 397–315. They’ll need a much better performance to win Saturday. The pick: Packers 31, Cowboys 27

Another big game with another pivotal injury here as Peyton Manning, who skipped two practices last week to rest his ailing thigh, doesn’t seem to be 100 percent, though he’s practicing now. I think this injury is more likely to help Manning, who may need a distraction (or challenge, if you will) to keep him from putting too much pressure on himself.

Let’s be honest here, Manning and the Broncos lost to the Seahawks in last year’s Super Bowl even before kickoff—they were overly nervous from the get-go. It’s been an on/off issue through his career. Besides, even though his release from the Colts seemed friendly on the surface, he knows the Colts chose Andrew Luck over him.

The Colts, and Luck, are certainly a formidable opponent—Luck has taken a good receiving corps with an otherwise average roster and led them to a division title. He’ll put up some good numbers, but Denver should prevail. The pick: Broncos 31, Colts 20