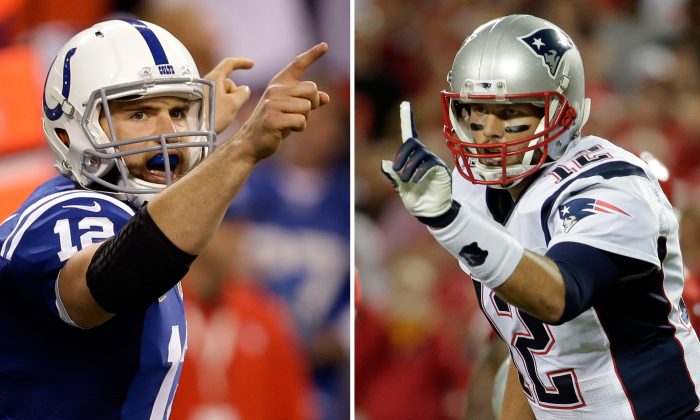 FILE - At left, in a Nov. 30, 2014, file photo, Indianapolis Colts quarterback Andrew Luck celebrates a 79-yard touchdown pass to wide receiver Donte Moncrief against the Washington Redskins during the second half of an NFL football game in Indianapolis. At right, in a Sept. 29, 2014, file photo, New England Patriots quarterback Tom Brady points on the line of scrimmage during the first quarter of an NFL football game against the Kansas City Chiefs in Kansas City, Mo. No Tom Brady-Peyton Manning rematch this time. Instead, it will be Brady and Andrew Luck meeting again in a matchup of star quarterbacks when the New England Patriots host the Indianapolis Colts in the AFC championship game Sunday. (AP Photo/Charlie Riedel, File)
News

Even though Peyton Manning and the Broncos are already out, there’s plenty of star power left at the quarterback position in these playoffs. Tom Brady, Russell Wilson, and Aaron Rodgers have a combined five Super Bowl wins and three MVP awards and we haven’t even mentioned Andrew Luck, who’s probably the most talented guy out there. Here are this weekend’s picks:

If there ever was a time to find out just how great the former MVP Rodgers is, it’ll be this Sunday in Seattle. Can he pull out his inner-Michael Jordan and play (and succeed) despite the ailment?

Sure, football is a team game and he’ll need help from his defense and running game to pull off an upset, but quarterbacks are the highest-paid for a reason—they have more impact on winning or losing than anyone else.

Green Bay will need every bit of that impact against the Seahawks’ Legion of Boom secondary.

Rodgers ignored the pain against the Cowboys last Sunday in completing 24 of 35 passes for 316 yards and 3 TDs, including completions on his final 10 passes—pretty impressive. Still, it was at home against Dallas, and it would have taken even more from him had Dez Bryant’s late catch not been reversed.

Meanwhile, Seattle showed off its athletic talent in the win over Carolina. Kam Chancellor caused chaos in the passing game and special teams play and he’s not even their best secondary player—that would be Richard Sherman. A hobbled Rodgers will have to somehow throw past Sherman—or avoid his side of the field completely—to get back the Pack back to the Super Bowl, but that doesn’t seem likely. The pick: Seahawks 28, Packers 17.

Anyone who watched the classic that was the Patriots/Ravens divisional playoff game thinks they have an idea of what New England will likely be doing Sunday—passing. Brady attempted 51 passes (plus he was sacked twice) compared to just seven total rushes from running backs Shane Vereen, LeGarrette Blount, and Brandon Bolden in the come-from-behind win.

There’s always a chance that Bill Belichick will take running back Jonas Gray out of the doghouse and play him this week in a run-oriented attack, though—only Belichick’s beautiful mind knows. Gray has played sparingly since he burned these same Colts for 201 yards rushing on Nov. 16 in the 42–20 win in Indianapolis. Five days later he was then banished to the bench after being late for practice and has played sparingly since.

In that November game though, the Colts were without run-stoppers Arthur Jones and Laron Landry so the Pats seem likely go with a little more of Brady in the passing game, plus a little trickery.

Of course, even if the Colts know what’s coming, it doesn’t mean they’ll be able to stop it—especially if the Patriots continue the four offensive lineman passing approach that confused/angered John Harbaugh and the Ravens.

The Colts have Luck and a great passing game, but they likely won’t be the beneficiaries of playing against a team that’s wilting under the postseason spotlight, like they did last week against Denver. The pick: Patriots 31, Colts 27.