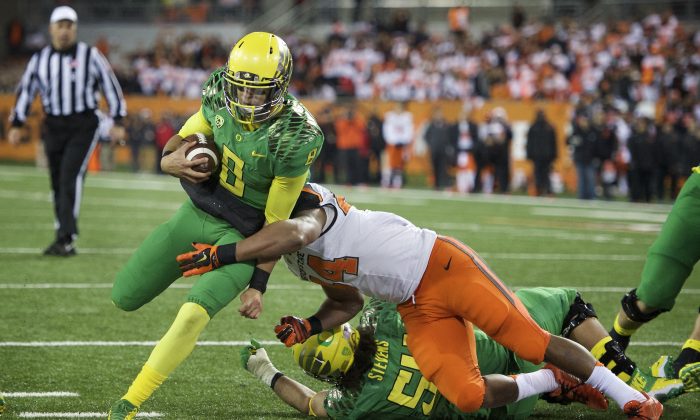 On the Ball: My Final Heisman Rankings

Although it took a couple years for me to get fed up with the BCS (actually, it was in 2003 when USC was left out), I’m already tired of the four-team playoff setup, and we haven’t even played the games yet. We all knew four wild card selections are tougher than the BCS’s two, and with five power conferences, someone is going to be left out.

Fortunately, the Heisman Trophy watch is much less controversial—especially this year. Marcus Mariota has led ever since reigning Heisman winner Jameis Winston started throwing picks in Week 1 against Oklahoma State, and hasn’t looked back since.

Kessler has flown under the radar this season with the Trojans, but as his numbers suggest, he’s been huge for them. The junior has six games of four or more TD passes, including seven against Colorado in mid-October. Meanwhile, his four total picks are tied for the second-fewest of any quarterback in the top 30 in QB rating. His only problem is the 8–4 team record, although three of those losses are by six or fewer points.

The freshman Barrett came in after the preseason injury to incumbent Braxton Miller and put up incredible numbers all season. The dual threat has four 300-yard passing games and a pair of 100-yard rushing games while leading the Buckeyes to the Big Ten title game. His drawback is that Ohio State played as well, if not better, with Barrett sidelined in drubbing Wisconsin 59–0 in the conference title game.

Cooper has been a constant in the 12–1 Tide’s offense all season. Eleven times he had more than 80 yards receiving, and three times he went over 200—including the 13-catch, 224-yard performance against Auburn that kept them in the playoff chase. Although Cooper narrowly leads the country in both catches and yards, he would have needed to distance himself some more to beat out the top two candidates.

Gordon not only broke the NCAA single-game mark with 408 rushing yards against Nebraska on Nov. 15 (though it was broken again the very next week), his single-season mark of 2,336 is the highest total since 2007 when Kevin Smith of Central Florida went for 2,567. Despite the gaudy stats, Gordon is hindered by managing just 76 yards in the biggest game of the season—the Big Ten title game, where they were blown out by Ohio State. Though the Buckeyes gave him little room to operate, he could have caught Mariota with a memorable performance.

Mariota’s incredible consistency on a top-level team has kept him above the rest for nearly the entire season. He’s thrown for 300 yards seven times so far and has amassed at least 200 yards and 2 scores in all 13 games. He’s been smart with his throws, as well. His two interceptions are the fewest among the top 30 quarterbacks in QB rating. The only question remaining for him is how high he’s taken in the draft next spring—should he skip his final year.