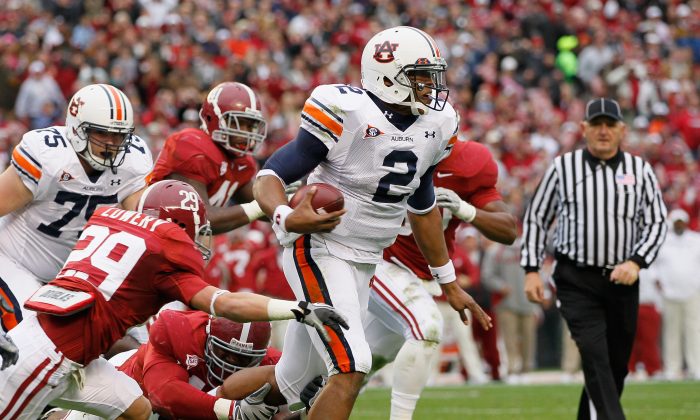 On the Ball: Most Dominating Heisman Seasons

Heisman front-runners Marcus Mariota of Oregon, Kenny Hill of Texas A&M, and Alabama receiver Amari Cooper have each had a fast start to the young season. Whether they continue their torrid starts remains to be seen, though. Here are the five best Heisman performances over the last 30 years.

Note that the NCAA didn’t count bowl game statistics as part of regular season records until 2002, but curiously they didn’t go back and make them retroactive. For comparison purposes, we’re including those numbers here.

5. Texas RB Ricky Williams, 1998: 2,327 rushing yards, 30 TDs—Ricky’s senior season saw him break the NCAA’s career rushing mark (among 16 NCAA records he broke) while becoming just the seventh running back ever to crack the single-season, 2,000-yard barrier. His mid-season back-to-back 300-yard games against Rice and Iowa State were an NCAA-first and put him at the top of Heisman lists everywhere. In the end, his incredible season netted him the third-most first-place votes (714) in the history of the Heisman up to that point.

4. Michigan CB Charles Woodson, 1997: 8 Ints, 44 tackles, 1 rushing TD, 2 receiving TDs, 1 punt return TD—Woodson remains the only primarily defensive player to win the Heisman Trophy in the 79 years of its existence. The multitalented defensive back led Michigan to a share of the national championship while being a shut-down cornerback, explosive punt returner, and offensive receiver for the 12–0 Wolverines.

3. Florida QB Tim Tebow, 2007: 3,286 passing yards, 32 TDs, 895 rushing yards, and rushing 23 TDs—After being a backup on Florida’s 2006 title-winning team, Tebow took the reigns as a sophomore and became the first underclassman to win the award—and for good reason.

The dual-threat quarterback became the first player ever to both pass and run for 20 or more scores in a season. Among his best performances for the 9–4 Gators was his effort against South Carolina where he accounted for seven touchdowns—five rushing and two passing—while accumulating 120 yards on the ground and 304 through the air in a 51–31 win.

2. Auburn QB Cam Newton, 2010: 2,854 passing yards, 30 TDs, 1,473 rushing yards, and 20 rushing TDs—Newton came out of Blinn Community College in Texas to be the ultimate one-hit wonder for the Tigers, who won the title that season.

The JuCo transfer became the first player in the history of the storied SEC to throw for more than 2,000 yards and run for more than 1,000 yards in a season. Included in his totals was a three-game stretch where he averaged 201 yards on the ground against conference foes Kentucky, Arkansas, and LSU.

His best performance, though, was engineering Auburn’s thrilling comeback from 24 points down in the regular season finale against Alabama to keep the team’s title hopes alive.

1. Oklahoma State RB Barry Sanders, 1988: 2,850 rushing yards, 44 TDs—As great as some of the other players’ seasons were on this list, Sanders’s Heisman campaign is head and shoulders above the rest.

After being Thurman Thomas’s backup the year before, Sanders seemingly came out of nowhere to break the NCAA’s single-season rushing and touchdown record (which both still stand), among the 34 records he broke that year.

Sanders’s incredible total includes a record four 300-yard games and a season-average of 237 yards per contest on the ground. He finished especially strong, going more than 200 yards in each of the last six games of the season. In addition, the shifty Sanders had at least two touchdowns in all 12 of Oklahoma State’s games and even returned both a kickoff and a punt for a score during that memorable season.