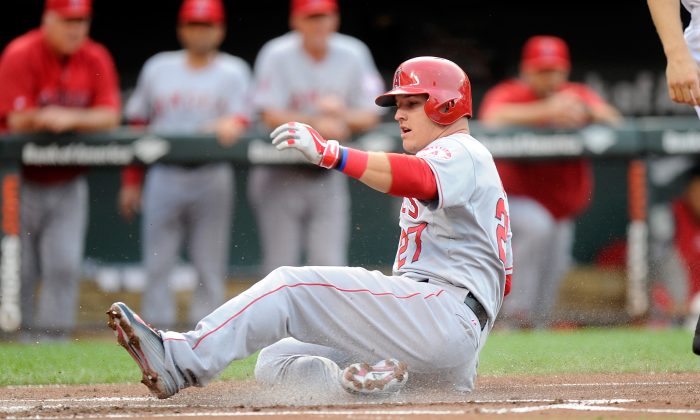 Mike Trout of the Los Angeles Angels on July 29. Trout is on pace for his first MVP award, after finishing runner-up to Miguel Cabrera each of the past two years. (Greg Fiume/Getty Images)
News

On the Ball: MLB Award Leaders

With the baseball season now more than three-fourths complete, it’s time to take an early look at the probable award winners in each league. Onto the projected winners, with statistics through Wednesday’s games:

After finishing runner-up to Miguel Cabrera each of the last two years, Trout, who’s possibly the best two-way player in the game, is finally in the driver’s seat for his first MVP. Helping out the centerfielder is the fact that not only has Cabrera’s hitting come back to earth this year, but the first-place Angels are headed back to the playoffs for the first time since 2009—always a sticking point for the voters. Runner-up: Josh Donaldson, Oakland A’s (.251 average, 25 home runs, 84 RBIs)

“King Felix,” who won the 2010 Cy Young, currently leads the league in ERA and is just one win and 15 strikeouts away from holding the pitcher’s version of the Triple Crown. Even more than the aforementioned traditional measurements, Hernandez leads the league in fewest walks/hits per inning at 0.874. Runner-up: Chris Sale, Chicago White Sox (10–3 record, 2.12 ERA, 158 strikeouts)

Despite missing 14 games in May and June with ankle tendonitis, Abreu is still leading the majors in home runs. However he’s slowed down to the tune of just one homer in August, but for purposes of this award, the 27-year-old has a sizeable lead over the Yankees’ Masahiro Tanaka—who’s likely out for the rest of the season. Runner-up: Masahiro Tanaka, New York Yankees (12–4 record, 2.51 ERA, 135 strikeouts)

This may be a bit of a reach here, only because Stanton’s Marlins aren’t on pace for one of the five playoff spots in the NL, but the 24-year-old is having quite a season. Not only is he tops in the NL in long balls, he also leads the senior circuit in walks (80) and is second in on-base percentage (.400) and first in slugging (.561). Runner-up: Andrew McCutchen (.305 average, 17 home runs, 67 RBIs)

Kershaw’s already won a pair of Cy Youngs, and with a third he would enter very select company—only eight pitchers have won as many as three. After missing all of April with a strained muscle in his back, he’s still only one win and 24 strikeouts off the NL leaders while pacing the league in ERA. Runner-up: Johnny Cueto, Cincinnati Reds (15–7 record, 2.24 ERA, 191 strikeouts)

Hamilton is the best choice in a weak class of NL rookies. His speed on the basepaths made him a name in the minors in 2012 when he stole a whopping 155 bases. Additionally, the centerfielder leads the NL in assists with 7. Runner-up: Chris Owings, Arizona Diamondbacks (.277 average, 6 home runs, 21 RBIs)