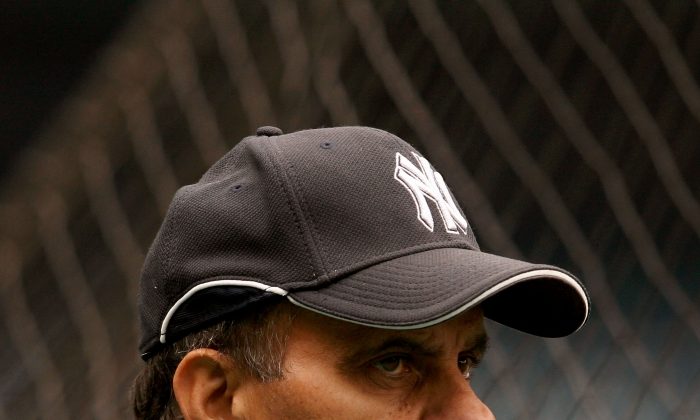 Joe Torre took the Yankees to the postseason in all 12 of his years in the Bronx. (Nick Laham/Getty Images)
News

When I saw the news Thursday that the Yankees were going to retire Joe Torre’s number, my first reaction was surprisingly of genuine happiness—this from someone who was never a fan of the Yankees during his time there.

Would the Yankees remember him for the four titles in his first five seasons or letting his contract run out after failing to win the pennant in any of his final four seasons? Apparently it’s the former as well it should be.

His hiring, nearly 20 years ago, was a bit of a surprise given the standards in the Bronx versus what little success Torre had enjoyed before coming aboard.

Before joining the Yankees in 1996, Torre had piloted the Braves, Cardinals, and Mets for a grand total of 15 seasons and had just one division title to show for it—far below George Steinbrenner’s expectations.

Of course in baseball, more than any other sport, the manager’s worth is the most difficult to judge, simply because it’s less of a team sport than basketball, hockey, or football. You can’t double-team a pitcher, you can’t hide a bad defender in the outfield, and you can’t call a timeout to regroup your team.

Consequently, managers can be recycled until it’s finally obvious that they’re equipped for the job (Torre) or not equipped (Bobby Valentine). Naturally these aren’t hard and fast rules—even the Red Sox can foul this up.

Anyway, the Yankees thought Torre would be a good fit despite his uneven record, and they were right. Besides the aforementioned four titles in five seasons, he led the Yanks to 10 division titles and two wild cards in his 12 years in the Bronx.

He was the perfect fit—and he was done in by his own success.

As much as I disliked the Yankees during his run there (nothing personal, but being a fan of the dismal Royals we quickly grew tired of the annual view from the basement and the courtesy yearly sweep) it was really a backhanded compliment—they were just too good.

Of course, I wasn’t sold on Torre from the outset.

After all, the Yankees were getting good at a time when payroll disparities were zooming out of control and they were the No. 1 culprit.

Who wasn’t going to win a World Series with that group?

But after winning titles in 1998, ’99, and 2000, to go along with his one in ’96, there was no disputing it anymore—Torre knew how to manage, and his management style was perfect for the Yankees plan of building around the core four.

Then they went away from the plan.

After giving the rest of us a break and actually losing the 2001 World Series, the team went out and signed Jason Giambi to replace the popular Tino Martinez at first. This was not the usual complimentary player coming in. This was a star player who I thought disrupted the tight clubhouse the team had assembled.

Soon the Yankees would bring in players in the Giambi mold like Gary Sheffield, Kevin Brown, Ruben Sierra, and others and the postseason results continued to lag.

Torre’s final four seasons saw three division titles and no pennants—a far cry from his earlier success—and he was summarily disposed of. As great as his successor Joe Girardi has been, he still only has one World Series title in six seasons—three more and maybe he too will be dismissed.