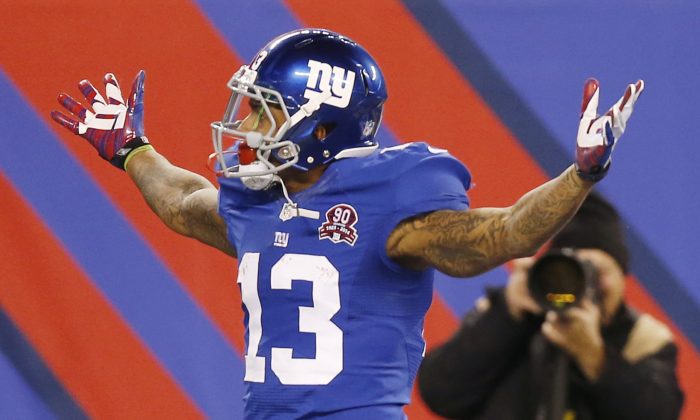 On the Ball: It’s Official—Beckham’s Going to be a Star

I’m usually not in favor of NFL teams drafting receivers in the first round. Receivers are the biggest crapshoot position in the draft—you never know what you’re going to get. And sometimes you can get better ones later in the draft. They’re very difficult to judge.

It’s the bigger linemen—on both sides of the ball—that are more difficult to find. Hence they should be given priority when drafting.

So when the Giants—who could use a good lineman on both offense and defense—took Odell Beckham Jr. with the 12th overall pick last May, I thought it was a mistake. (It should be noted that I also thought Mark Sanchez was a great pick and would be a star with the Jets. Woops.)

Sunday night, Odell Beckham more than justified their pick and shot a hole through my receiver theory at the same time. (The lesson, as always: I’d be a terrible GM.)

The rookie receiver hauled in a career-best 10 catches for 146 yards and now has 601 yards through just seven games. More than just numbers, Beckham has three characteristics that usually spell greatness, if not All-Pro material.

1. He stretches the field.

Beckham isn’t the fastest player on the field, but he runs good routes and is able to go long—just look at his circus catch Sunday night. His acrobatic, one-handed, 43-yard TD-grab (with defenders all over him) early in the second quarter was not just a great catch, it was a great route. He beat his man, who was flagged for pass interference, to the end zone and hauled in the ball—one-handed—while falling to the turf and staying in bounds.

Not only does that kind of route-running skill make it easier for Beckham to get to the end zone, it also helps the rest of the offense.

Stretching the field gives others like tight end Larry Donnell (another undrafted gem) and the aforementioned Cruz more room to operate, which makes finding open receivers much easier for Eli Manning.

2. He has sure hands and thus makes acrobatic catches.

Making a great catch isn’t always the sign of dominance—Lynn Swann made several great grabs in Super Bowl X, but was never a regular season star—but it certainly doesn’t hurt to have a knack for the dramatic.

At the very least, it means you have sure hands—a must-have for every great receiver.

The now second-best catch I’ve ever witnessed at MetLife Stadium was done by none other than Randy Moss—a guy who was known to stretch the field—when he was with the Patriots. He beat Darrelle Revis—then in his prime—to make a one-handed grab in the end zone back in 2010. It was one of the few times I saw Revis look helpless.

Beckham’s jaw-dropping grab Sunday night wasn’t in a Super Bowl, and it didn’t come against someone of Revis’s caliber, but it was still up there as one of the greats. Only time will tell for sure how it’s remembered.

Beckham’s first Sunday night performance was, of course, a success in which he set a career-best in catches, while going over 100 yards for the third time in four games and scoring a pair of touchdowns.

Does it guarantee greatness? No, but it doesn’t hurt.

Remember when then-rookie Randy Moss ripped Green Bay for 190 yards on five catches in his first Monday Night Football performance in 1998? Or his three catches for 163 yards and three TDs against Dallas on Thanksgiving later that fall?

Some guys just have the knack for coming up big on the big stage.