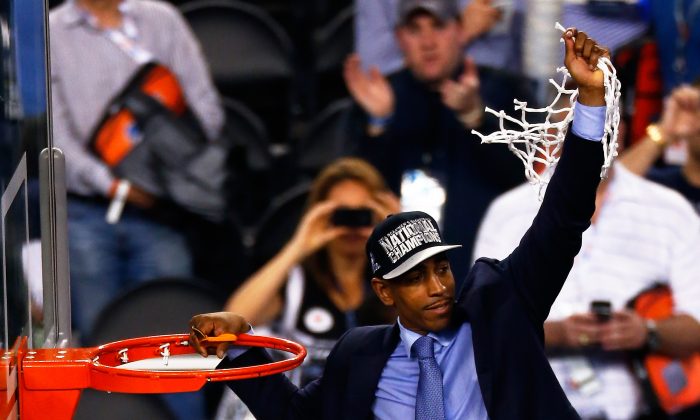 On the Ball: I Was Wrong About Ollie

I admit it, I wasn’t that high on Kevin Ollie when the Huskies made him head coach in October 2012—his hiring seemed to come at the behest of retiring coach Jim Calhoun, Ollie’s college coach. After all, what coach wouldn’t endorse his former player?

Actually, I had no problem with Ollie personally, but I knew little about him except that he was a former Huskie who hung around the NBA for a surprising number of seasons (13) despite limited skills. As impressive is that is, it doesn’t always equate to a good coach.

My reasoning was this: UConn was just a year and a half removed from winning its third title in a 13-year span—that’s more than Duke, North Carolina, Kansas, UCLA, or Kentucky had during that same timeframe. Shouldn’t that be an attractive landing spot for … just about anyone?

Fortunately they made the right move.

After a decent 20–10 first season, all Ollie did was go 32–8 to win the national title this past year and of course make me look silly for picking against his Huskies at every step of the way—especially my Final Four and national title game preview, where I barely mentioned the word UConn. (Many thanks to my brother for “graciously” pointing this out to me. Of course, I’m the same person who thought Marcus Camby was a better pro prospect than Tim Duncan and, sadly, Mark Sanchez over Matthew Stafford: please try to forget that, the next time I spend a whole column gushing about Johnny Manziel.)

The funny thing is that I, of anyone, should have known that prior head-coaching experience means very little. Eventually all the greats have to start somewhere, right?

In 1988 Larry Brown broke my heart when he left KU for the San Antonio Spurs, right after leading the Jayhawks to an improbable national title. As I would later realize, it was nothing personal for Brown—he’s on his seventh team since.

Despite a national championship trophy to lure a big-time coach with, KU had to “settle” for then-North Carolina assistant Roy Williams, who had zero head-coaching experience at the time and was a total unknown.

I still remember when KU announced Roy’s hiring my stunned mom (fellow KU fan) exclaiming something to the effect, “His name is Roy?? They replaced Larry Brown with someone named Roy??” Needless to say, we were expecting a bigger hire.

Needless to say, Roy turned out to be a good one.

Much like Ollie at UConn, Roy’s second season made us forget all about his predecessor. The Jayhawks, unranked at the beginning of the season, vaulted to the top of the rankings by January and finished 30–5 that year, though they were upset in the second round of the NCAA tourney—sadly, it would be a sign of things to come.

With a title in his second season, Ollie is already off to a better start than the Hall-of-Famer Williams. Who knows, if he keeps this up he might get a mention in next year’s Final Four preview—I’m sure my brother will “remind” me if he doesn’t.