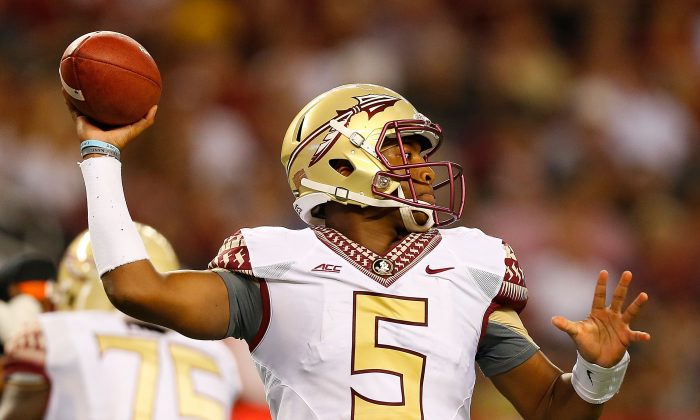 Jameis Winston of the Florida State Seminoles threw for 370 yards, but was picked twice in the win over Oklahoma State. (Tom Pennington/Getty Images)
News

With college football’s first weekend in the books, it’s clear a number of teams have some work to do. Ohio State struggled to put away Navy—though that was less of a surprise after the loss of injured quarterback Braxton Miller. Meanwhile South Carolina, which lost top overall pick Jadeveon Clowney to the NFL, gave up 680 yards to Texas A&M in a home loss and will need to pick up the pace if they’re going to compete in the SEC. But those were the bad—here’s the good, with the top 10 teams in college football.

10. LSU (1–0): LSU has almost always had a good defense under Les Miles. Saturday’s 28–24 fourth-quarter comeback win over Wisconsin was another showing of that defense as the Tigers limited the Badgers to just 65 yards of offense in the final quarter, while outscoring them 14–0. This week: versus Sam Houston.

9. Notre Dame (1–0): The Fighting Irish, with quarterback Everett Golson back under center after spending a year away from football due to academic issues, looked like the contender they were in 2012 in a 48–17 win over Rice. Golson threw for two scores and ran for three more. This week: versus Michigan.

8. Georgia (1–0): The Bulldogs, led by one of the more under-appreciated coaches in America in Mark Richt (127–45 at Georgia), displayed quite the prolific rushing offense Saturday. Georgia racked up 328 yards on the ground in the 45–21 runaway win over Clemson. Heisman candidate Todd Gurley accounted for 198 of those yards on only 15 carries. This week: Bye week.

7. Stanford (1–0): The Cardinals had no trouble with UC Davis (nor should they have) in jumping out to a 38–0 halftime lead and never looking back. While the offense scored just once after halftime, the defense never looked back allowing just 115 total yards and 6 first downs for the game. This week: versus USC.

6. Texas A&M (1–0): If there were any questions about how good a coach Kevin Sumlin is without Johnny Manziel, his first major test without the Heisman winner, Thursday’s 52–28 win at South Carolina, should put those to rest. The 511 passing yards by sophomore quarterback Kenny Hill were more than Manziel ever put up and to do it against a quality opponent like South Carolina was no small feat. This week: versus Lamar.

5. Auburn (1–0): In Saturday’s 45–21 win over Arkansas, the Tigers look like they have a nice two-headed monster at quarterback. With Jeremy Johnson throwing the ball (12/16 passing for 243 yards, 2 TDs) and Nick Marshall the dual-threat (50 yards passing, 19 rushing yards) under center, this looks like another great offense assembled by head coach Gus Malzahn. This week: versus San Jose State.

4. Oklahoma (1–0): The Sooners put up a solid performance against Louisiana Tech (no surprise, given the talent differential) taking a 41–3 lead into the fourth quarter before allowing some late-game scores. We probably won’t really know how good OU is though until their Week 3 game against Tennessee. This week: at Tulsa.

3. Alabama (1–0): Believe it or not, the Crimson Tide’s less-than-impressive 33–23 win over West Virginia Saturday snapped a two-game losing streak for Nick Saban’s program, which has won three of the last five national titles. In the win, the Tide’s offense rolled up 538 yards, though the defense allowed 393 yards, while WVU also ran a kickoff 100 yards for a TD. This week: versus Florida Atlantic.

2. Florida State (1–0): The Seminoles, though they topped Oklahoma State 37–31 Saturday, played like a team burdened with high expectations, coming off last year’s national championship. Reigning Heisman winner Jameis Winston threw for 370 yards and a touchdown, but Florida State didn’t blow out the Cowboys as most would imagine. Still, they have the talent to be great. This week: versus Citadel.

1. Oregon (1–0): Heisman candidate Marcus Mariota was pretty special Saturday, albeit in a 62–13 win against lowly North Dakota. The junior quarterback was 14/20 passing for 267 yards and 3 TDs, and then rushed for another 43, plus another TD on just 6 carries—all in just one half of play. This week: versus Michigan State.