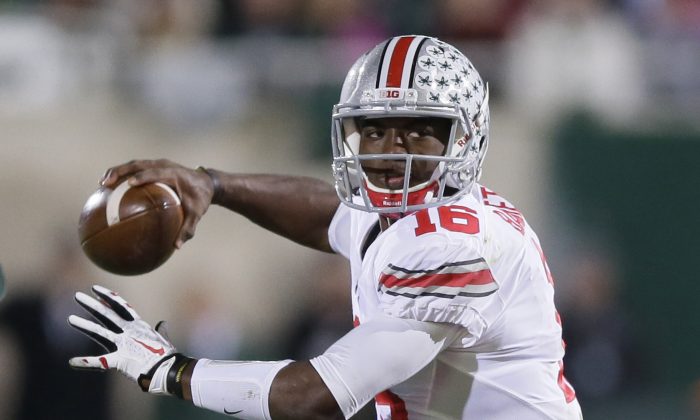 Three of the nation’s top 10 teams went down Saturday and two others (TCU and Florida State) narrowly escaped disaster as the college playoff foursome continues to take shape.

Here are the top 10 teams this week.

10. UCLA (8–2): Although the Bruins have a tough rivalry matchup this weekend, should they prevail, they’ll own the head-to-head tiebreaker over the three other two-loss teams in the highly competitive Pac-12 South division.

9. Michigan State (8–2): The Spartans rank sixth in the country in scoring despite quarterback Connor Cook completing just 53.5 percent of his passes over the last six contests. Unless the Buckeyes drop their final two games, Michigan State will miss out on the playoffs.

8. Ole Miss (8–2): After some shuffling this past weekend, the Rebels résumé is starting to look better. They’re still the only team that’s beaten Alabama, their two losses are by a total of seven points, and they still can redeem themselves with a late November win over Mississippi State.

This week: versus Arkansas. Previous rank: 10

7. Ohio State (9–1): In case you didn’t know, Buckeye freshman quarterback J.T. Barrett is the real deal. After torching the Spartans for 300 yards passing two weeks ago, he burned Minnesota for 200 through the air and another 189 on the ground, and accounted for four scores.

This week: versus Indiana. Previous rank: 7

6. Baylor (8–1): The Bears are right there with TCU and even though they beat them 61–58 at home in their matchup earlier this year, TCU gets a slight advantage here for having the more difficult nonconference schedule.

5. Texas Christian (9–1): The Horned Frogs are surely feeling fortunate to leave Kansas with a win yesterday after falling behind 27–17 in the third quarter. TCU, with the fourth-highest scoring offense in the country at 45.9 points per game, scored a pair of touchdowns later in the quarter to take control of the game.

4. Mississippi State (9–1): In the 25–20 loss to ‘Bama, the Bulldogs turned the ball over three times, got zero takeaways themselves, and never were able to take the lead. Still with just one loss, they have a chance to make the playoffs if they run the table.

This week: versus Vanderbilt. Previous rank: 1

3. Oregon (9–1): The Ducks are sitting pretty right now, needing only to win out against 2–8 Colorado and 5–5 Oregon State before a showdown in the Pac-12 title game against the winner of the South division. On the Heisman watch though, quarterback Marcus Mariota has some serious competition against Wisconsin’s Melvin Gordon, after Gordon ran for a record 408 yards against Nebraska.

This week: versus Colorado. Previous rank: 3

2. Alabama (9–1): The Tide currently boast the nation’s second-stingiest defense, allowing just 14.5 points per game. The three interceptions they grabbed against Mississippi State’s Dak Prescott Saturday were the most he’s thrown this season.

1. Florida State (10–0): I don’t think I remember a team that has pulled out as many come-from-behind wins to stay undefeated than the Seminoles. They’ve been playing on the edge since surviving Clemson way back in September. Against the ‘Canes, Florida State erased a 16-point deficit on the road against their biggest rival, to continue their dream season.