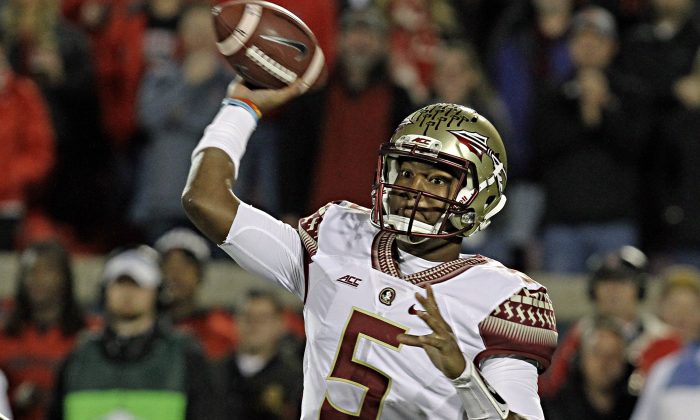 Another weekend of college football means more jockeying of teams for those four playoff spots. Oklahoma, Notre Dame, and probably even Michigan State are likely eliminated from the elite postseason but a number of others are still alive.

10. Ole Miss (8–2): The Rebels snapped their two-game losing streak with a 48–0 stomping of under-manned Presbyterian. They’re currently first in the NCAA in points allowed at 11.9.

9. Auburn (7–2): Auburn was incredibly fortunate to escape Ole Miss with a win a week and a half ago; conversely, they were incredibly unfortunate to fumble on their final two possessions in the three-point loss to the Aggies Saturday.

This week: at Georgia. Previous rank: 3

7. Ohio State (8–1): The Buckeyes have been miffed at their playoff ranking all season, and clearly played against Michigan State with something to prove. Still they’ll probably need to win out to make the playoffs.

6. Baylor (8–1): Art Briles has posted a number of great wins during his building of the Bears, but their 48–14 pasting of the Sooners, in Oklahoma, tops the list. Not only did they score the game’s final 45 points, they out-gained Bob Stoops’s squad by more than 200 yards.

This week: at Kansas. Previous rank: 8

4. Alabama (8–1): The Tide’s offense was held at bay for most of the game at LSU, but came alive at the end to steal the win. Wide receiver Amari Cooper continues to add to his impressive résumé, hauling in eight passes for 83 yards and is now the school’s all-time leader in receiving yards with 2,951 in his three seasons.

3. Oregon (9–1): Leading Heisman contender Marcus Mariota passed for 239 yards and three TDs and ran for another 114 yards in another stellar performance in the 51–27 win over Utah. He’s now thrown for 200-plus yards and two or more TDs in every game this season.

2. Florida State (9–0): Though the Seminoles won at Virginia 34–20, Jameis Winston virtually took himself out of the Heisman race after throwing two more picks—his 10th and 11th of the season. For the program though, it was their 25th straight win overall.

This week: at Miami. Previous rank: 2

1. Mississippi State (9–0): The Bulldogs have their stiffest challenge yet this coming weekend at Alabama. A loss puts them on par with a number of other teams and really muddies the playoff picture.

This week: at Alabama. Previous rank: 1