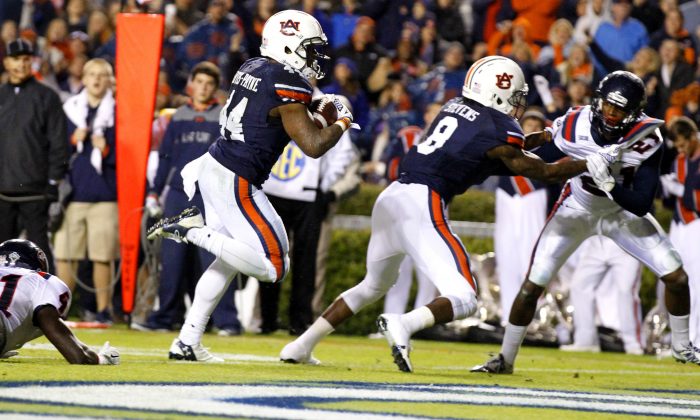 Auburn running back Cameron Artis-Payne (44) scores a touchdown during the first half of an NCAA college football game against Samford on Saturday, Nov. 22, 2014, in Auburn, Ala. (AP Photo/Butch Dill)
News

On the Ball: College Football Picks—Week 14

This is rivalry week in college football and lately the Iron Bowl has been king of the rivalry games. Of course, these rivalry games are the most difficult ones to predict. Records are often thrown out the window when these teams meet on the field.

Onto the picks (home team in caps):

(10–1) ALABAMA 31, (8–3) Auburn 27—The Iron Bowl has seen a couple of spectacular (or crushing, depending on your perspective) comebacks by Auburn the last few years. I don’t think they have the magic for another one this year.

(10–1) Oregon 31, (5–6) OREGON STATE 17—Corvallis is a difficult place to play—just ask Arizona State. Oregon’s on a mission to make the playoffs though. I don’t think they’ll get tripped up this time.

(11–0) FLORIDA STATE 41, (6–4) Florida 30—It’d be quite a story to see Will Muschamp go off with a win over the Seminoles—it’s not happening. Somehow Florida State keeps pulling out close wins week after week.

(8–3) OLE MISS 17, (10–1) Mississippi State 14—Another good one here. I think Ole Miss has something to prove after falling off the last few weeks.

(9–2) UCLA 24, (6–5) Stanford 14—Is this season the beginning of Stanford’s demise? This is the fourth year under David Shaw and the first time they haven’t reached the 11-win plateau (and they’re not even close) since 2009—Jim Harbaugh’s third season of an incredible reclamation.

(9–2) ARIZONA 28, (9–2) Arizona State 27—I’m going with the home team in what looks like the most difficult of these exciting rivalry games to call.

(6–5) ARKANSAS 28, (9–2) Missouri 17—Missouri hasn’t got much national respect, despite leading the SEC East, and they don’t get much here either. They already were blown out by Georgia 34–0 and somehow lost to Indiana, while their SEC wins haven’t been impressive.

(9–2) GEORGIA 34, (9–2) Georgia Tech 31—Certainly Georgia has had a talent advantage over Tech for a while, but I think the Yellow Jackets at least cover the spread—it’s a pride thing in these rivalries.

(9–2) PENN STATE 21, (6–5) Michigan State 14—I’m calling the upset here, partly because the Nittany Lions are due after a few close losses, and also because they have the fourth-best defense in terms of points allowed per game (16.0).

(8–3) Minnesota 31, (9–2) WISCONSIN 30—A dark-horse candidate for coach of the year has to be Jerry Kill at Minnesota. The Gophers keep climbing the ladder under his watch and last week’s win at Nebraska was a big step.

(8–3) LOUISVILLE 38, (5–6) Kentucky 20—I’m not averse to picking upsets, but the Wildcats haven’t won on the road since September 2010. Ironically it was against Louisville.

(7–4) Utah 31, (2–9) COLORADO 20—It’s amazing not only that Colorado has fallen this far, but they’ve been down for so long. This will mark their ninth straight losing season. This from a program that was a national power 20 years ago.

(11–0) MARSHALL 35, (6–5) Western Kentucky 21—One unanswered question with the whole playoff system is what a team like Marshall would do if they finished the year undefeated, but weren’t selected for the postseason tournament. I guess we’ll find out soon.