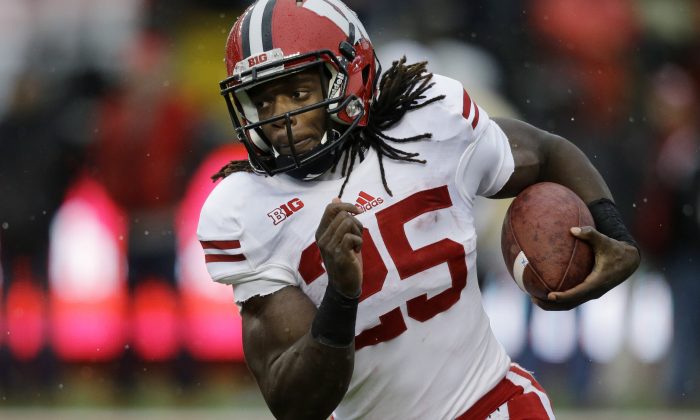 Wisconsin running back Melvin Gordon (25) runs for yardage during the first half of an NCAA college football game against Rutgers, Saturday, Nov. 1, 2014, in Piscataway, N.J. (AP Photo/Mel Evans)
News

On the Ball: College Football Picks—Week 13

Unlike last weekend when it seemed like every major program was on upset alert, only two of the top 10 teams in the College Football Playoff rankings (Ole Miss, UCLA) are on the road and in serious danger of an upset. Here are the picks involving the Top 25 teams according to the latest CFP rankings (home team in all caps):

(9–1) ALABAMA 49, (7–4) Western Carolina 3: Alabama has won three of four games against ranked teams this year. Meanwhile, Western Carolina lost to fellow punching bag Chattanooga 51–0 three weeks ago. This one should be over before halftime.

(10–0) FLORIDA STATE 38, (6–4) Boston College 20: The way Florida State keeps falling back in the rankings, despite winning every game, is probably motivating them even more. They didn’t play that well with that No. 1 ranking attached to them.

(9–1) OHIO STATE 42, (3–7) Indiana 14: Not only have the Hoosiers not won a Big Ten game this year, only one of their six conference losses was by less than 10 points. The Buckeyes need take care of business with ease to move up in the rankings.

(8–2) Ole Miss 21, (5–5) ARKANSAS 20: After a number of close losses, the Razorbacks finally got their first SEC win under Bret Bielema last week and should put up a good fight for another one this time around.

(8–2) UCLA 28, (7–3) Southern California 24: This is a bit of a tossup. The Bruins have a better overall record, though the Trojans lead them in the Pac-12 South standings. I’m going with the home team here.

(8–2) MICHIGAN STATE 38, (6–4) Rutgers 17: The Spartans only two losses are to playoff contenders Ohio State and Oregon. Rutgers has lost their two games against ranked opponents by an average of 28 points.

(8–2) ARIZONA STATE 49, (3–7) Washington State 38: The Cougars have quite a contrast between offense and defense. One the one side, they lead the nation in passing yards at 478 yards per game, but the defense is ranked 118th (out of 124 teams) in points allowed at 38 per game.

(7–3) Auburn 49, (7–3) Samford 10: Like conference foes Alabama and Georgia, Auburn is taking on an over-matched FCS opponent this week. The Tigers should have no problem with them.

(7–3) UTAH 24, (8–2) Arizona 21: The Utes have been a bit of a surprise this season, notching wins over UCLA, Southern California, and Stanford. Arizona has been surprisingly tough as well, as they’re just a half-game out in the Pac-12 South. I’m going with the home team on this one.

(8–2) Wisconsin 35, (7–3) IOWA 24: Don’t let Iowa’s record fool you. They haven’t played a ranked opponent yet, lost to Iowa State at home, and were blown out at Minnesota. Meanwhile Wisconsin ran all over Nebraska last week.

(8–2) Missouri 31, (5–5) TENNESSEE 28: With a home loss to lowly-Indiana on their résumé, the Tigers get little respect. But they’ve beaten South Carolina and Texas A&M among others and are first in the SEC East at 5–1.

(7–3) OKLAHOMA 34, (3–7) Kansas 13: The Jayhawks are playing much better under Clint Bowen, nearly beating TCU last week, but winning in Oklahoma is no ordinary task—even with the Sooners having to start backup quarterback Cody Thomas.

(7–3) CLEMSON 38, (1–9) Georgia State 0: Georgia State won their opener by a point, but has lost their last nine and only two were by less than 10 points. This one could be over before the first quarter ends.

(8–2) NEBRASKA 28, (7–3) Minnesota 21: The Cornhuskers success will largely depend on the health of running back Ameer Abdullah. Abdullah, who is listed as probable after suffering an MCL strain on Nov. 1, has just 24 carries for 70 yards in two games this month.

(7–3) NOTRE DAME 28, (7–3) Louisville 20: Since narrowly losing at Florida State on Oct. 18, the Irish’s defense has been in free-fall, allowing 46 points per game, while dropping two of three games. Here’s guessing that Brian Kelly gets his ship righted in time.