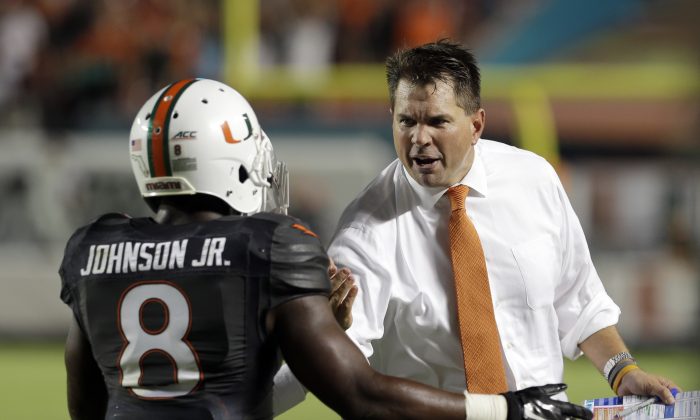 On the Ball: College Football Picks—Week 12

This looks like it could be upset Saturday. A number of top teams are in vulnerable positions, beginning with the Seminoles. Here are the picks involving the Top 25 teams according to the latest College Football Playoff rankings (home team in all caps; line, over/under as of Thursday):

(8–1) ALABAMA 27, (9–0) Mississippi State 21: Ever since their oft-criticized one-point win over Arkansas, the Tide have looked like a normal Nick Saban team—dominant and determined. The Bulldogs have had a great run, but winning in Tuscaloosa is no ordinary feat.

(6–3) MIAMI 34, (9–0) Florida State 31: I’m calling the upset here for three reasons: 1) it’s a rivalry game, 2) the Seminoles, and coach Jimbo Fisher in particular, are in denial about how they’re barely winning games anymore, and 3) Miami has had two weeks to prepare for this one.

(8–1) Texas Christian 31, (3–6) KANSAS 21: Normally TCU would mop the floor with Kansas, but I’m predicting a closer win because this game will likely be played in frigid, snowy conditions and the Jayhawks have played much better under interim coach Clint Bowen.

(8–1) Arizona State 38, (4–5) OREGON STATE 35: Oregon State has traditionally been tough at home, but they’ve lost three straight there this season and the Sun Devils are riding high after routing the Irish.

(7–2) GEORGIA 31, (7–2) Auburn 30: I think this is the toughest one to pick. Todd Gurley returns for Georgia and they’re at home. But at the same time, Auburn has a knack for coming out on top in close games. We’ll go with the home team here.

(7–2) Michigan State 45, (6–3) MARYLAND 27: Maryland at 3–2 in the Big Ten is maybe the biggest sign yet that the traditionally great conference is having a down year. The Terps have played just one ranked team (Ohio State) and lost by 28, at home.

(7–2) ARIZONA 38, (6–4) Washington 24: The Wildcats are still the only team to beat Marcus Mariota and Oregon. Washington is still finding it’s way under first-year coach Chris Peterson.

(7–2) WISCONSIN 34, (8–1) Nebraska 21: It’s never a good thing when your star running back has a knee injury, which is what Nebraska’s Ameer Abdullah is dealing with. Wisconsin can counter with Melvin Gordon, who’s on pace to rush for more than 2,000 yards.

(4–5) ARKANSAS 17, (7–3) Louisiana State 14: Second-year Arkansas coach Bret Bielema is 0–13 against the SEC since coming over from Wisconsin, but they’ve played Alabama, Texas A&M, and Mississippi State to single-digit losses over the last five games. This week the losing stops.

(7–2) NOTRE DAME 38, (3–6) Northwestern 28: The Irish allowed just 12 points per game through their first five, but have been burned for an average of 42 in the four games since. Still, they have enough to get past the Wildcats, who’ve lost four straight games.

(8–2) GEORGIA TECH 28, (7–2) Clemson 24: Though both teams have good records, neither team has won a game against a ranked opponent this year. An even matchup, I’m going with the home team, which has won its last three games by an average of 28.7 points.

(8–1) DUKE 34, Virginia Tech 31 (4–5): Duke has compiled their impressive record despite playing four of five conference games on the road and now finish out the season with three straight at home. How the Hokies beat Ohio State, I’ll never know.

Stanford has allowed the fourth-fewest points per game in the nations (16.1) and are playing at home, so I’m giving them the slight nod here.

(7–3) TEXAS A&M 38, (7–2) Missouri 31: It’s hard to believe Missouri is leading the forgotten half of the nation’s toughest conference—the SEC East—and yet is unranked. How they’re in the east is beyond me, but the wins they’ve had (South Carolina, Florida, Vanderbilt, and Kentucky) are unimpressive and are out-weighed by the 34–0 drubbing Georgia put on them.