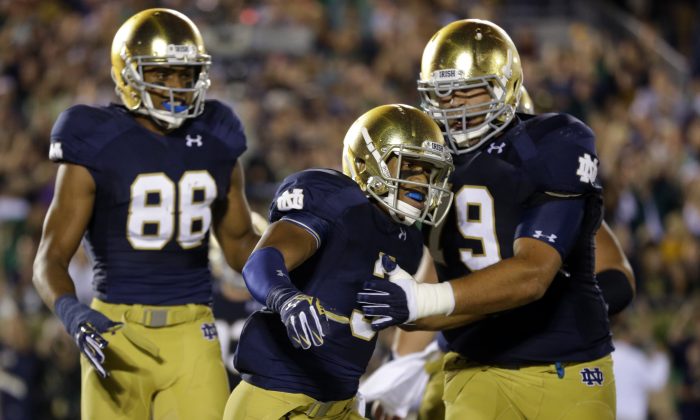 After a number of college football games this past weekend in the books, plenty of playoff contenders still exist. One of them isn’t Texas though, after getting blown out 41–7 by BYU, in a sign that the Longhorns rebuilding process won’t be overnight.

10. USC (2–0): If USC’s 13–10 win at highly regarded Stanford was any indication, the Trojans made the right call in hiring Steve Sarkisian as head coach. This week: at Boston College. Previous Ranking: NR

8. Georgia (1–0): The Bulldogs had the weekend off in preparation for this coming Saturday’s tilt at Steve Spurrier’s Gamecocks. Despite it being a road game, Georgia should be favored after South Carolina (1–1) struggled to a 33–23 win over lightly regarded East Carolina. This week: at South Carolina. Previous Ranking: 8

7. Notre Dame (2–0): Notre Dame’s historic 31–0 shutout of Michigan not only was the first time the Wolverines had been blanked since 1984, it elevated the Fighting Irish as a force to be reckoned with again this season after last year’s underwhelming 9–4 record. This week: versus Purdue. Previous Ranking: 9

6. Auburn (2–0): The Tigers, who rushed for 358 yards in the 59–13 win over San Jose State, continue to thrive on the ground in the pass-happy league that is NCAA football. Through two games they’ve racked up an average of 330 rushing yards per game—seventh-best in the nation. This week: at Kansas State. Previous Ranking: 5

5. Oklahoma (2–0): The Sooners have yet to be tested through two games this season (versus Louisiana Tech, at Tulsa) but they did what they were supposed to do in blowing out both teams. Former quarterback-turned-tight end Blake Bell had his first two collegiate catches in the 45–7 romp over Tulsa. This week: versus Tennessee. Previous Ranking: 4

4. Texas A&M (2–0): The Aggies racked up 630 total yards in the 73–3 laugher over Lamar as they continue to impress without former Heisman winner Johnny Manziel. New A&M quarterback Kenny Hill has seven TDs through two games in Kevin Sumlin’s high-octane offense. This week: versus Rice. Previous Ranking: 6

3. Alabama (2–0) While the Tide, which beat Florida Atlantic 41–0, tries to decide whether to start Blake Sims or Jake Coker at quarterback, wide receiver Amari Cooper is making them both look good and is emerging as a dark horse Heisman candidate in the process. Through two games, Cooper already has 25 catches for 319 yards and a touchdown. This week: versus Southern Mississippi. Previous Ranking: 3

1. Oregon (2–0): The Ducks were in some trouble, down nine early in the third against Rose Bowl champion Michigan State, before reeling off the game’s final 28 points to win going away 46–27. Heisman candidate Marcus Martiota led the charge with 318 yards passing and three TD passes for Oregon. This week: versus Wyoming. Previous Ranking: 1