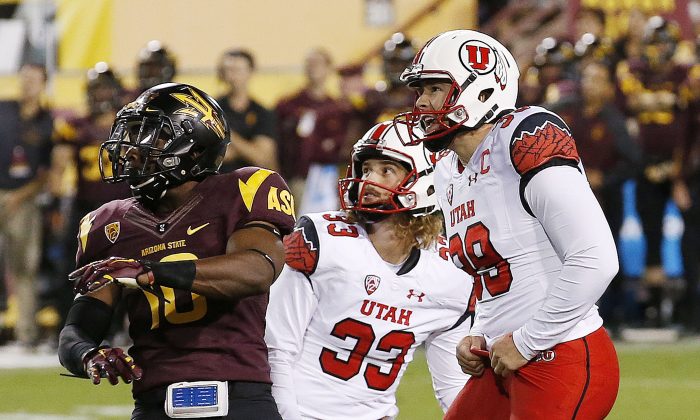 After going a whole two weeks without college football, those of us (like me) who are already going through football withdrawal get our fixes back starting this weekend—ten games over the next week, starting with five games on Saturday. Here are the picks:

(10–2) Colorado State 28, (8–4) Utah 24: I actually think the Utes are the better team here, but I think Colorado State has something more to prove. There’s probably a little chip on their shoulder after the Utes left their Mountain West Conference for the mighty Pac-12. They’re also dealing with the loss of their coach, Jim McElwain, who left for Florida.

(7–5) Nevada 38, (8–4) Louisiana-Lafayette 24: Nevada has the worse record here, but they’ve been much more impressive overall. Four of the Wolf Pack’s five losses are by seven points or less, and three of those were against ranked teams Arizona, Colorado State, and Boise State. Meanwhile, the Ragin’ Cajuns four losses were by an average of 28 points a game.

(9–3) Air Force 38, (8–4) Western Michigan 28: The Air Force Falcons had a nice regular season with wins over Boise State and Colorado State. Despite their air affiliation, though, they do their work on the ground, ranking eighth in the country in rushing yards at 272.8 per contest. The Broncos boast a high-scoring offense as well (34.6 points per game), so this could be a fast-paced affair.

(9–3) Memphis 34, (8–4) BYU 24: Memphis played a tough non-conference schedule this season (including UCLA and Ole Miss), and that went a long way in the Tigers going 7–1 in winning the American Athletic Conference. BYU recovered from the loss of quarterback Taysom Hill to win their final four games with Christian Stewart under center, but none were big enough to think they can beat Memphis.

(12–1) Marshall 41, (11–2) Northern Illinois 28: This looks like a fun matchup. Both teams love to run the ball and boast offenses with at least three players with 500 or more yards rushing. Marshall’s Devon Johnson tops them all, though, with 1,686 yards on the season while averaging 8.6 yards per carry as the Thundering Herd are fifth in the country in scoring at 45.1 per game.

(7–5) San Diego State 24, (7–5) Navy 21: The Midshipmen boast the second-best rushing attack in the country at 345.1 rushing yards per game, but I’m taking the Aztecs here based on common opponents. While they both beat San Jose State, Navy lost 30–21 to Air Force. The Aztecs, though, had little trouble with them, topping the Falcons 30–14. Besides, the game is right in San Diego.

(7–5) Western Kentucky 45, (7–5) Central Michigan 38: Western Kentucky’s main claim to fame this season was a wild 67–66 win over previously undefeated Marshall on Nov. 28. They boast a prolific passing offense (365 yards a game) but a defense that allows 39 points per contest—122nd in the nation. While Central Michigan faced a more difficult non-conference schedule (Syracuse, Kansas, and Purdue), they’ll need to go out of their comfort zone to score enough here to win.

(6–7) Fresno State 27, (7–5) Rice 20: The Bulldogs may not have a pretty record, but five of their seven losses are to teams playing in bowl games, and three were against major powers Nebraska, Utah, and USC. Besides, while neither team has a stellar defense, Rice just gave up 76 points in a blowout loss to Louisiana Tech.