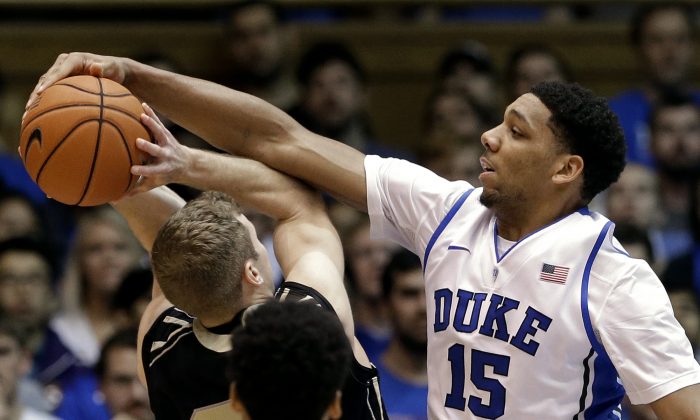 Normally I would say that December is way too early to predict an undefeated season—and I’m still going to stick by that here—but I think Kentucky is going to at least make the Final Four with a perfect record. They made North Carolina look silly in an 84–70 win and there’s no one else in the SEC that’s even close to the top 10 here. Here are the 10 best:

10. Virginia (9–0): The Cavaliers are first in the country in scoring defense (47.4 per game) and even held Rutgers to just 26 points in a late-November game. Offensively, they’re shooting a very respectable 48.7 percent from the floor. They boast wins over Maryland and VCU.

This week: versus Cleveland State (Thursday).

9. Texas (8–1): Defense is the strength of the Longhorns this season. Only once has Texas allowed more than 57 points (Kentucky scored 63). In their win Saturday over Texas State, the Longhorns held the Bobcats to just 27 points—for the game.

This week: versus Lipscomb (Tuesday), versus Long Beach State (Saturday).

8. Ohio State (8–1): The Buckeyes are a bit of a mystery team. Outside of their 74–63 win over Marquette, the only other respectable team they’ve played was Louisville, and they lost 64–55. They do start conference play at the end of the month though, so the schedule should pick up soon.

7. Villanova (10–0): The Wildcats are undefeated, yet their best win might be their 77–53 shellacking of 6–3 VCU. Not that they look bad though—especially after throttling Temple 85–62 in a game where both Darrun Hilliard II and Josh Hart put up 20 points.

This week: versus Syracuse (Saturday).

6. Wisconsin (10–1): Though the Badgers boast offensive star Frank Kaminsky, their real strength is slowing down the game and focusing on defense. The Badgers have held five of their 11 opponents to less than 50 points and rank seventh nationally in points allowed at 51.7 a game.

This week: no games this week.

5. Gonzaga (9–1): Gonzaga leading-scorer Kyle Wiltjer is averaging 17.2 points per game and has put up at least 20 points in four of his last six games. In the 87–74 win over UCLA, he had 24 points as the Bulldogs had little problem with the powerhouse program.

This week: versus Texas Southern (Monday), versus Cal Poly (Saturday).

This week: at Western Kentucky (Saturday).

3. Arizona (10–0): The Wildcats, who already boast wins over Gonzaga, San Diego State, Missouri, and Kansas State, were in top form in their 80–53 win over Michigan. Arizona shot 58 percent from the floor and out-rebounded the Wolverines 40–26 as the game was virtually over five minutes into the second half.

This week: versus Oakland (Tuesday), at UTEP (Friday).

2. Duke (8–0): Freshman center sensation Jahlil Okafor is the real deal. The 6-foot-11-inch, 270-pounder from Chicago is averaging 17.1 points, 7.6 rebounds, and 1.5 blocks per game thus far as the Blue Devils, who’ve already beaten Big Ten powers Michigan State and Wisconsin, are second in the nation in scoring at 89.1 per game.

This week: versus Elon (Monday), versus Connecticut (Thursday).

1. Kentucky (11–0): Even with the loss of junior forward Alex Poythress (torn ACL) there is no way the Wildcats won’t be favored in every game they play this season. They allow the second-fewest points per game in the country (48.0) and also block the second-most shots (8.3). Through 11 games, their average margin of victory is an eye-popping 28.2 points per contest.

This week: versus UCLA (Saturday).