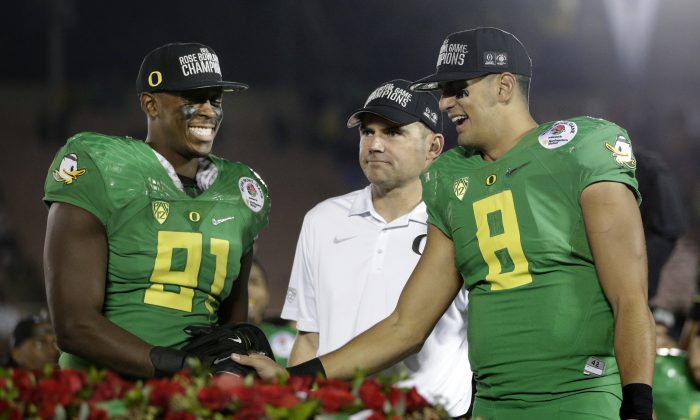 On the Ball: CFP Title Game Preview—Oregon Over Ohio State

The college playoffs have clearly been a hit. Some 28 million viewers tuned into each of the semifinal matchups on New Year’s Day, making them the highest watched cable TV shows ever. The only silly thing about the whole thing (besides the no automatic bids) is that they actually seed the teams 1–4—as if the one seed’s résumé is really discernibly better than the four seed’s.

I think the seeding actually comes into play too. Look at Alabama’s showing. While Ohio State came into the matchup as the four-seed with chips on their shoulders, the top-seeded Tide were a little tight—much like the pressure the top seeds face in March Madness.

In any case, the semifinals are over and the title game should be an entertaining finale Monday night. Here’s how matchups look to me.

When Oregon has the ball: The Ducks, who averaged 47.1 points per game (second in the nation), obviously had little trouble with Florida State’s average defense (they ranked 50th in points allowed at 25.6 per game) in the 59–20 semifinal blowout. Oregon was particularly good in the second half scoring touchdowns on five straight possessions to blow the game open. Heisman Trophy winner Marcus Mariota is far and away the highest-rated passer in the FBS with a 184.3 quarterback rating, partly due to his stellar 40/3 touchdown to interception ratio.

The Buckeyes defense ranked 15th (out of 128 teams) in yards allowed at 328 per game and has come up big in important games—like pitching a shutout against Wisconsin in the Big Ten title game. That said, I can’t see them having much success against Oregon’s fast-paced offense.

When Ohio State has the ball: What Urban Meyer has done, first with a second-string quarterback and now a third-stringer is amazing. Sophomore Cardale Jones came off the bench for the Big Ten title game and though he only attempted 17 passes, he completed 12 of them for 257 yards and three TDs.

He came back to earth against Alabama’s stingy defense going 18/35 for 243 yards with a TD and a pick, but he had help in both games from Ezekiel Elliott who ran for 220 yards against the Badgers and then 230 versus the Crimson Tide.

Oregon’s defense is 83rd in the country in yards allowed at 414 per game, yet only gives up 22.5 points per contest—good for 29th in the nation.

Coaching: While Meyer already has two championships under his belt, Mark Helfrich is the great unknown. We know he’s had little problem sustaining what Chip Kelly helped build at Oregon but how he does in this game will tell us a lot about him.

Intangibles: Alright I’ll say it: I think Oregon has been on a mission this season to win the national championship since August, while Ohio State was just hoping to get this far. Anytime you’re relying on a third-string quarterback with two starts under his belt, chemistry can still be an issue. Meanwhile, Mariota has been the starter three years running.