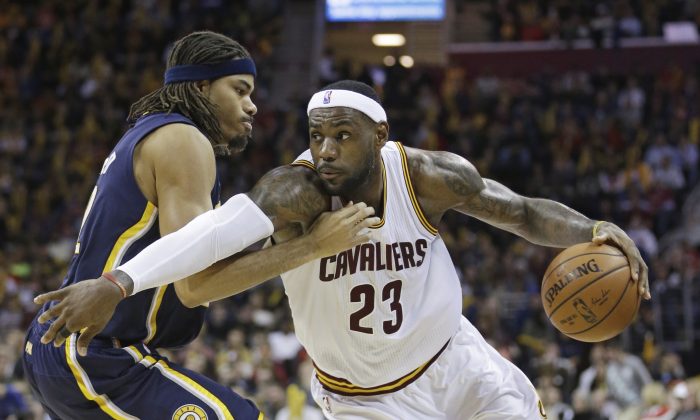 On the Ball: Best of the NBA—Top Five Small Forwards

Although point guard is probably the most stacked position in the NBA, small forwards currently are more top-heavy and have the biggest star power—just look at the top three names on this list.

There’s more star power to come here as up-and-coming rookies Andrew Wiggins and Jabari Parker look poised to break through in the next couple of years.

Here are the five best currently:

5. Rudy Gay, Sacramento Kings—Gay’s been putting up good numbers since his second season in the league (2007–08) when he averaged 20.1 points per game. Now playing for his third different team (also played for Memphis and Toronto), Gay’s numbers are up across the board this season at 21.1 points, 6.4 rebounds, and 4.4 assists—all career bests.

The only knock on him is that for all of his offensive output, only once have his teams reached the playoffs (2012) and even then, they lost in the first round.

4. Paul George, Indiana Pacers—George burst onto the scene with his performance in the 2013 playoffs when he led the Pacers to the conference finals, pushing the Heat to a full seven games. He averaged 19.2 points per game in those 19 postseason games. Last season, George set a career high in points (21.7) while being named to the NBA’s All-Defensive first-team and All-NBA third-team.

The only question mark on him is how well he returns from the gruesome leg injury he suffered this past summer for Team USA.

3. Carmelo Anthony, New York Knicks—”Melo” has been putting up great numbers since he entered the league in 2003 when he averaged 21.0 points per game as a 19-year-old for Denver. Since then, he’s added a scoring title (2012–13) and been named an All-NBA second- or third-team player six times.

His only downfall, besides not being an elite defender, is his lack of playoff wins. Although he’s been to the postseason 10 times in his 11 seasons, only twice have his teams advanced past the first round. He’s never played in an NBA final.

2. Kevin Durant, Oklahoma City Thunder—The reigning-MVP Durant has led the NBA in scoring four of the past five seasons and finished first or second in the MVP voting four times in that span. Last season marked the fifth straight year that the Texas alum was selected as an All-NBA first-teamer.

In fact, the only thing that separates the wiry Durant from LeBron James is his defense. Durant, who finally played his first game of the season Tuesday night after being out with a fractured foot, didn’t miss a beat, scoring 27 points in a Thunder loss.

1. LeBron James, Cleveland Cavaliers—Although Durant was named MVP last season, there’s little doubt who the best player in the league is—LeBron James. It was akin to when Barkley won MVP over Jordan in 1993 or Malone four years later—we all knew Jordan was the best, but sometimes he was the victim of his own success.

Still, LeBron has four MVP awards and has finished in the top 10 in the MVP voting every season since he entered the league straight from high school in 2003. Why? He does it all. Scores, rebounds, assists, and plays defense at the highest level—and at any position.