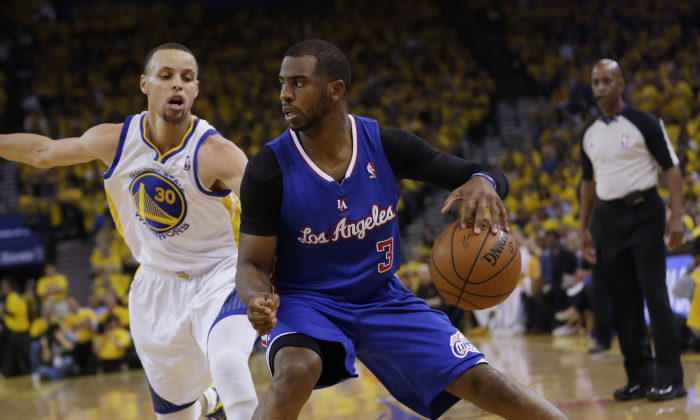 On the Ball: Best of the NBA—Top Five Point Guards

Everyone knows that finding a star big man—or even just a capable one—in the NBA is not a simple matter. Point guard is just the opposite—there are currently a number of great floor generals in the game. In ranking the five best here I had to omit players like Deron Williams, Damian Lillard, Kyle Lowry, Ricky Rubio, Rajon Rondo, and Kyrie Irving. Here are the five best:

5. Tony Parker, San Antonio Spurs—Parker was the first guy I penciled in here, because no matter what his stats say he’s always been able to win. The four-time NBA champion was just 19 when he entered the league back in 2001. Now in his 14th season, his crossover is still one of the fastest around and his ability to drive the lane and either get a shot off in traffic or find a open-shooter on the perimeter is uncanny. Currently the 32-year-old is averaging 19.1 points per game (26th in the league) and 4.7 assists (21st) while shooting an un-Kobe Bryant like 52.5 percent from the floor through seven games this season.

4. John Wall, Washington Wizards—It’s hard to believe Wall is already in his fifth season. The 24-year-old had been putting up some great under-the-radar numbers for the normally struggling Wizards until leading the team to the second round of the playoffs last spring. Wall led the league in total assists last season, though he also led the league in turnovers for the second time in three seasons. On defense though he was eighth in steals per game (1.8) last year and is second through seven games this season at 2.6.

3. Russell Westbrook, Oklahoma City Thunder—I was split on what to make of Westbrook when he first came into the league. Was he just another shoot-first point guard that was in a battle with teammates for shots (think Stephon Marbury) and actually making things worse or was he one of the rare breed who was able to score and still distribute the ball enough for his team to win? His role is still a conundrum with the Thunder, but as long as Kevin Durant keeps winning scoring titles and the team stays atop the league standings, it must be more of the latter. One thing that’s for sure is that the 26-year-old is one of the fiercest competitors in the league on both ends of the court. Westbrook, who has twice finished in the top 10 in points per game is athletic enough to be one of the top shooting guards around should Oklahoma City ever make the switch, but as long as it’s working there’s no reason to stop.

2. Stephen Curry, Golden State Warriors—Curry first made his name with Davidson in the 2008 NCAA tournament averaging 32 points per game in their run to the Elite Eight, while playing off the ball. Now at point guard in the pros, Curry has made the switch look seamless, ranking fifth in assists per game (8.5) last season while still leading the league in threes for the second straight year. The 6-foot-3-inch guard’s greatest trait is his ability to get his shot off against any defender thanks to one of the quickest releases in the game.

1. Chris Paul, Los Angeles Clippers—Paul entered the league as a 20-year-old in 2005 and quickly became the league’s best point guard not named Steve Nash. By his third season he topped the NBA in both assists (11.6) and steals (2.7) per game while playing with New Orleans. Now in his fourth season with the Clippers, Paul has been an All-NBA first-team player as well as an All-Defensive first-team selection each of the past three years. The only thing that’s missing from his résumé is an NBA title, which isn’t too far off with Doc Rivers at the helm.