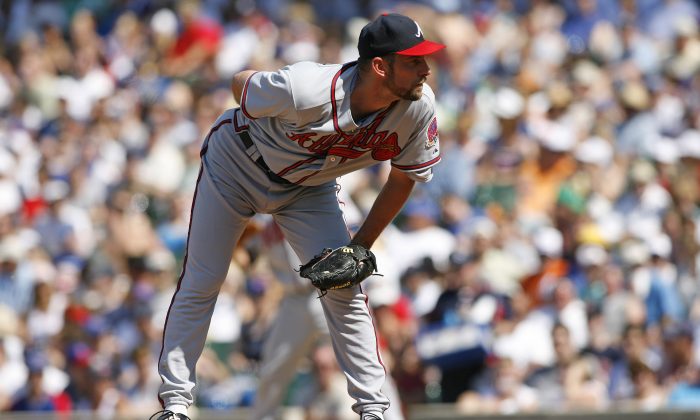 Atlanta’s John Smoltz, in this May 28, 2006 photo, won 210 games for the Braves after coming over to Atlanta for Doyle Alexander back in 1987. (G. N. Lowrance/Getty Images)
News

On the Ball: Baseball’s Most Lopsided Deadline Deals

We’ve seen it in baseball a million times before. A contending team in need of some help mortgages its future by sending some prospects for an established player, in hopes of winning the World Series.

It’s a gamble on both sides, that only sometimes works out equally. Think back to 2000 when the New York Yankees acquired David Justice from Cleveland for Jake Westbrook, Ricky Ledee, and Zach Day.

While the then 34-year old Justice’s presence in the Yankees lineup reinvigorated a team that was just 38–36 at the time, and led them all the way to yet another World Series title, Westbrook ended up as an All-Star starting pitcher in 2004 and won 105 games in a 13-year career.

But sometimes the package of prospect(s) given up is too much and the losing team never hears the end of it. Here are the five most lopsided deadline deals over the past 30 seasons:

This was an unusual deadline deal as Ramirez was not the typical veteran being dealt (just 25 at the time) and had a number of good years ahead of him as the Cubs third baseman. Even as late as 2012, Ramirez hit .300 with 27 home runs, 50 doubles, and drove in 105 runs.

Lofton, then 36, hit .327 and stole 20 bases in 56 games as a nice top-of-the-lineup rental for the Cubs. The two helped lead Chicago to the playoffs before falling to Florida in seven games in the NLCS in what is best remembered as the Steve Bartman series.

The Pirates, which did the deal more as a salary dump and were never in the pennant race, got little help from any of the players in the deal and watched Ramirez finish in the top 20 of the MVP voting five times over the next nine seasons.

At first this deal was actually seen as a win-win. Alexander, then 36, was unbelievable for the Tigers going 9–0 in 11 starts with a 1.53 ERA—tremendous value for a rental. And as was the hope, the Tigers made the playoffs but lost to the Twins in the ALCS.

Alexander actually followed that up with an All-Star appearance the next season before leading the league with 18 losses in 1989, his final season.

But Smoltz as part of the vaunted Maddux-Glavine-Smoltz trio went on to win 210 games for the Braves, the 1996 Cy Young Award, and was one of the most dominant postseason pitchers of all-time, sporting a 15–4 record with a 2.67 ERA.

Here’s how bad this was: Anderson, 37 at the time, posted a 1.23 ERA in 22 innings for the first-place place Red Sox, who were summarily swept in the postseason by the well-oiled machine that was the Oakland A’s. He then signed with San Diego in the offseason and that was it.

Meanwhile, Boston gave up one of the greatest power-hitting first baseman of all-time in Bagwell, who would have made an awesome 1-2 punch with Mo Vaughn in the Red Sox lineup for most of the 1990s. All in all, “Bags” hit 449 home runs, won the 1994 MVP, and had eight seasons of 30-plus home runs and 100-plus RBIs.

Seattle went on to make the playoffs in 1997, so at least they can say that. But the then 31-year old Slocum, who lasted just a year and a half with the Mariners, going just 2–9 with a 4.97 ERA, wasn’t much help.

Meanwhile, Varitek would be Boston’s catcher for the next 14 seasons, earning three All-Star nods while becoming team captain.

Both were integral parts of the Red Sox 2004 World Series-winning team, while Varitek was also part of the 2007 championship squad.

There’s not much redeemable about this deal for the Expos. They were just 51–53 at the time of the deal and finished 83–79—all of 19 games behind the first-place Braves and 12 out of the wild card. To make matters worse, Montreal then flipped Colon to the White Sox that offseason, along with Jorge Nunez, for a washed-up Orlando Hernandez and unknowns Rocky Biddle and Jeff Liefer. Yikes.