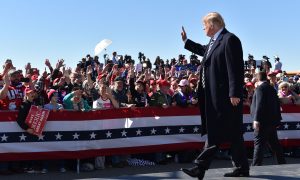 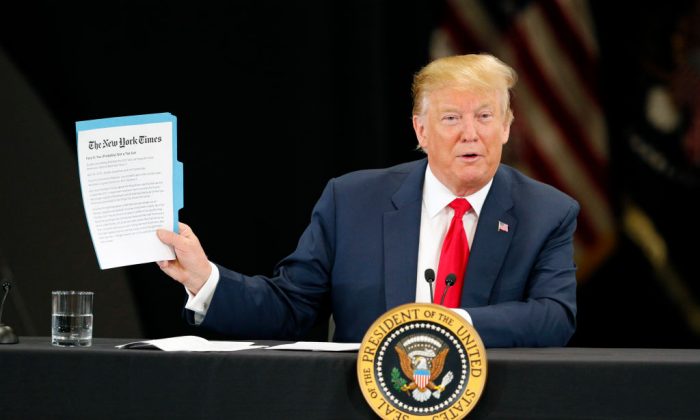 President Donald Trump speaks at a roundtable on the economy and tax reform at Nuss Trucking and Equipment in Burnsville, Minn., on April 15, 2019. (Adam Bettcher/Getty Images)
Trump Administration

On Tax Day, President Donald Trump touted tax reform and the U.S. economy, saying, “We promised that these tax cuts would be rocket fuel for the American economy and we were absolutely right.”

Speaking at a roundtable event on tax reform in Burnsville, Minnesota, on April 15, Trump called the Tax Cuts and Jobs Act of 2017 the “largest package of tax cuts and reforms in American history.”

He said more than 80 percent of U.S families received a tax cut and over 6 million people benefited from pay raises.

The sweeping tax reform bill, which was signed into law in December 2017, reduced the corporate tax rate from 35 percent to 21 percent. The bill had a positive effect on business investments and hence economic growth. Companies accelerated their capital spending in 2018 to take advantage of the tax cuts and the full expensing provision.

Democrats have opposed the tax reform bill from the start. They have repeatedly pushed the notion that tax reform is showering benefits on big corporations and wealthy citizens. And they have called the strong economic growth a “sugar high,” a short-term and unsustainable boost to the economy.

At the roundtable, Trump boasted about the strong jobs number and stock market performance.

“We have over 6 million new jobs in this country. Nobody would have believed that was possible,” he said.

“These things don’t happen by accident. It could all go away very quickly,” he said, adding that if the wrong people take office “everything that we’ve done can be undone.”

At the roundtable, Trump also mocked The New York Times, calling it “the very fake New York Times.” He showed the audience a printout of an article titled, “Face It: You (Probably) Got a Tax Cut.”

“In other words, they are really pretty upset. You could tell where they’re coming from,” Trump said.

According to The New York Times article, many Americans don’t feel they benefited from tax cuts despite the fact that they did.

Trump responded to the article by saying, “Many people don’t know [the benefit] but a lot of businesses know it because they’re the ones that are supplying the jobs because of the tax cuts,” he said.

“And many large corporations are able to bring back money into the country,” he added. “Tremendous things are happening with respect to jobs.”

By reducing the tax rates on earnings, tax reform enabled multinational firms to bring home significant amounts of cash. According to a report from the U.S. Chamber of Commerce, U.S. corporations repatriated nearly $600–700 billion of their global earnings in the first three quarters of 2018.

The chamber, which is the nation’s largest business organization, had long advocated for comprehensive tax reform. The organization stated that businesses of all sizes benefited from tax cuts and used their tax savings to expand their operations and create new jobs.

“Can’t say enough about it,” he said at a press call hosted by the chamber.

He said the Tax Cuts and Jobs Act enabled him to invest in new equipment and hire 18 more people. The new employees and investment helped him grow his business by 34 percent in 2018.

“We would likely not have had the confidence or the capital to invest in that piece of equipment without that act being passed,” he said. “Since then we’ve purchased two additional tax cut trucks.”

The full expensing provision of the tax bill has allowed businesses to expense the full value of capital expenditures and take the entire deduction in the first year.

“We were having a hard time growing the business. Then in 2017 things really started to turn around for us,” said David Mahoney, who runs a small gas distribution and welding supply business based in upstate New York.

“I couldn’t be happier with what’s been going on with the tax cuts,” Mahoney said, adding that he is considering investing in more equipment.