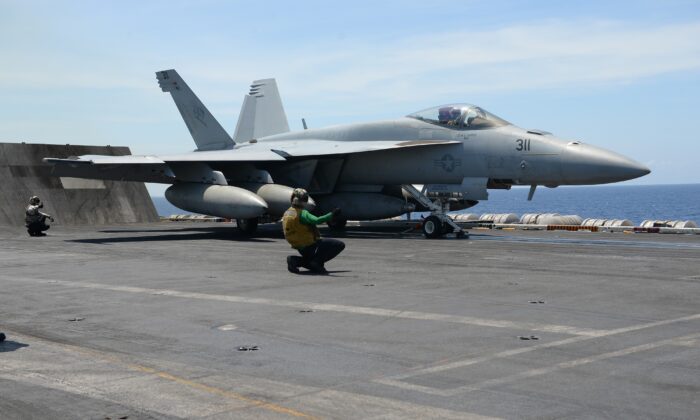 A sailor signals an FA-18 hornet fighter jet to take off from U.S. aircraft carrier Theodore Roosevelt in the South China Sea on April 10, 2018. (Ted Aljibe/AFP via Getty Images)
Viewpoints

On Taiwan: Can America Get Its Act Together?

I think it’s more than fair to say that the United States doesn’t have a Taiwan policy. Believing in strategic ambiguity, which is what many in the administration and a lot of so-called smart scholars think is a policy, definitely doesn’t measure up as one.

In fact, if your strategic concept is ambiguous, then you have no firm direction and no reason to execute any program, other than sit on a log and scratch your head—or whatever else you scratch.

A policy implies that one has a program that can be applied. In regard to Taiwan, there isn’t one.

Of course, there’s “guidance” in the Taiwan Relations Act of 1979 (TRA). The TRA was a desperate measure by Congress after President Richard Nixon and Secretary of State Henry Kissinger decided to abandon Taiwan and embrace China.

But what does the TRA do? In effect, not much, except for one key provision that reads as follows: The TRA “declares that in furtherance of the principle of maintaining peace and stability in the Western Pacific area, the United States shall make available to Taiwan such defense articles and defense services in such quantity as may be necessary to enable Taiwan to maintain a sufficient self-defense capacity as determined by the President and the Congress.”

Take careful note that the TRA doesn’t commit the United States to do anything more than supply “defense articles” to enable Taiwan to have a “sufficient self-defense capacity” that will be determined by the president and Congress.

In practice, it has meant selling largely second-hand equipment to Taiwan and making sure that the democratic island has no offensive firepower. When Taiwan decided to build its own fighter plane, called the F-CK-1 Ching-kuo, the United States would only authorize small engines for it and limited the plane’s fuel capacity so that it would be of no use against China.

But even if the United States actually supplied front-line, first-class equipment to Taiwan, it’s simply ludicrous to think that Taiwan, an island of 23.57 million people could stand up to China, which has a population of 1.402 billion people and a strong military to match its population size and wealth.

With this in mind, it’s very clear that Taiwan needs help to stave off any Chinese invasion. Every serious analyst knows this to be the case. Had the United States not intervened with two aircraft carrier task forces in 1996, Taiwan would have been toast.

China, under the guise of carrying out a missile exercise in the seas around Taiwan, was getting ready to launch an invasion force. But with President Bill Clinton finally deciding to move two aircraft carrier task forces into the area to intercede between China and Taiwan, China’s leaders backed off, and there was no invasion.

Since that time, China has been working on finding answers to U.S. military power, focusing heavily on aircraft carriers, China’s No. 1 nemesis. Just recently, satellite photos revealed a mock-up of a U.S. aircraft carrier in a new shooting range in the Taklamakan Desert in Xinjiang. The fake carrier includes a rail undercarriage, so China can practice shooting at a moving aircraft carrier.

China has a relatively new missile, the DF-21D, which it calls a carrier killer. Allegedly, the missile can travel more than 1,000 miles and destroy a carrier. It’s likely that the DF-21D can be shot out of the skies by the U.S. missile boats that always accompany U.S. carriers, but no one knows for sure. Meanwhile, China is trying to sharpen its skill at hitting a carrier, suggesting that they lack confidence that their missiles are all that good.

China has also built a number of sophisticated helicopter assault ships for a future Taiwan invasion, including the Yuchao class Type 071 and the Yushen Type 075 amphibious assault ships. China believes that if it can blast Taiwan’s airport runways and shoot down its F-16’s, Taiwan will lack the means to stop an amphibious assault on the island.

But China’s big fear is U.S. airpower, particularly U.S. stealth fighters. China’s Chengdu J-20 (known in China as the “Mighty Fighter”) is a stealth air superiority fighter that’s better than anything Taiwan has and is modeled on the U.S. F-22 Raptor. But, according to most experts, the Raptor is far better than the J-20, and, more importantly, it’s the only fighter aircraft China really fears, because it can defeat Chinese aircraft and air defenses.

Yet the United States has no F-22s in the western Pacific, not even on Guam, which is far away from Taiwan. It’s true that the United States deployed 25 Raptors to Guam and Tinian as part of a big air exercise called Operation Pacific Iron. But afterward, they went back to their bases in Hawaii and Alaska.

Given China’s serious preoccupation with the F-22—or perhaps fear is a better word—it would make sense to base them near where the action is, such as in Japan or on Okinawa. Yet the Biden administration has been reluctant to do anything more than air and sea exercises and isn’t strengthening the U.S. capability where it’s most needed.

Anyone who reads the constant reports on China’s new weapons might feel that America’s defeat is inevitable and the best policy isn’t to try and get in China’s way. That approach can be found in the Pentagon, which appears to have convinced itself that it will lose any fight with China if we tried to come to Taiwan’s assistance in an attack from China.

To buttress its negativity, the Defense Department—sometimes on its own, sometimes with contractors such as Rand Corporation, and sometimes in collaboration with think tanks—has run any number of simulations and war games, all of which tell Pentagon decision-makers that they can’t win a fight with the Chinese.

But all these exercises have major flaws. They assume that China’s military will perform flawlessly and that its military equipment will work perfectly. Such assumptions go way too far, as China’s new hardware isn’t battle-proven, nor is it clear that Chinese systems work anything like advertised.

Worse still, once the Pentagon convinces itself that it’s hopelessly outgunned, it doesn’t develop plans to challenge the Chinese. Real deterrence involves convincing a potential adversary that you have the means to fight and win.

If the United States were practicing deterrence, it would be doing a lot more than carrying out some military exercises against a phantom enemy or threat. The United States wouldn’t allow Chinese fighters and bombers to circle around Taiwan, violating Taiwan’s Air Defense Identification Zone and crossing the dividing line that has kept both sides apart for many years.

Just as we shadow Russian planes that fly near our coastline, the United States should be shadowing China’s aircraft around Taiwan’s airspace. More than that, we ought to be coordinating operations with the Taiwan Air Force (officially the Republic of China Air Force) and with our allies, especially Japan.

As things stand now, Washington is talking out of both sides of its mouth when it comes to the threat from China. We’re making dubious deals with China, even while it’s behaving more aggressively. This makes little sense, unless the U.S. intention is to surrender to the Chinese. For sure, Washington doesn’t have a policy that can prevent war in the region and is behaving in a contradictory and confused manner. Any more of this and the Pentagon’s war games will become a self-fulfilling prophecy.