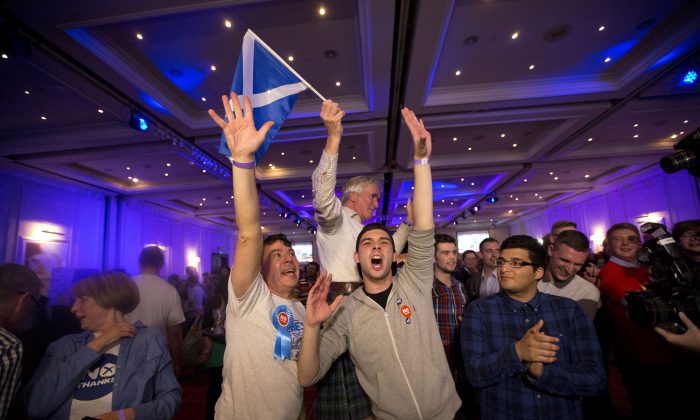 Supporters of the No campaign for the Scottish independence referendum celebrate after the final result was announced at a No campaign event at a hotel in Glasgow, Scotland, Friday, Sept. 19, 2014. (AP Photo/Matt Dunham)
Europe

BRUSSELS —European officials applauded the results of the referendum held in Scotland yesterday with 55 percent voting to stay with the UK and 45 percent in favor of becoming a separate nation.

“I think around Europe, politicians were really worried that Scots will vote to leave U.K . and is going to create political chaos in Europe,” said Giles Merritt, Secretary General of Friends of Europe, a leading political think tank in the EU.

European experts say the people of Scotland had a fair chance to voice their opinion and the U.K. can be proud of its democracy.

“First of all it’s a big success for democracy, because this referendum has taken place peacefully,” said Henri Malosse, President of the European Economic and Social Committee, a consultative body to the European Union, which acts as a bridge between government and civil society.

He said although large part of Scotland would be disappointed, such a large voter turnout, over 84 percent, meant it was a democratically made decision.

There are some lessons European politicians can take away from this, says Merritt.

“The first lesson is, we must make politics much more about people. In that way we restore the democratic dynamism,” he said. “You must take voters seriously, you must not assume that the vote is sort of pre-determined, that it is fixed.”

The next step for U.K. government is to keep its promises to the Scottish people for greater autonomy. This includes much greater control over taxes and spending, and essentially full rule on all matters but national security and Scotland’s monetary policy.

The promise of more political power may go beyond Scotland as well. Other parts of the U.K. with strong regional identities, such as Wales and Northern Ireland, may also want more independence.

Experts say the referendum has a lesson for the whole of Europe as well.

“I think that the most important for the EU was not the result, but the debate. It was the necessity in the regions which have a strong identity, such as Scotland and some others – it’s important to give to the people more power, to have more decentralization,” said Malosse.