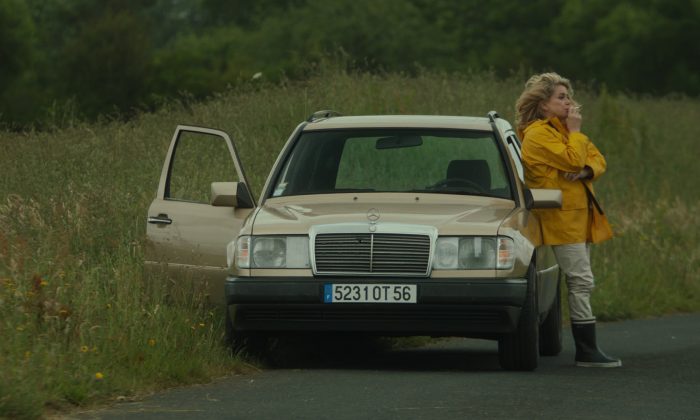 Catherine Deneuve as a drifting older woman in “On My Way.” (Cohen Media Group)
Entertainment

‘On My Way’: Catherine Deneuve Takes a Road Trip

A former Miss Brittany, Bettie has always been able to turn men’s heads, but that does not necessarily mean she has an aptitude for business. No, seriously, it doesn’t.

With her bills and the disappointments of life compounding, she sets out on an impulsive road trip in Emmanuelle Bercot’s “On My Way.”

For years, Bettie has settled for being the mistress of the man she thinks she loves. However, when he leaves both her and his wife for a much younger woman, Bettie loses her only reason for staying in her ever-so-provincial town. While serving lunch at her soon-to-be-insolvent restaurant, she suddenly ups and leaves in search of cigarettes. She will range pretty far in search of smokes, but why not?

After a night of drinking at a roadhouse and an incredibly awkward tryst, Bettie finally gets a justification for her walkabout. Her estranged, nearly unemployable daughter needs her to drive Charly, the grandson she barely knows, to his paternal grandfather’s house so she can leave for a dubious job abroad.

Of course, it will not be a smooth ride, but at least “On My Way” picks up speed as it goes along. As viewers learn Bettie’s backstory, they will become more apt to forgive her dubious decisions, but she remains a hard figure to fully embrace.

That makes her psychologically realistic, but also a bit of a pill to spend screen-time with. Likewise, Bercot’s real-life son Nemo Schiffman is certainly convincingly churlish as the androgynous Charly. However, in his screen debut, painter Gérard Garouste supplies exactly the sort of worldly gravitas the film needs as Alain, Charly’s curmudgeonly grandpa.

Like a cross-country drive, “On My Way” has its highs and lows. While Bettie is essentially the sort of sexually confident senior that Shirley MacLaine used to specialize in, her chemistry with Garouste, the nonprofessional thespian, is fresh and appealing.

Pleasant enough, but overly susceptible to unnecessary detours, “On My Way” is mostly recommended for Deneuve’s older Francophile fans when it opens March 14 in New York at the Lincoln Plaza Cinemas.