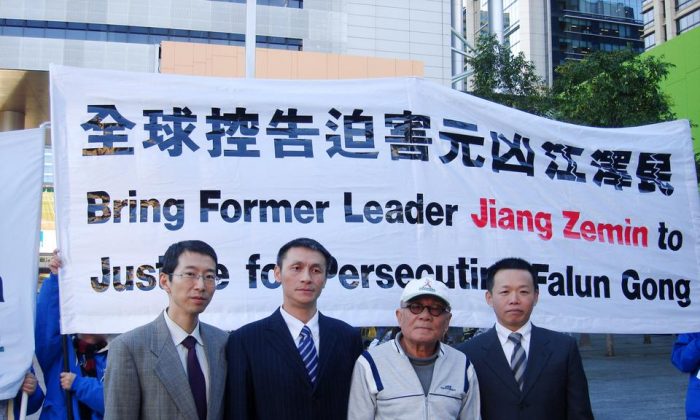 Xie Weiguo stands second from left in Brisbane on July 14, 2015. With him are, left from right, John Meng, Qiu Cuiliang, and Yu Ping, all of whom filed criminal complaints against former Chinese leader Jiang Zemin recently. (Minghui.org)
Commemorating July 20

A star graduate of China's MIT, Tsinghua University, reflects on how he became an enemy of the state 16 years ago

My life changed on July 20, 1999. The events that began on that date are the most painful and indelible in my memory. But mine wasn’t the only life that changed course: tens of millions of Chinese people were instantly stripped of their human rights and freedoms, many lost their jobs, and others lost their lives. All because they practiced Falun Gong, a spiritual discipline that teaches abiding by the principles of truthfulness, compassion, and tolerance.

Before that disaster 16 years ago, hundreds of students and staff at my alma mater, Tsinghua University, which is commonly known as China’s MIT, practiced the gentle, rounded Falun Gong exercise movements, bathed in the soft light of dawn or dusk, accompanied by traditional, melodious music. Such beautiful scenes took place every day at hundreds of thousands of exercise sites across China throughout the 1990s. Recalling it brings back warm memories.

Falun Gong (also known as Falun Dafa) was taught to the public for the first time by Mr. Li Hongzhi in 1992, in a city in China’s northeast. It is a traditional practice of self-improvement, or internal cultivation, drawing from a millenia of deep tradition. Such practices were usually the province of solitary Taoist or Buddhist cultivators—but Falun Gong calls for living according to the same moral discipline while living in today’s complex society.

Since it was founded, Falun Gong has spread to 70 countries around the world. In China, between 70 million and 100 million people practiced it before the persecution, according to official figures from the Sports Administration and Falun Gong estimates.

I began practicing Falun Gong in 1994 when I was a student of chemical engineering at Tsinghua. Remarkably, my insomnia and stomach pains went away, and I was able to be much more efficient in my studies. I won the highest Special Award at the university, and my story made the front page of the university journal New Tsinghua in the Chinese New Year’s edition of 1999, with my photo on the cover.

Falun Gong practitioners at Tsinghua were delighted when Mr. Li came to lecture about the publication of “Zhuan Falun,” the main book of Falun Gong teachings, at a ceremony at the university in early 1996. The photo he took with students brings me a happy feeling of being at home, an authentic image of the era.

But just three years later, everything changed. The head of the Chinese Communist Party, Jiang Zemin, launched a brutal persecution of our beliefs. We knew that other members of the Politburo Standing Committee, which rules China, did not support the campaign.

I went to the central state offices to appeal for Falun Gong on that very day, and was thrown in a bus and held in a stadium with tens of thousands of others. We were kept without food or drink until nightfall, and then released. No legal process was followed.

The next day, we went back to appeal—and the same thing happened. The police used the stadium speakers to blast anti-Falun Gong propaganda that maliciously slandered Mr. Li and Falun Gong. Later, thousands of practitioners were taken away in buses—to where, we didn’t yet know. But we learned later that many ended up in the regime’s labor camps or prisons, where they were tortured and brainwashed.

I was one of the lucky ones. I had received a doctorate scholarship from the University of Manchester earlier in the year, and was awaiting my UK visa. I was told that given my recent acclaim at the university, the head of the 610 Office, the extralegal Party agency set up to coordinate the suppression of Falun Gong, had personally listed me as a “model case” for persecution: someone who should be denied financial security, have his reputation ruined, and be physically destroyed—the three key directives that emerged as the basis of Jiang Zemin’s persecution of Falun Gong practitioners.

I stayed off campus until my visa arrived, and promptly fled to England on Aug. 12, 1999. I was safe, but the persecution was just getting started.

In my years abroad, I helped to set up the Falun Gong Student’s Association at the University of Manchester, which quickly became popular, and a thorn in the side of Chinese consular officials who tried to shut it down. A Falun Dafa website that we hosted was inundated with cyberattacks, and at one point my department website was hacked and plastered with red Chinese characters. I received phishing emails, and notes slandering Falun Gong. All this was tremendously inconvenient to our IT staff.

In 2004, my passport was effectively canceled, and I became stateless: visa extensions became a bureaucratic nightmare, changes of address in the U.K. were also burdensome, and I couldn’t travel to other countries for conferences related to my research. British members of Parliament wrote supporting documents to try to advance my case, but the Chinese Embassy ignored them.

A number of Falun Gong practitioners who I knew well, my old friends, were killed in the persecution. I’ll never forget them.

There was Yuan Jiang, always a lively presence at the practice site, who died on Nov. 9, 2001, after being tortured with all sorts of cruel instruments. When I learned of his death I cried uncontrollably. We had been good friends, traveling around Beijing to teach the exercises to others.

Professor Gao Chunman was also killed by the Communist Party. He was my supervisor in the Special Research Talent Training Program in the department of chemical engineering. When professor Gao began Falun Gong, he quit smoking immediately, and he started the first Falun Gong exercise site at Tsinghua. He fled to Russia after the persecution, but was arrested and taken back to China in 2007; after years of harassment and persecution, he passed away at 76, in early 2011.

Despite the horrors of this brutal campaign, things in China are changing rapidly. Much of the anti-corruption campaign carried out by the new Communist Party leadership, under Xi Jinping, has focused on purging the political base of Jiang Zemin.

Bo Xilai, the former Politburo member whose case became international news, built his career on the persecution of Falun Gong—he is now in jail for life. Zhou Yongkang, Bo’s accomplice and the man who drove forward the persecution nationally for nearly a decade, was also recently jailed for life. Li Dongsheng, former leader of the 610 Office, and one of the leading propaganda masterminds against Falun Gong, was also purged last year.

The 610 Office has now been left without any leadership. Parts of the forced labor camp system, the main apparatus used to persecute Falun Gong, have also been shut down.

Of course, these changes do not mean the persecution has stopped. And Xi Jinping, as leader of the Communist Party, is seeking to secure his political power—not seek justice for Falun Gong. But only by coming to terms with this overwhelmingly cruel campaign can China get on the right path.

In the lead up to this anniversary of July 20, I joined a criminal complaint against Jiang Zemin, submitted by dozens of Tsinghua alumni. Jiang is directly responsible for the crimes against us. Now, we want to bring him to justice.

Our complaint was submitted to the Supreme People’s Court and the Supreme People’s Procuratorate, China’s highest court and prosecuting office respectively. We demand that the persecution and defamation of Falun Gong cease, that the 610 Office be abolished, its illegal activities investigated, those responsible for the persecution punished, and Jiang Zemin be put on trial for crimes against humanity, including torture and genocide. Only when all that happens will the great nation of China have the chance for a new future.