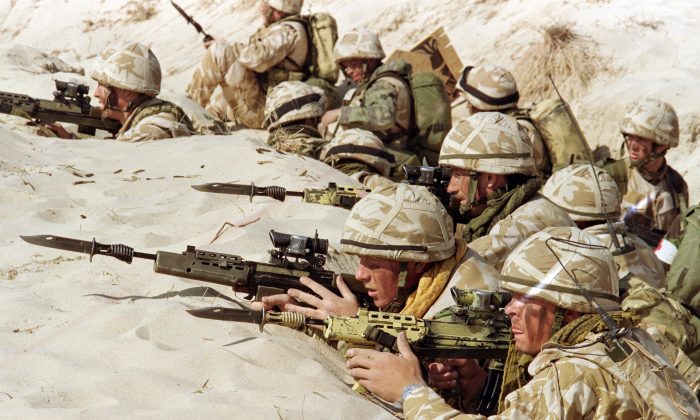 British soldiers from the First Stafford, also known as the "Desert Rats," stand in a trench somewhere in Saudi desert, ready to attack during a live ammunition exercise, featuring the capture of an Iraqi positions, on Jan. 6, 1991. (Patrick Baz/AFP/Getty Images)
Europe

On Its 25th Anniversary, Why the First Gulf War Is Britain’s Forgotten Conflict

There’s something of a tendency in Britain to want to remember modern conflicts that—whatever else they may also be—can be presented as triumphs (such as World War II and the Falklands), disasters (which would certainly include Suez and Iraq), or conflicts so profound as to be both (World War I, pre-eminently).

It’s 25 years since Operation Granby, Britain’s contribution to Operation Desert Storm: the removal of Saddam Hussein’s Iraqi forces and the restoration of Jaber al-Ahmad al-Sabah as Emir. For many in this country at least—and despite its scale—the Gulf War is a “forgotten war.”

The Gulf War remains a war in which Britain played a role, but a war which has played less of a role in Britain.

One reason for this relative lack of prominence is that the objective for the operation was clear, the mission straightforward, the combatants mismatched and the whole thing over in a month. It was a mechanized engagement on broad open battlefields, with none of the hand-to-hand fighting or improvised explosive devices (IEDs) of other conflicts.

There were also, given the size of the deployment, relatively few British casualties. That’s no comfort to those who knew the 47 who did die, but a number dwarfed by the losses in Palestine, Malaya, Korea, Cyprus, or Northern Ireland. Britain was, moreover, one of 33 other participants in a grand coalition. (As a senior non-commissioned officer (NCO) in the war told me last month, “we were a pimple on the backside of the Americans.”)

Another reason is that the operation was ultimately overshadowed by a much more controversial deployment in the same region some years later. Granby came in between the Falklands and the wars of “liberal interventionism” (for some an oxymoron, for others an enduring principle) at the end of the century. In the most significant of those, Operation Telic, Britain was more than a pimple, and the scars commensurately deeper.

The last reason was Britain’s war leader. Just as “George Bush” means for most people the president who oversaw the overthrow of Saddam rather than the father who kept him in power, John Major has slipped from collective memory. Despite his being prime minister for seven years, the shadow of Thatcher (whose own appearance in a tank is much better known) and the glare of Blair have been hard to avoid.

When We Do Remember

When the Gulf War is remembered—and the British Legion has done its bit to jog the nation’s memory—it’s for the eponymous syndrome. A variety of symptoms (from fatigue, rashes, and memory loss to stress), have been claimed to have a variety of causes (including pesticides, oil fumes, even munitions used by Coalition forces themselves), but the most politically sensitive was self-administered: the drugs given to troops to protect them against Saddam’s feared use of nerve gas. Legal cases continue but the condition has proved too nebulous for satisfactory redress.

The Gulf War may also be remembered because of the Iraq War. The fact that coalition forces were stopped on the Basra Road— “the highway of death“—and did not go on to topple Saddam himself perplexed many. It recalled General Patton’s frustration in 1945 that the Allies stopped with the defeat of Germany, rather than carrying on to Moscow (a rare case of a general fighting the next, rather than then last, war).

For a number of geostrategic reasons, the Bush administration wanted to keep Saddam in power, a decision freighted with significance for those critical of American foreign policy in general—and of the “9/11 wars” in particular.

Such critics saw no coincidence that Desert Storm came immediately after the Cold War, fitting with Bush’s New World Order as the bipolar world had become unipolar, and as a means of allowing the United States to maintain its global hegemony after the fall of communism.

Coming as it did at a time of geopolitical, ideological, and technological transformation, the war lent itself to especially rich cultural representations—from the work of official war artist John Keane, to David O Russell’s “Three Kings,” Anthony Swofford’s “Jarhead,” and Andy McNab’s genre-spawning “Bravo Two Zero.” Most notoriously the “David Bowie of philosophy,” Jean Baudrillard, posited that the Gulf War did not actually take place.

And just as Vietnam was the first television war, the Gulf War was the first 24-hour news conflict. It could be watched in real time, adding an air almost of prurient entertainment that some were quick to recognize. Public interest in the war led to Britain’s first rolling news service: BBC Radio 4 News FM, a temporary affair but the template for both Radio 5 Live and the News Channel.

The Gulf War was a major global event which prompted questions about the nature of power and news, and furnished images that would become iconic. There’s no memorial in Britain, but it took 60 years for one to be built in recognition of Bomber Command, in whose campaign more men died than were even deployed in Granby. The Gulf War remains a war in which Britain played a role, but a war which has played less of a role in Britain.

Martin Farr is a senior lecturer in modern and contemporary British history at Newcastle University in the U.K. This article was originally published on The Conversation.