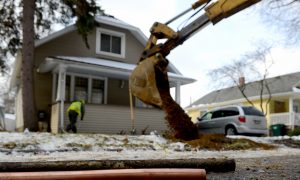 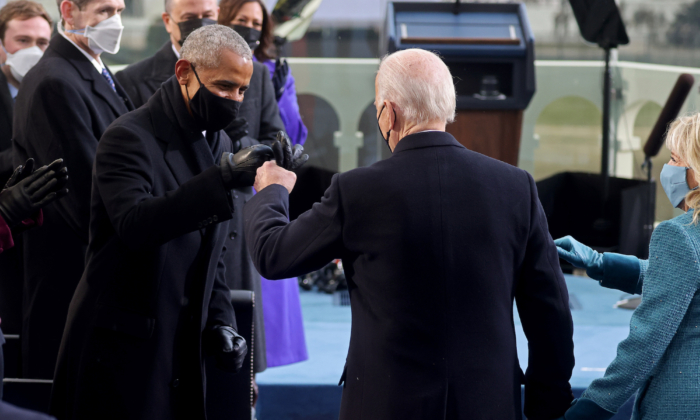 President-elect Joe Biden bumps fists with former President Barack Obama during Biden's inauguration as the 46th President of the United States on the West Front of the U.S. Capitol in Washington on Jan. 20, 2021. (Jonathan Ernst/Pool/Reuters)
Viewpoints

On Infrastructure, Biden Readies to Make the Same Mistake Obama Made

President Joe Biden likes to associate himself with Barack Obama and, in some ways, models himself on the still-popular former president. In many respects, Biden’s penchant for imitation might be a good thing. With this administration’s infrastructure effort, however, the imitation is unfortunate.

Obama’s 2009 infrastructure effort failed horribly. The economy experienced the slowest recovery on record, even as his infrastructure spending added considerably to the nation’s indebtedness. Now, Biden has loaded his own infrastructure initiative with the same flaws that destroyed Obama’s effort. The current legislation may yet fail to get through Congress, although if it does, Biden—if he genuinely wants to help the economy—should hope that whatever compromises become necessary will cleanse the bill of its Obama-like mistakes.

Otherwise, Biden’s effort will fail as completely as Obama’s did.

This issue turns on a well-established economic fact. The effects of government infrastructure spending have always depended heavily on business response. As the great economist John Maynard Keynes explained, when he first advanced the idea that such spending could help lift the economy out of the Great Depression of the 1930s, the economy benefits most when businesses see opportunities in what the government has done and follows on with its own spending on facilities and expansion. These follow-on “multiples,” as professional economists say, are the effects of the initial government spending and they ensure that the economy can maintain the facilities built by the government effort.

Without such an enthusiastic business response, the immediate economic boost quickly fades, leaving little lasting impact on growth or levels of prosperity.

Obama blamed the failure of his effort on the lack of the “shovel-ready” projects that The New York Times columnist Paul Krugman referenced continually when advocating for infrastructure spending. And Obama had some truth on his side. There were and are no such things as “shovel-ready” projects, at least not in modern America. The need for public hearings and zoning decisions, not to mention environmental considerations, hold up projects for months, sometimes years. However warranted such things may be, they helped scotch any immediate effect from Obama’s plan and would from the Biden plan should it pass Congress.

Perhaps immediate needs will offer some employment opportunities to bureaucrats, consultants, and lawyers, but not to guys with shovels.

But as much as this unfortunate reality impeded Obama’s success, the biggest problem facing the Obama effort was the president himself. He undermined his own program by actively discouraging the critical business follow-on spending. Even though the United States at the time had the highest corporate tax rate in the world, Obama threatened to raise those rates by continually complaining that corporate America failed to pay its “fair share.”

So instead of enjoying the expected follow-on support from private investment spending, the president’s rhetoric and the tax code encouraged businesses to do their expanding abroad, where tax rates were lower. They left their earnings overseas as well, because Washington only promised to tax them at a higher rate than foreign governments did. There was no follow-on spending, and the Obama effort faded quickly.

Now Biden seems determined to recreate the same impediments to success that Obama suffered. The White House has called for higher corporate taxes to “pay for” its infrastructure plans. Because President Donald Trump had lowered corporate tax rates, Biden seeks to raise them by a whopping one-third, to 28 percent from the current 21 percent. If that weren’t reason enough for companies to pass on any investment spending of their own as a follow-on to the federal effort, the president would also impose a 21 percent minimum tax on any company with a lot of deductions—the sort that arise from large capital spending projects.

Biden would effectively single out for special punishment any firm that might expand aggressively in a way that would multiply the favorable economic effects from federal spending. In addition, the general tax boost would again give U.S. businesses an inducement to do their expansion overseas. Nor would a business have any incentive to repatriate foreign earnings, because the White House has promised that it would tax that money at the higher American rate.

Not only would Biden’s plan miss any of the general economic boost—the multiplier—but the plan has an additional flaw. It includes nothing on what comes after the building. New roads and bridges need constant attention, as do recharging stations for electric cars and modernized homes and factories. Biden’s plan looks to corporate tax increases to pay for the initial building but offers nothing on how America will maintain all this. If the White House were to promise to return business to lower tax rates after a period of time, firms might then have the incentive and the wherewithal not only to maintain all these new things but also to expand on them.

But instead, the White House looks to keep the higher tax rates in place, presumably to finance some other grand project while the infrastructure built over the next few years suffers its inevitable depreciation.

If then Congress passes something like this plan, the nation will first see little, as it waits maybe a year or two for the paperwork that allows the shovels to arrive at the projects. America’s economy will then see an economic boost, perhaps just in time for the 2024 election, after which all will wind down, as Obama’s great infrastructure effort did. Unless your only focus is the next election, this is as poorly a structured deal as Barack Obama’s was.