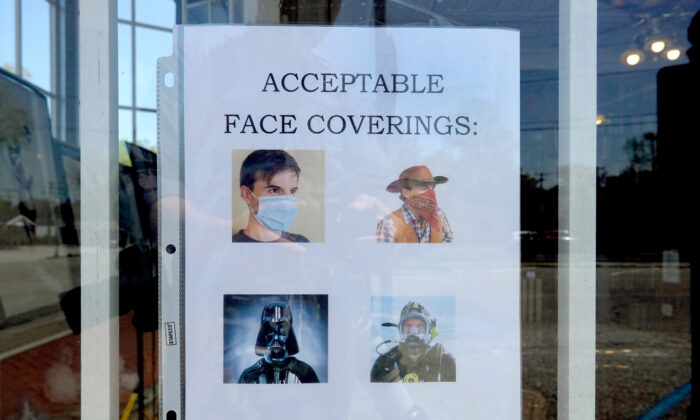 A sign in the window of the O'Gara and Wilson Antiquarian Booksellers bookstore asks customers entering the store to wear face masks in Chesterton, Ind., on May 13, 2020. (Scott Olson/Getty Images)
Viewpoints

On Illness, Regulation, and Freedom

A headline in the New York Times last Monday caught my eye. “Britain,” it said, “operating without adult supervision.”

This was an odd, and even sinister, way of putting it. No one believes that the government of Boris Johnson has covered itself in glory, by its response to the COVID-19 epidemic, to say the least, but to talk of adult supervision of a country implies a government that is in loco parentis of a population of minors.

The article under the headline then described the supposedly bad behavior of the population, for example by ignoring the need to wear masks or observing social distancing (a phrase no one used or even knew only a few months ago, in 2020 B.C., Before COVID).

And it is certainly true that, after the government lifted the restrictions, adolescents and young adults in Britain behaved as if nothing had happened. They congregated in crowds, they drank to excess, they partied. In short, they continued their normal life of tasteless and vulgar debauchery which makes them, in my estimation, among the least attractive of human demographic groups anywhere in the world.

Nevertheless, their perception of the risk to themselves of COVID-19 was quite accurate. At the height of the first wave of the epidemic, the risk of young adults dying of the disease was less than that of dying in road accidents, at least in times of normal traffic, and those very few who died were mostly suffering from other illnesses.

No one has ever suggested, as a consequence, that people of their age should not be allowed to use the roads. A fit 20-year-old, then, had virtually nothing to fear from COVID-19, even if he contracted it (though, by definition, the long-term consequences of infection are as yet unknown).

The argument against their insouciance, of course, is that no man is an island, not even a youngster who has little personal contact with the elderly. Their behavior would increase the spread of the virus to the vulnerable elderly.

During the height of the epidemic, 1 in 49 people aged more than 90 died of COVID-19, and in my own age group (I am now deemed vulnerable by virtue of my advanced years) 1 in 807.

Furthermore, it is argued that if the government had not taken drastic steps, the rates of death would have been higher. I believe this to be true, but that is not the end of the matter.

The economic costs of those drastic steps has been incalculable, and might last for generations, for the government borrowing they necessitated, or at least resulted in, was equal to that necessitated by the prosecution of a world war.

The question, then, is not whether the drastic steps were effective, but whether a similar effect could have been achieved at less social and economic cost.

There are at least two alternatives: legal restrictions targeted at the vulnerable, or leaving it to the vulnerable to decide for themselves what restrictions to impose on themselves (I have a close friend of my own age, for example, who is far more careful, sensible, neurotic or paranoid, than am I, even though I take what I consider reasonable precautions).

There are, of course, many people who are incapable of deciding for themselves, and with them some authority must stand in loco parentis.

The head of public health in England has objected to the targeting of the old and the especially vulnerable because he says that it would create a form of apartheid. This is surely to substitute sloganeering for thought.

Under a voluntary scheme people would choose the degree of risk that they were prepared to run, but even under compulsion the distinction between those at high and low risk, though to an extent arbitrary because risk rises exponentially with age and there is no natural cut-off point, is a reasonable one and not based merely upon prejudice.

The head of public health also objected to any scheme that targeted old people because he said it would not work, since old people could not avoid all contact with those younger than themselves, and that social isolation was a risk in itself.

This is certainly true, but irrelevant. To say that contact between young and old cannot be eliminated is not the same as saying that it cannot be significantly reduced. Like choices at elections, that of which policy to follow is not that between a perfect outcome and Armageddon, but between two imperfections. There will be regrettable consequences whatever we do, and people will die.

To complicate matters further, there are unpleasant trade-offs that must be considered. How much economic damage are we prepared to sustain to save the lives of ill eighty year-olds? There is no indubitably correct answer and so reasonable people could disagree.

With luck, these disturbing questions will be taken out of our hands. After all, the Spanish ’flu disappeared, albeit having killed 50,000,000 people first (the equivalent of 150,000,000 today), and has never came back; Covid-19 may do the same before it gets so far.

But past epidemics are not reliable or infallible guides to present ones, and so nothing is guaranteed to happen as it happened before. A complete cure or preventive vaccine may, or may not, be found. Anyone who says he knows these things for certain is either deluding himself or is a charlatan.

But to return to the article in the New York Times. Its headline seems to me indicative or symptomatic of a world outlook. It suggests that people behave badly because the government fails to direct them properly, as a good shepherd should. In other words, the newspaper implicitly dreams of a society so perfect that people will not have to be good, as T.S. Eliot put it. They will be good ex officio.

It could be, however, that the indiscipline of the population is a reaction to the constant badgering by regulation that it now experiences, often by authorities that are stupid and incompetent.

As Dostoyevsky reminds us, even were government to be wholly benevolent and all its provisions entirely for our benefit, we should not abide by them merely to assert our status as free and self-directed beings.

Theodore Dalrymple is a retired doctor. He is contributing editor of the City Journal of New York and the author of thirty books, including “Life at the Bottom.” His latest book is “Embargo and Other Stories.”