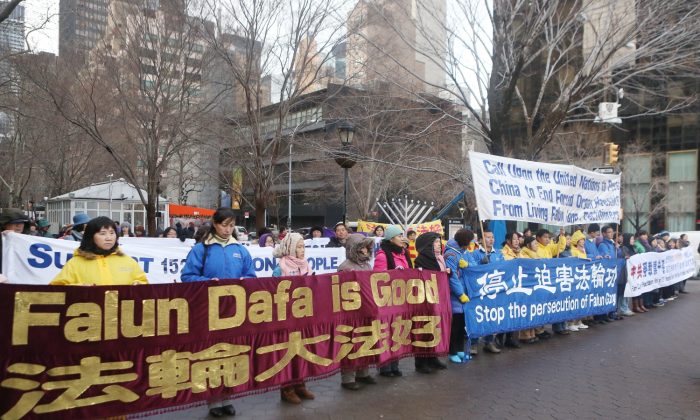 NEW YORK— Falling snow and freezing temperatures didn’t stop some Falun Gong practitioners from marking international Human Rights Day on Dec. 10 by gathering across from the United Nations headquarters on Dag Hammarskjold Plaza to call on the U.N. to stand up to China.

People stood in orderly rows, clasping banners that read, “Falun Gong is Good” and “Stop the Persecution of Falun Gong.”

The Falun Gong practitioners called on the U.N. to pressure China about its record on human rights, particularly the state-sanctioned harvesting of organs from living detainees.

Falun Gong is a traditional Chinese spiritual practice rooted in the principles of truthfulness, compassion, and tolerance.

Wang Zhiyuan with the World Organization to Investigate the Persecution of Falun Gong said at the rally that the group has collected evidence that top government and party officials, members of the judiciary, the military, the armed police, and medical institutions are all involved in orchestrating and continuing the harvesting of organs from living Falun Gong adherents and other targeted groups.

The group has collected evidence from the Chinese Communist Party’s Political and Legislative Affairs Committee, organ transplant hospitals, the armed police, autonomous regions, municipal governments, and local governments in 30 provinces. The evidence shows that the harvesting of organs is a systematic, highly orchestrated practice that was plotted directly by high-level leaders.

Wang Huilian, one of the speakers at the rally in Manhattan, almost became a victim of such organ theft. After she was detained in 2004, Chinese police sent Wang to the hospital five times for blood to be drawn. At that time she was thin and frail from a hunger strike. Perhaps doctors decided she was not a viable organ donor.

Before being rounded up by police in late 2000, Wang was a lecturer at Northeast Normal University in Changchun, China. After being tortured by freezing, hanging, and forced feeding, she wrote about the experience and published it online. After that the Jiangxi Province Police Bureau sent a team to lock Wang away in an undisclosed location. She was taken to a small room full of torture implements. She spent eight days and nights in that room enduring torture.

After escaping to Thailand in 2007, Wang was granted asylum and came to the United States in 2011.

“Some of my colleagues, my friends, are still being illegally detained. I am very worried about them,” Wang said. “At any moment they could have their organs taken or be persecuted to death.”