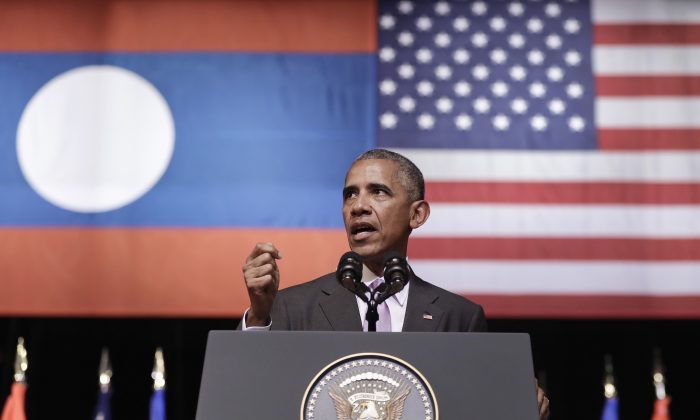 VIENTIANE, Laos—Acknowledging the scars of a secret war, President Barack Obama on Tuesday said the United States has a “moral obligation” to help this isolated Southeast Asian nation heal and vowed to reinvigorate relations with a country with rising strategic importance to the U.S.

Making the first visit for a sitting U.S. president, Obama said too few Americans know of the United States’ covert bombing of Laos during the Vietnam War. He offered no apologies, calling the campaign and its aftermath reminders that “whatever the cause, whatever our intentions, war inflicts a terrible toll.”

“Given our history here, I believe that the United States has a moral obligation to help Laos heal,” Obama said, as he addressed an audience of more than 1,000 students, business people and officials.

For nine years, the U.S. conducted a punishing, covert bombing campaign on landlocked Laos in an effort to cut off communist forces in neighboring Vietnam. The bombardment dropped more than 2 million tons of ordnance on the small nation, more than “we dropped on Germany and Japan, combined, in all of World War II,” Obama said.

The bombing left behind deep scars, millions of unexploded cluster bombs across the countryside and decades-worth of cleanup.

Obama is one of several world leaders arriving for a meeting of the Association of Southeast Asian Nations. Taking its turn as the chair of the regional forum, the Laos’ communist government is seizing a rare moment in the spotlight.

For Obama, the visit serves as a capstone to his yearslong effort to bolster relations with Southeast Asian countries long overlooked by the United States. The outreach is a core element of Obama’s attempt to shift U.S. diplomatic and military resources away from the Middle East and into Asia in order to counter China’s dominance in the region and ensure a foothold in growing markets.

Obama’s project—dubbed his Asia pivot—has yielded uneven results, as conflict in the Middle East has continued to demand attention and China has bristled at what it views as meddling in its backyard.

Obama said America’s interest in the Asia-Pacific isn’t new and is not a passing fad.

“The United States is more deeply engaged across the Asia-Pacific than we have been in decades,” Obama said. “Our positon is stronger and we’ve sent a clear message that as a Pacific nation, we are here to stay.”

With just four months left in office and eying his legacy, Obama used the moment to reassert his aims. He touted new military aid and U.S. support for regional cooperation in addressing maritime disputes. He made a plug for the massive Trans-Pacific Partnership free trade agreement, the policy’s central economic component that is now stuck in Congress. He sought to address worries that United States’ new focus on Asia will leave smaller nations as pawns in a chess match between the U.S. and China.

As a first sign of a new relationship with Laos, Obama said his administration would address the legacy of war. Obama announced he would double spending for unexploded ordnance, committing $90 million over the three years. The U.S. has contributed $100 million to the effort in the last 20 years, as annual deaths have fallen from more than 300 to fewer than 50, the White House said.

The Lao government said it would increase efforts to recover remains and account for Americans missing since the Vietnam War.

As he opened a day of ceremony and diplomacy, Obama was greeted by a military band, traditional dancers and a warm, tropical rain. He met with Lao President Bounnhang Vorachit, was feted at a welcome banqueted, where he toasted to a relationship he said would “mean greater progress and opportunity for the people of Laos.”

Obama’s outreach to those regional powers hit a snag just as he arrived in the region from China. The White House called off a planned meeting Tuesday with Philippine President Rodrigo Duterte, after the brash new leader referred to Obama as a “son of a [expletive].”

Duterte, who had been expecting Obama to criticize his deadly, extrajudicial crackdown on drug dealers, later said he regretted the personal attack on the president.

In a statement read out Tuesday by his spokesman, Duterte said his “strong comments” to certain questions by a reporter “elicited concern and distress.”

“We look forward to ironing out differences arising out of national priorities and perceptions, and working in mutually responsible ways for both countries,” the statement said.