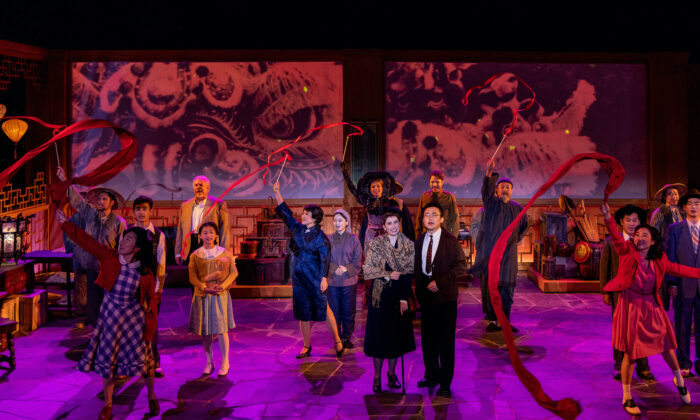 A scene from the Los Angeles Opera’s performance of “On Gold Mountain.” (Courtesy of Taso Papadakis)
Timeless Principles

‘On Gold Mountain:’ A New Opera in a Unique Performance

Opera is a very Western art form. Born in Italy in the 1500s, it would flourish in the royal courts and palatial theaters of Western Europe for the next few centuries. In the 20th century, some of the foremost opera companies in the world grew out of the United States, which continued European traditions with both foreign and domestic singers. Today, the love of classical singing has spread across the globe.

Unfortunately, in recent decades, opera has felt the need to “update” the classic operas to attract young audiences, who they don’t think will enjoy centuries-old settings and traditions. This is a tragically destructive trend, which is robbing confirmed as well as potential young opera fans of the chance to embrace these masterful compositions in their original forms. The main reason for these changes is the goal to draw audiences with something new and fresh, plus the desire of companies, producers, and directors to create something unique.

This is why I was thrilled when I learned about the Los Angeles Opera’s performance of a contemporary opera, “On Gold Mountain.” As part of its 2021/2022 season, the opera company mounted this production as an entry in its LA Opera Connects series in May. Instead of the Dorothy Chandler Pavilion or some other traditional theater in Los Angeles, this opera was performed in the unique setting of a makeshift outdoor stage in the Huntington Library Gardens in San Marino, California. Adapted from a true story, this composition by Emmy-winning composer Nathan Wang and bestselling author Lisa See was a loving tribute to Chinese American history in California and an entertaining blend of Western and Eastern music.

The libretto to “On Gold Mountain” was written by Lisa See, who based it on her own memoirs of the same name. This authoress, who is one-eighth Chinese, based the story on her own family’s history and experiences coming to the United States three generations ago. Published in 1995, the book inspired an exhibit at the Smithsonian Institution in 2001, as well as this opera. It is also a valuable look into the experiences of the countless Chinese immigrants who came to California in the 19th century in search of “Gold Mountain.” Some artifacts from Miss See’s ancestors are on display at the Huntington Library, adding to the appropriateness of the venue.

This story is relatable to composer Nathan Wang, since his own parents immigrated from Shanghai, China to Los Angeles, where he was born. A prodigious pianist as a young child, Mr. Wang grew up to become one of the most successful classical composers of the late 20th and early 21st centuries. He has worked extensively in the Hollywood and Asian film industries, writing and conducting scores for films, television shows, and video games for the likes of Steven Spielberg. He also has written extensively for the concert and opera stages. LA Opera has commissioned him to write four original operas for their performance. The first of these was “On Gold Mountain,” which their project Voices of California commissioned and performed in 2000 as their first production.

This opera tells the story of Fong See, a Chinese boy who goes to the United States in search of his father, who has sent neither money nor news to his family since leaving for California in search of fortune. The lad bids his beloved mother and child bride farewell, vowing to find his father and make his fortune before returning. In America, Fong finds his father, a penniless gambler, whom he persuades to return to China. The promised land of opportunity challenges the courageous lad with prejudice right and left, yet he works hard at countless odd jobs to earn enough money to open his own store. He meets a lovely young American woman, Ticie Pruett, whose vision helps him expand his business. They quickly fall in love and decide to get married, despite current discrimination and miscegenation laws in Los Angeles. Against all odds, they raise a family of four children, and Fong See becomes the wealthiest merchant in Chinatown. However, everything changes when he decides to return to China and re-embrace the old country’s ancient traditions.

In a Chinese Garden

This performance of “On Gold Mountain” was a collaboration between LA Opera Connects and the Huntington Library, Art Museum, and Botanical Gardens. In addition to LA Opera’s Orchestra, musicians were recruited from the community, including many schools and young orchestras in the area. The large chorus included singers from Voice of Love Chorus Los Angeles and LA Opera’s Opera Camp, as well as people of all ages from the community. The music blends Oriental sounds, provided by Asian instruments, with classical Western music.

This opera’s eight performances, presented over two weekends, took place in the Huntington Library’s Liu Fang Yuan, the Garden of Flowing Fragrance. The performances were extremely popular, with the second weekend completely selling out days in advance. Museum donors and opera fans alike were eager to experience this exclusive experience. Exploring the gorgeous Botanical Gardens in the late afternoon was a rare opportunity, since the lush grounds customarily close hours before sunset. Walking past beautiful Asian landscaping and Chinese architecture, including ornate pagodas, felt like journeying to another land for this unique experience.

The actual performance took place in an elevated courtyard in the gardens, where bleachers were set up for the audience. The set was minimalist, comprised mainly of tall wood and screen panels, which served both as a backdrop and a shield between the audience and the backstage area. In addition to a few simple props and set pieces, which the singers often moved on and off during the show, the visual experience was enhanced by historic photographs of the See family, which were projected on the panels. Subtitles in English and Chinese also projected on the backdrop made the performance enjoyable and relatable to everyone in the audience, which included many Chinese Americans. The balmy Southern California afternoon turned into a mild evening as the moon rose above the opera.

Attending “On Gold Mountain” was an amazing experience. After the show, the artists stood in the courtyard where they had sung, and the audience was able to walk right up to them to chat, express their appreciation, and take pictures. This was just the final moment of an intimate soiree. Although I have no Asian heritage in my background, I felt like I was part of the story which the opera brought to life in this picturesque setting. The music suited the story and purpose of this work very nicely, being memorable, emotional, and appropriately Asian, yet neither too classical nor too contemporary. The musical number which grabbed me the most was the trio between the three wives, each expressing her personal tale of sorrow. The only number I didn’t like was the Matchmaker’s solo. Although very well performed, I found the lyrics inappropriate, with the salacious meanings accented by suggestive choreography and gestures. This was an unnecessary addition to an otherwise family-friendly work.

The overall production value was very high. Every singer was excellent, both in terms of singing and acting. The costumes and sets were effective, and the staging made good use of the reduced cast. By utilizing the natural setting, the performance was more effective than it could have been in an indoor theater, no matter how elaborate the scenery. My one criticism of the production was the caliber of the dancing. When the lead couple waltzed and when Fong See’s children did the jitterbug, the singers weren’t really ballroom dancing; they were basically just stepping back and forth. Singers’ terpsichorean abilities are often underestimated, which is a shame, since I’m sure these singers could have danced much better if they were given more instruction.

When I talked to Nathan Wang after the performance, he said that there is talk of “On Gold Mountain” being performed in conjunction with the 2028 Summer Olympics in Los Angeles. I look forward to seeing what future productions LA Opera brings to the community through its LA Opera Connects program. Let’s hope that more opera companies will tackle more contemporary operas which honor history and the traditions of opera while bringing something new and exciting to artists and the community. In the meantime, if you have a chance to see an opera written by Nathan Wang, I highly recommend you take it. “On Gold Mountain” is a loving tribute to Chinese traditions, plus the spirit of Americanism.