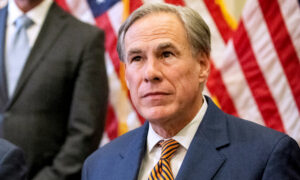 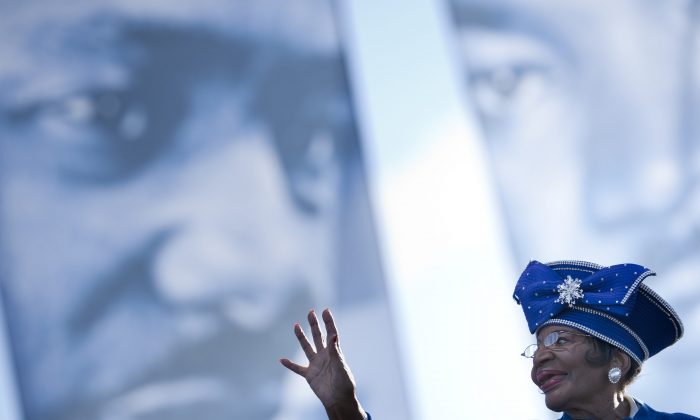 Dr. Christine King Farris, sister of Martin Luther King Jr., waves after speaking at a dedication ceremony at the Martin Luther King Memorial on the National Mall in Washington, D.C., in this file photo. Though the “ground crew” of the civil rights movement made sacrifices that changed society, there is still work to do, says Dr. Farris. (Brendan Smialowski/Getty Images)
US

ATLANTA—Movement songs and a call for jobs and justice rang out inside the Martin Luther King community center gym in downtown Atlanta on Aug. 17. A pair of burly men helped Dr. Christine King Farris, Martin Luther King’s only living sibling, onto and off of the stage.

Though she seemed slightly stooped and frail, her voice was strong and clear.

“Mark this day well. You are now a part of history,” she said. “You can tell your grandchildren you were here for the 50th anniversary, in the community where we first communicated the dream.” She was speaking of the “I Have a Dream” speech her brother gave in Washington in 1963. The King Center held a commemoration before the Aug. 28 anniversary in order not to conflict with events in Washington.

King grew up two blocks from the gym. He and his wife are buried across the street from it.

Though the “ground crew” of the civil rights movement made sacrifices that changed society, there is still work to do, according to Farris. She said violence and injustice are still pervasive.

She said the tragic death of Trayvon Martin, new voter laws enacted in North Carolina, and “the decision of the Supreme Court crippling the Voting Rights Act,” show that a multiracial civil rights coalition is urgently needed.

According to Farris, “The slogan of the 1963 march, ‘jobs and freedom,’ is still very relevant.”

The hundreds of people at the expo appeared to be the multiracial coalition she was describing. Amnesty International, the human rights advocacy group, was there, as well as multiple universities including King’s alma mater, Morehouse. Government agencies, political groups, health organizations, public library, religious, and arts groups were represented.

A group from India offered copies of the hymn “We Shall Overcome,” in English and Hindi. At King’s annual birthday celebrations at the King Center, that song is traditionally sung in multiple languages.

A tall Chinese man wearing a suit collected signatures for a petition in favor of House Resolution 281, which condemns organ harvesting from Falun Gong practitioners in China. Rep. John Lewis, who represents the 5th District where the King Center is, has signed on as a co-sponsor.

Georgia Rep. Tyrone Brooks arrived quietly, alone, and wearing a baseball cap. He did nothing to draw attention, but soon people were approaching him to shake hands and to take pictures. He, too, is a lifelong civil rights leader, and remembers King and all his fellow activists.

Brooks was a child when Hosea Williams recruited him. “Hosea Williams was my supervisor. He was recruiting young people to join King. He brought me into the SCLC (The Southern Christian Leadership Conference, King’s organization),” he said.

Brooks was indicted on fraud and tax charges in May. He is accused of misappropriating funds from a nonprofit he founded and from the Georgia Association of Black Elected Officials (GABEO).

He pleaded not guilty. Former Gov. Roy Barnes will defend him, and a state commission decided he should stay in office. According to Brooks, he is being falsely targeted for his efforts to draw attention to a 1946 lynching at Moore’s Ford Bridge in rural Georgia.

The Georgia Legislative Black Caucus issued a statement calling for support for Brooks: “Rep. Brooks is a distinguished veteran of the struggle for civil rights in Georgia. These allegations cannot erase his record of service and sacrifice. … Representative Brooks, his family, and his constituents need our support at this time. He is our friend and a respected public official and we stand alongside of him.”

Naomi King, widow of King’s brother A.D. King, added a bittersweet note when she recalled baking and delivering a still-warm sweet potato pie for him while he recuperated at home after being stabbed in a 1958 assassination attempt.

She asked him how he was, and he replied, “I’m just great ‘cause I’m eating your sweet potato pie.”