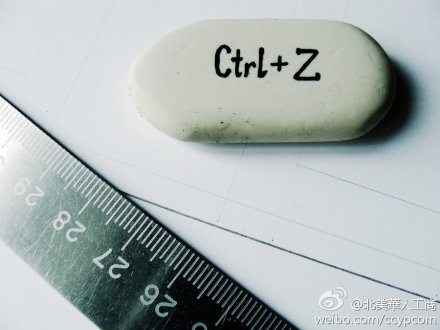 A photo of a ruler and an eraser that has "Ctrl Z" written on it. July 12 is "Ctrl Z Day," a day for people to post what they would change in their lives if they could press the two computer keys “Control” (or “Command” for Mac users) and “Z” and undo anything. (Sina Weibo)
China

On ‘Control-Z Day,’ Chinese Netizens Post What They Would Undo in Life

Netizens on Sina Weibo, China’s Twitter-like platform, have designated July 12 as “Ctrl Z Day,” a day for people to post what they would change in their lives if they could press the two computer keys “Control” (or “Command” for Mac users) and “Z” and undo anything.

Netizens took “Ctrl Z Day” as an opportunity to reflect on their lives, with many expressing regret over things that could have been.

A netizen from Jiangsu Province wrote, “I would use Ctrl Z on June 27, 2005, the day my grandma passed away. I was in junior high and stupidly obeyed my parents who told me to continue studying for my final exam instead of going to see my grandma for one last time.”

Caijing, a relatively independent financial and economic magazine, linked an article by the Huffington Post that lists the top five regrets of the terminally ill, with the most popular being “I wish I’d had the courage to live a life true to myself, not the life others expected of me” and the second most common, “I wish I didn’t work so hard.”

A netizen from Henan Province denied the possibility of getting a “do-over,” writing, “There’s no Ctrl Z Day in life; only yesterday that you can’t return to, and tomorrow that you can’t resist.”

A well-known blogger writing under the pseudonym Liu Ji Shou expressed similar sentiments, writing, “While typing on a computer, you can type Ctrl Z to undo your mistakes. But in life, where there’s no Ctrl Z, a sentence spoken without consideration may break someone’s heart, and all the effort you had put into the relationship would be wasted.”

Some netizens expressed regrets in romance. A netizen from Guangxi Province said, “When I was in [Shandong’s] Qingdao International Airport, I should have given him one last bear hug before I left.”

Other netizens made wry references to incidents related to the communist regime.

A Hubei Province netizen wrote, “If I could Ctrl Z, I’d want to reincarnate as Li Gang’s kid,” mocking how a son of the high-ranking communist official had shouted, “Go ahead, sue me if you dare! My dad is Li Gang!” after drunk driving and running over two university students, one of whom later died.

Liu’s post referred to the slew of anti-Apple comments made by many Chinese celebrities that were all posted online at around 8:20 p.m. in support of the regime’s consumer report that blasted Apple for supposedly discriminating against Chinese consumers.

One of the comments had “Publish at around 8:20.” at the end, leading netizens to notice how the times on the celebrities’ posts coincided and to suspect the regime had sent the comments to celebrities to post at a schedule time.

A few netizens joked about other keyboard shortcuts.

“What if we could use Shift Del in real life?” commented a Guangdong Province netizen, referring to the keys “Shift” and “Delete” which permanently deletes files in folders when pressed together.

I regret “pressing Ctrl S before Ctrl Z,” said a Beijing netizen, meaning that he saved his work with “Control” and “Save” which stopped “Ctrl Z” from working.

Translation and research by Ariel Tian.