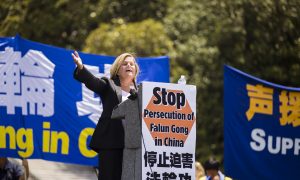 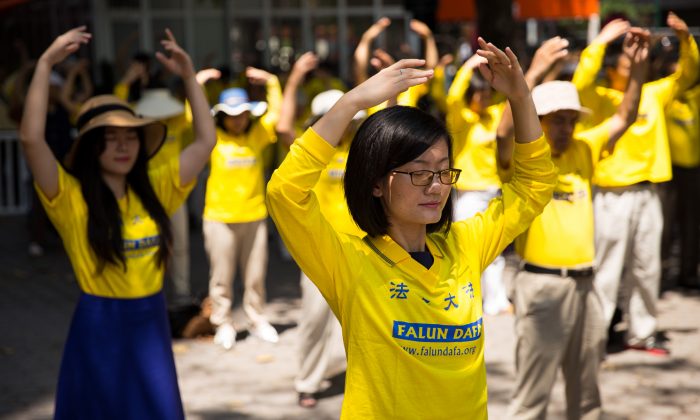 On Anniversary of Persecution, Chinese Women Tell of a Narrow Escape

NEW YORK—Li Qiong sensed something was not quite right when she got home late from work on April 2.

About a dozen security personnel—some regular police, some in plainclothes, and some wearing badges that read “610 Office”—had stopped by earlier for a “routine inspection,” her daughter-in-law said.

Given that Li is a practitioner of Falun Gong, a traditional spiritual practice that has been persecuted in China since 1999, she was used to attention from the authorities—including from the 610 Office, the Party’s Gestapo-like secret police force tasked with carrying out the Falun Gong suppression. But a dozen people was much more than usual. She decided it was best not to return home. Ever.

Her home was raided about a week later as Party security officials came to make an arrest, but she had already left. In May, Li fled to the United States.

Given that Li is a practitioner of Falun Gong, a traditional spiritual practice that has been persecuted in China since 1999, she was used to attention from the authorities

Li Qiong told the story as she joined about 200 other Falun Gong practitioners at Dag Hammarskjold Plaza across from the U.N. headquarters in New York City in a rally to mark the 16th anniversary of the start of the brutal campaign waged by the Communist Party against the practice.

After so many years of persecution, the years felt like they were running into each other for practitioners of Falun Gong, who once numbered between 70 million and 100 million in the late 1990s in China, just before the campaign to eliminate their practice began.

But 2015 differs in a crucial way, given that the Falun Gong community has over the last couple of months embarked on a bold attempt to bring to justice Jiang Zemin, the Communist Party leader who declared their faith a threat to the ideological foundations of communist rule.

At least 80,000 criminal complaints have now been lodged against Jiang, using the Communist Party’s own channels for redress—the public prosecutor’s office, and the court system.

Li Qiong lodged her complaint on June 29. “As a Chinese citizen, I should have freedom of belief. I have the right to sue Jiang and express the injustice of how he tortured tens of thousands of families, physically and mentally,” she said.

But 2015 differs in a crucial way, given that the Falun Gong community has over the last couple of months embarked on a bold attempt to bring to justice Jiang Zemin

Whether the current leadership will act on the complaints is another matter entirely—but observers have found it remarkable that the mere act of filing a criminal complaint has not led to further persecution, as it did in years past.

“I am not going to guess what Xi Jinping will do. I have no hope for Xi Jinping to redress the persecution of Falun Gong,” she said. “How will he deal with these millions of people and give us a legitimate answer? They use the law to maintain order. We’ll use the law, too.”

According to Minghui, a website, which collects firsthand reports of persecution from China, over 3,800 practitioners have been persecuted to death since the beginning of the persecution, and millions sent to prison or labor camps. Researchers have presented credible evidence indicating that tens of thousands of Falun Gong practitioners have had their organs harvested for paying recipients while they were still alive.

The intensity of the persecution has changed over the years. For example, from 2000 to 2008, Li was in and out of prison, and lost her job at a local agricultural work unit where she handled finances.

Then, until the recent police attempt to kidnap her, local security staff came to an unspoken truce with Li. Only four officials—a neighborhood committee staff, a local police officer, a stability maintenance officer, and a “610 Office” officer—would check on her during Chinese holidays and near the anniversaries of events the Party considered “sensitive,” such as the June 4 Tiananmen Square Massacre or Falun Gong’s April 25 mass petition near Commmunist Party headquarters in Beijing.

This is why Li was suspicious when a dozen security officials—rather than the usual low-key four—turned up.

Yu Kun, 50, another attendee at the rally and a recent arrival from China, also found that the persecution against her was not as harsh as in the early years. But the extreme brutality she experienced at the start of the campaign more than enough made up for it. She said she was tortured, and believes that she nearly ended up a victim of state-organized organ harvesting.

Although Yu only started practicing Falun Gong in 1999, not long before it became the subject of an overwhelming propaganda barrage, she said she was so moved by its moral teachings and health benefits that she still wanted to speak up for it. She traveled to Beijing to protest, from her native city of Wuhan, in central China, and has handed out countless fliers in her hometown addressing the persecution.

Local police first harassed and finally detained Yu in April 2001. She was in and out of prison between 2004 and 2009.

During her third jail term, police locked her up in a small, dark room and prevented her from sleeping for 20 days. She was made to sit on a tiny square plastic stool at night, causing painful sores to appear on her buttocks. Prison guards then locked her up with drug addicts, who were encouraged to bully her. They would hit her and dump ice water down her back, she said. “They didn’t treat us like humans.”

On one occasion, several people holding medical equipment visited the prison and announced that they were going to take blood samples from the prisoners.

Yu, who had read reports about the organ harvesting allegations, refused to let them draw her blood.

“When they called my name, I said I practice Falun Gong and don’t have any illnesses,” she said. “One person came up to me and called me several times, but I refused to obey.” The mysterious group, dressed in suits, later left her alone.

Yu left Wuhan this year with her daughter, who is almost 20, and made her way to the United States. She now goes to the United Nations everyday to clarify the truth about Falun Gong.