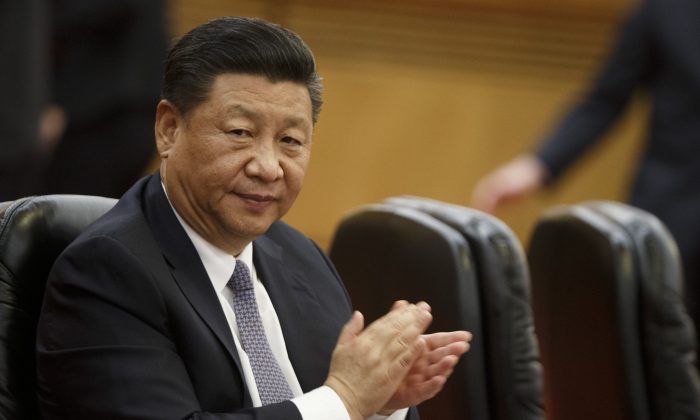 Four decades after China first introduced ‘opening up’ economic policies, the Communist Party’s control of the economy remains as aggressive as ever.

In 1978, then-leader Deng Xiaoping ushered in capitalist market forces and allowed foreign investment into the country. Today, China is the world’s second-largest economy.

Current Chinese leader Xi Jinping’s 40th-anniversary speech on Dec. 18 is further evidence that Beijing has no intention of initiating true reforms to liberalize its economy. In an almost 90-minute speech, Xi outlined “successes” achieved under the Chinese Communist Party’s leadership, and emphasized the need to “remain unmoved in upholding Marxism’s guidance.”

“We must persist in having the party lead all work, and constantly strengthen and improve the party’s leadership,” he told a gathering of party members at the Great Hall of the People in Beijing.

There was no mention of concrete policies to open up markets or to respond to recent criticisms from the United States and other Western nations that China had engaged in intellectual-property theft and unfair trade practices that prop up domestic sectors to the disadvantage of Western competitors.

Instead, Xi made a subtle swipe at those who wish for China to change its ways.

“What to change, how to change must be fundamentally judged by whether it can refine and develop the ‘socialism with Chinese characteristics’ system,” Xi said. “What we should and can change, we will absolutely change. What should not or cannot be changed, we will absolutely not change.”

At another point in the speech, Xi claimed that China’s long history and 1.3 billion population means the country must forge its own unique path, “and cannot accept teacherly types who boss the Chinese people around.”

There were no explicit mentions of the United States, but to anyone following Chinese state media coverage of the ongoing trade row between the two countries,  the refrain will sound very similar. As an Oct. Global Times editorial said, “China will only change at its own pace and not at the pace dictated by others. The attempts by some U.S. politicians to employ pressure to coerce Beijing to revise its economic policies will almost certainly fail.”

Xi also made it clear that China intends to continue pursuing its ambitions to achieve technological dominance, in a section stressing the importance of innovation to further economic development. “We must accelerate the innovation of key core technology for our autonomy,” he said, echoing comments earlier this year calling for technology self-reliance. In the wake of the U.S. administration’s export ban on Chinese telecom firm ZTE, which crippled the company’s operations, Xi urged the domestic tech sector to develop its own advanced chips and cut dependence on foreign imports.

Investors weren’t excited about Xi’s speech. The Hong Kong, Shenzhen, and Shanghai stock exchanges all fell by the end of trading, by 1.05 percent, 0.81 percent, and 0.82 percent, respectively.

At a time when China’s private sector is already nervous about recent trends of more state control and Beijing favoring state-owned firms, Xi’s speech did little to quell concerns that China’s economy was moving in the opposite direction of liberalization.

Some government officials and economists have hoped that U.S. trade pressures would spur Beijing into embracing more market-oriented reforms.

But some China observers believe the timing for true reform has long passed. “China is only opening up its markets for the purpose of making money,” Feng Zhongyi, a China studies professor at the University of Technology Sydney, told the Chinese-language Epoch Times.  “Now that China’s economy is in a downturn and the Chinese regime is running out of money, it is bringing up reform again.”

Guangdong Province, one of the country’s main trading hubs, has stopped releasing a regional purchasing managers’ index (PMI) for its manufacturing sector, after the National Bureau of Statistics notified Guangdong authorities that all PMI data will now be conducted only by the national bureau. Guangdong has stopped compiling data since Nov. 1.

In August, the Guangdong manufacturing PMI dropped below 50 for the first time since March 2016. Data hinted at hard times ahead.

China’s customs authorities have stopped releasing export data since April, according to a Radio Free Asia report. The first set of U.S. tariffs—and China’s retaliatory tariffs—went into effect in July.

Luo Ya and Zhou Huixin contributed to this report.