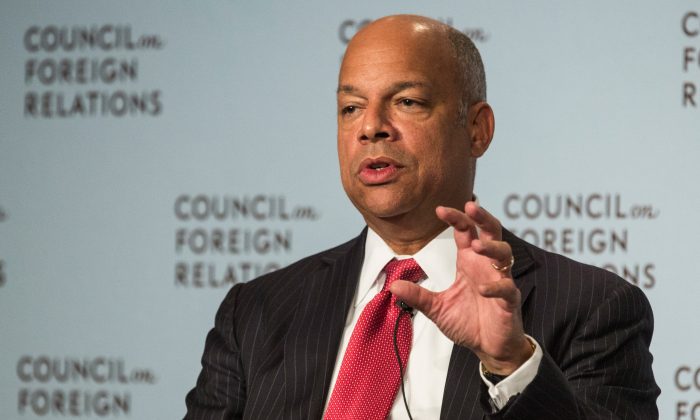 Department of Homeland Security Secretary Jeh Johnson answers questions after speaking at the Council on Foreign Relations on September 10, 2014 in New York City. Johnson spoke primarily about the threat of ISIS, or the Islamic State, as well as foreign fighters traveling to Syria to fight and the new threats faced by ISIS. (Andrew Burton/Getty Images)
US

NEW YORK—Thirteen years after the 9/11 attacks, threats to the U.S. are more complex and less centralized.

Tasked with preventing another attack, the Department of Homeland Security (DHS) has stepped up efforts at foreign airports to catch would-be terrorists.

Speaking Wednesday at the Council on Foreign Relations, Department of Homeland Security secretary Jeh Johnson said the U.S. is ramping up security on multiple fronts. One long term effort is to expand overseas pre-clearance facilities at airports with flights to the U.S. At these facilities Customs and Border Protection vet those traveling to the U.S. before they depart.

Some 12,000 foreign fighters are believed to have travelled to the region to join in fighting in Syria and with the Islamic State. The U.S. estimates about 1,000 of those are from Europe and about 100 are from the U.S.

Johnson said the U.S. is working closely and sharing information with European nations and other visa waiver program participant nations to keep track of those traveling to Syria and Iraq.


This summer the U.S. tightened airport security at facilities abroad. Within the the U.S. Johnson asked Americans for their understanding.

“We ask the American public to understand in these times the continued need for a certain level homeland security in their lives, to understand the vital role our intelligence collection agencies play in keeping the homeland safe,” said Johnson.

The secretary also expressed his concern about homegrown terrorists, such a those responsible for the Boston Bombing. He said DHS is also communicating with retailers to be on the alert for those buying suspicious quantities of possible bomb components.

Secretary Johnson added that concerns about security must be tempered by our belief in liberty and privacy.

“In the name of national security I can build you a perfectly safe city, but it will be a prison;
it will cost us who we are as a nation of people who respect the law, cherish privacy, freedom, and fairplay, celebrate our diversity, and who are not afraid.”