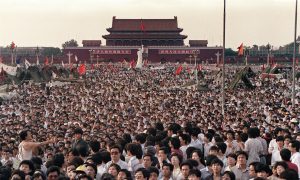 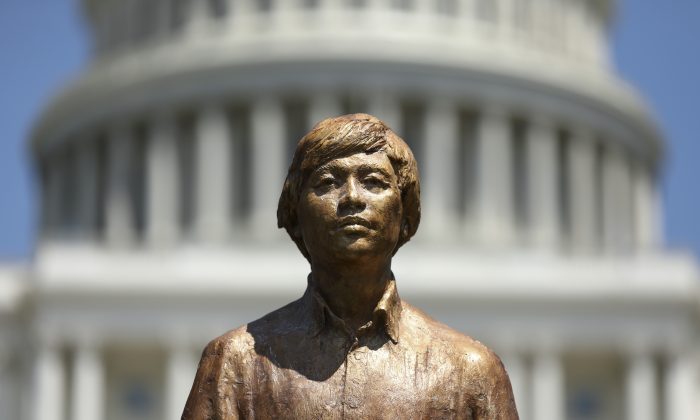 A close-up of the Tank Man statue that was unveiled in a rally to commemorate the 30th anniversary of the Tiananmen Square massacre, on the West Lawn the Capitol on June 4, 2019. (Samira Bouaou/The Epoch Times)
China Human Rights

WASHINGTON—“Seeing the stories about victims and families made me feel so bad, because I imagine that in the outside world there must be all sorts of commemorative events to mark the 30th anniversary of June 4th. But inside China, it is like a stagnant pool. We are being monitored.” So said a letter from a member of the Tiananmen Mothers, which was read by Mi Ling Tsui, the communications director of the NGO Human Rights in China.

This was at a public rally hosted by the Victims of Communism Memorial Foundation (VOC)  on the afternoon of June 4, 2019, on the West Lawn of the U.S. Capitol. More than two dozen prominent human rights organizations commemorated the 30th anniversary of the Tiananmen Square Massacre and highlighted the continued oppression of the Chinese people by the Chinese Communist Party.

Tiananmen Mothers is a group of victims’ families who suffered the loss of their young sons or daughters, when the Chinese communist regime’s military cracked down on the civilian and student protests in and around Beijing Tiananmen Square on the evening of June 3 and the morning of June 4 in 1989.

For 30 years, this group has persistently sought justice, accountability, and compensation for their loss, despite consistent regime harassment to silence them. The group has only 127 members left now—55 of them have already passed away. At the rally, an exhibit of the Tiananmen Mothers portraits was featured in front of the speaker’s podium. (Photo)

Tsui, fortunately, obtained the letter from one of the Tiananmen Mothers who knew how to send emails via bypassing the firewall. The letter was ended with a more hopeful message: “I heard that more than 100 people are being forced to leave Beijing. You can see from this, how the government is afraid of the power among civil society to lift the lid of the case of June 4th massacre.”

Smith also praised the persistent courage for the Tiananmen Mothers to “continue the fight for freedom that their sons and daughter started… Refuse to forget, refuse to back down.

“They have inspired a new generation of leaders of freedom fighters, across China, Hong Kong, and the world.”

The commemorations for the 30th anniversary of the Tiananmen Square massacre took place in many cities worldwide since last weekend and peaked on June 4. The largest memorial gathering happened in Hong Kong, the only place in China where such commemorations can be safely held. The organizers claimed that more than 180,000 people attended the candlelight vigil and turned it into a breath-taking spectacle.

In Washington, there were multiple events related to the Tiananmen Massacre commemoration on the same day of June 4. On the morning, the Congressional-Executive Commission on China (CECC) held a public hearing on the theme of “Tiananmen 30: Examining the Evolution of Repression in China”.  In addition, the Wei Jingsheng Foundation, the European Parliament office in Washington DC, Dialogue China, and other human rights groups also held a photo and art exhibition at the House Rayburn building on the afternoon of June 4. The public rally at Capitol Hill had the largest public participation and media engagement.

Rep. Andy Levin (D-Mi) is a member of the House Foreign Affairs Committee’s Subcommittee on Asia, the Pacific and Nonproliferation. Levin attended this rally and shared his unique connection with the pro-democracy movement. He had the chance to participate in the large scale democracy demonstrations in Hong Kong in late May 2019, when people demanded democracy for China.

And he was in Chengdu City as a foreign graduate student in early June 1989. He witnessed the two-day crackdown of pro-democratic movements in the center of Chengdu, seeing many people being beaten on the streets, and then thrown on the back of trucks, never to be seen again. He pointed out that a huge mistake is still being made 30 years later when the situation was called just “Tiananmen Square” massacre when it was actually “a systemic national crackdown against democracy by the Chinese government.”

Rep. Jim McGovern (D-Mass.) is the co-chair of Tom Lantos Human Rights Commission and chair of the Congressional-Executive Commission on China. He stated at the Rally: “We know that the spirit of Tiananmen is still alive and well. China’s leaders demonstrate their fear every day with their security cameras, censorship, detention centers, and obsession of preventing Chinese people from knowing the truth…Think about the time, energy and resources that the Chinese government is spending in this denial even now, 30 years after the fact. That is the power, the power of ideas, the power of people coming together, the power of people remembering the truth.”

McGovern sponsored House Resolution 393, which is for “remembering the victims of the violent suppression of democracy protests in Tiananmen Square and elsewhere in China on June 3 and 4, 1989 and calling on the Government of the People’s Republic of China to respect the universally recognized human rights of all people living in China and around the World.”

This resolution was brought to House debate at noon of June 4, then passed (Y 423 vs N 0) at the end of the day. The unanimous passage of this resolution highlighted that the United States stands with the victims and their families of the Tiananmen Massacre. Just as Speaker Pelosi and Rep. Chris Smith stated: “The U.S. is on the side with the Tank Man, not the person who ordered the tanks to roll over people.”

The resolution called for the Chinese government to “allow Tiananmen demonstration participants who escaped to or are living in exile in the United States and other countries to return to China without risk of repercussions or retribution.” It also called for the Chinese government to “cease the censoring of information and discussion about the Tiananmen Square massacre, including at Confucius Institutes worldwide.”

Rep. Chris Smith (R-NJ) is a long-time human rights leader in the U.S. Congress. In his speech at the Rally, Smith not only recognized the courage of Chinese protesters and victims in 1989, but he also highlighted the ongoing large scale human rights abuses still happening in China: “I pray someday soon, [events] will lead to free and democratic China…we see a marked deterioration in the human rights situation; on the religious front, whether it be the Falun Gong, the Tibetan Buddhists, the Uyghurs in Xinjiang, or the Christians… all are under a new and more aggressive siege…And world leaders including in this Capitol need to speak out boldly and unambiguously, against this attack against people of faith.”

House Speaker Nancy Pelosi attended the rally as a keynote speaker. She recalled her courageous effort in 1991, two years after the Tiananmen massacre, when she and other Republican congressmen went to Beijing and unfurl a banner to pay tribute to the victims of the Tiananmen Massacre at Tiananmen Square. She joked that the police at the Tiananmen Square were chasing them to see who could run faster.

In her speech, she emphasized: “Today we remember the horror of the Tiananmen Square massacre and the heroism of the Tiananmen protesters. What Chinese communists did that day was a challenge to the conscience of the world.” Pelosi, together with Jianli Yang from Citizen Powers Initiatives of China, and sculptor Thomas Marsh, also unveiled a statue of the Tank Man.

Tank Man is the nickname of an unidentified Chinese man who courageously stood in front of a column of tanks, holding grocery bags in his hand. This happened on the morning of June 5, 1989, after the Chinese military had suppressed the Tiananmen Square protests by force and prepared to leave Tiananmen Square. The Tank Man repeatedly shifted his position in order to obstruct the lead tank’s attempted path around him.

The incident was filmed and smuggled out to a worldwide audience. Internationally, it is considered one of the most iconic images of all time. Yang Jianli and Fang Zheng also launched a petition online to urge the Chinese government to reveal the identity and whereabouts of this Tank Man.

Yang also cited a Washington DC Declaration that stated: “We dedicated our youth, innocence, blood, and tears to the 1989 democracy movement… Today with deep conviction, we pledge to the heaven and earth that, as long as the tyranny and the totalitarian rule by Chinese communist party is not over, we will persist in our endeavor and sacrifice without regret, we are willing to work tirelessly to end the tribulation of our people, until the day when the sun of freedom rises over China.”

Lee Edwards, the Chairman of the Board of Trustees of VOC, pointed out that the rally was live streaming into Hong Kong and then transmitted into mainland China.  He also revealed that there have been discussions about “forming an international commission to have a Nuremberg-type of trial, in which we will bring communists before this tribunal and talk about their crimes and victims… Perhaps we will do it next year. So, we could put communists on trial internationally.”

Chen Guangcheng, the famous blind human rights lawyer who escaped from China, also was not satisfied with just commemoration and words of encouragement.  He mentioned that he has already compiled names and evidences for some Chinese human rights abusers and provided the materials to the U.S. Department of State, so that these perpetrators could have their U.S. entry visas or green cards revoked and the U.S government could freeze their assets in the U.S., according to the Global Magnitsky Human Rights Accountability Act.