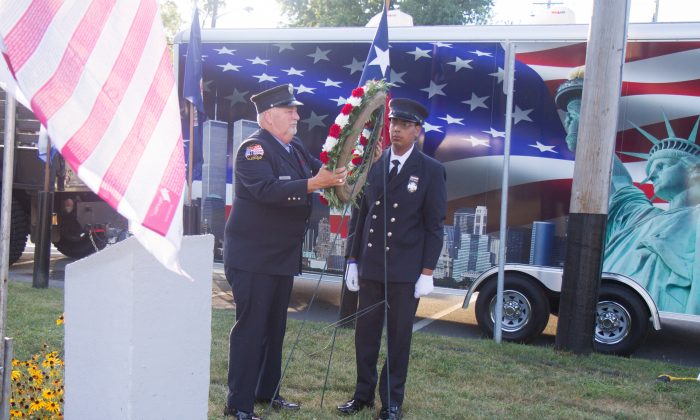 Former New York City Fire Department member and former Howells Fire Chief, Charles Gersbeck, lays a wreath with his son James Gersbeck, a fireman with the Howells Fire Department, by the 9/11 memorial in Veteran’s Memorial Park in Wallkill on Sept. 11, 2016. The wreath-laying was part of the Town of Wallkill’s remembrance ceremony for the 15th anniversary of the attacks on the World Trade Center and Pentagon. (Holly Kellum/Epoch Times)
New York

TOWN OF WALLKILL—Town of Wallkill officials read 44 names, punctuated with 44 rings of a bell, in a remembrance ceremony on Sept. 11 for the Orange County residents who perished in the 9/11 attacks that struck down the Twin Towers in New York City and hit the Pentagon in Arlington, Virginia on Sept. 11, 2001.

“Most of the headlines on our local papers and those national papers that we turn to as Americans this morning read that we have forgotten 9/11,” said Wallkill Town Supervisor Dan Depew. “Here in the Town of Wallkill, that was not true.”

Veterans groups, military, police and fire department members were all in attendance, as was an audience of several dozen at Veterans Memorial Park that day, the 15th anniversary of the fateful attacks. Former New York City Fire Department member and former Howells Fire Chief Charles Gersbeck laid a wreath by the park’s 9/11 memorial with his son, James Gersbeck, a fireman with the Howells Fire Department.

Pastor of Wallkill’s Transformation Church, Joe Nieves, urged people in light of the 9/11 attacks and more recent attacks like those on police officers in Atlanta, Georgia to remember the past, but with hope for a better future.

“Memory is important, but we also must remember that memory with hope is just as important as having hope with memory,” he said.

The ceremony was especially poignant for Third Ward Councilman Neil Meyer who was working at Goldman Sachs a few blocks from the World Trade Center the day the attacks happened. He said his office was one of the first to see the office paper falling from the crumbling buildings, but declined to go into more detail saying it was too painful to relive.

He knew people who worked in the Twin Towers, but miraculously none of them were there that day, he said, all for different reasons.

Still, the horror of the event is not something that 15 years has assuaged, and the ceremony was a painful reminder of what he witnessed, he said.

“I would really prefer not to relive that event again,” he said. “It was tough enough the first time.”