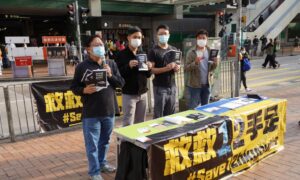 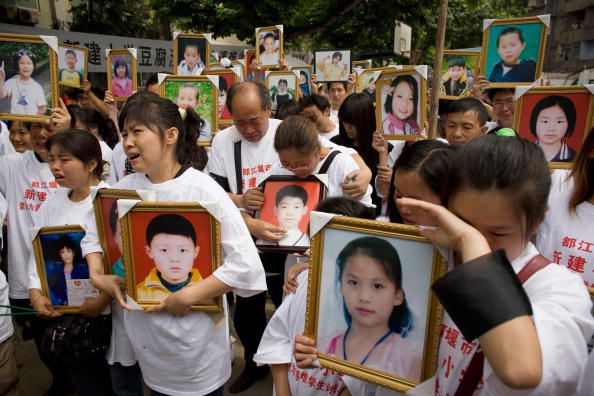 Parents of pupils killed when the Xinjian primary school collapsed in the May 12 earthquake cry as they hold portraits of their loved ones during a commemoration of Children's Day on the rubble-strewn school campus on June 1, 2008 in Dujiangyan, Sichuan province, China. Hundreds of parents and relatives of killed pupils wore T-shirts with the slogan 'Severely Punish Corrupt and Shoddy Construction' during the tearful gathering. (Andrew Wong/Getty Images)
China Human Rights

May 12 marked the 10-year anniversary of a 7.9-magnitude earthquake that struck Wenchuan County, Sichuan Province in southwestern China, killing 69,227 and injuring 374,643, according to the Chinese regime’s Ministry of Civil Affairs. More than 17,000 remain missing.

An estimated 7,000 school buildings in the earthquake zone collapsed. At Beichuan Middle School alone, more than 1,000 students were crushed and killed in the rubble. Photos of the collapsed buildings that circulated online clearly showed that the concrete walls were merely supported by bits of iron mesh embedded inside, instead of the standard steel bars.

The shoddily built schools were thereafter referred to as “tofu dreg construction,” collapsing like tofu upon encountering earthquake tremors. Sichuan residents suspected that local authorities siphoned off construction expenses and cut corners when building the schools.

Miyamoto International, a California-based company that specialized in earthquake-secure construction, sent a team to investigate the collapsed school buildings after the earthquake, and found many flaws in the Sichuan schools, including construction techniques, building design, and quality supervision, reported India Today back in May 2008.

For the past decade, parents of the earthquake victims have protested the authorities to demand justice for their children’s deaths.

On May 12, about 200 parents commemorated the deaths of their children outside the former site of their school, Juyuan Middle School. The parents held banners asking local authorities to punish those officials responsible for the shoddily built schools. Many plainclothes police monitored the scene, according to a report by Cable TV Hong Kong.

When a Cable TV reporter, Lei Zijian, finished his interview with the parents and went back to his car, two men and one woman opened Lei’s car door and tried to drag him out, then took his bag, which contained his computer and audio recording equipment.

Another reporter, Chen Haohui, saw that Lei was being surrounded in his car, and started to record the scene with his cell phone, but was dragged aside by two men. They kneed Chen in the abdomen and kicked his head, reported Cable TV.

The two men left after staff from the local propaganda office arrived at the scene. The staff brought Chen to the hospital to examine his injuries. According to the hospital examination, Chen had numbness and pain in his wrists, as well as coughing, as a result of being beaten, reported Cable TV.

Many parents have also tried to appeal to central authorities in Beijing, but have been met with police interference and arrests.

Sang Jun, parent of an elementary school student who perished in the 2008 earthquake, told Radio Free Asia on April 26 that he and other victims’ parents were stopped when they recently traveled to Beijing.

“In recent few days, I have been surrounded by national security and agents who are monitoring me,” said Sang. “Several parents who are the lead representatives for student victims are also being monitored.”

Ms. Chou (a pseudonym) from Mianyang City, Sichuan Province told The Epoch Times on April 28 that she has been jailed in 2009, 2010, and 2013 for her efforts to seek justice for earthquake victims. “Now there are people following us wherever we go, even when we go to the market to buy groceries.”

Meanwhile, donations collected to aid earthquake victims have been embezzled by local officials.

According to data from Sichuan authorities, in the six months after the earthquake, China received 76.2 billion yuan ($12 billion) worth in goods and funds, including 65.2 billion ($10.3 billion) in money donations.

Eighty percent of donations for the earthquake went to Chinese government accounts, according to an assessment done by professor Deng Guosheng and his team at Tsinghua University’s public management institute in 2008.

Out of the 65.2 billion yuan ($10.3 billion) of donations, the Chinese regime only publicized allocation details for about 15.1 billion yuan ($2.37 billion)—approximately 23 percent of the funds. As for the remaining 50.1 billion yuan ($7.87 billion), there are no public records for how it was spent, reported Caijing.com, a Chinese business publication, in May 2016.

Despite the corruption, the Chinese regime decided to formally establish the anniversary of the earthquake as “Sichuan Thanksgiving Day,” reported state-run media Xinhua on May 6.

The Chinese regime said citizens should remember the day by being grateful toward the Party for rescuing the earthquake survivors.

The Xinhua report quoted Yang Yunbing, the Party secretary of Zhongtanbao village, which was located in the earthquake zone: “We are far too insignificant, comparing to the grand love of the government.”