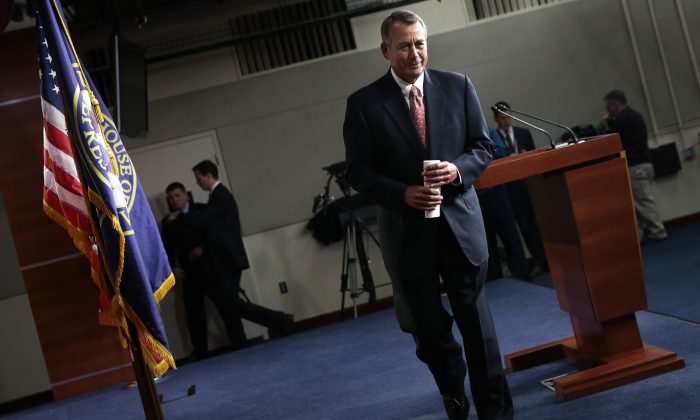 Speaker of the House John Boehner (R-Ohio) leaves after a press conference at the Capitol in Washington, D.C., on Dec. 11, 2014. Boehner has worked aggressively pass the omnibus bill. (Win McNamee/Getty Images)
US

The House voted to pass a polarizing $1.1 trillion spending bill that would fund most of the government for the rest of the year, surmounting opposition from many members of both parties in a 219-206 vote.

The Senate is expected to pass the bill, and an alternate bill providing a 48-hour extension in existing funding was ready for passage if necessary as the two-year Congress neared an end.

The president issued a statement Thursday that he would sign the bill, but said he was concerned about the provisions in bill that would loosen banking and campaign finance regulation. According to reports, the White House is calling Democrats urging them to vote for the bill.

Earlier, House Minority leader Nancy Pelosi (D-Calif.) came out against the bill, calling the banking and campaign finance provisions a “taint” that left her “heartbroken.”

On the Senate floor, Elizabeth Warren (D-Mass.) called on House Democrats to vote against the bill until the provision related to banking was removed.

“Nobody sent us here to stand up for Citigroup,” she said, referring to the allegation that certain provisions concerning the regulation of derivatives in the bill were written by Citigroup lobbyists.

She also asked House Republicans to do the same thing. “I ask my Republican colleagues who don’t want to see another Wall Street bailout to strip this provision from the bill.” Pelosi stated to her fellow Democrats, “However you decide to vote in the end, I thank those who continue to give us leverage to improve the bill.”

Warren has not said whether she would vote against the bill if it came to the Senate.

The spending bill passed a procedural checkpoint by a razor-thin 214–212 vote after a outgoing Rep. Kerry Bentivolio (R-Mich.) switched his vote at the last minute Thursday morning.

The vote to not put the bill to a vote consisted of 196 Democrats and 16 Republicans. Those 16 Republicans are opposed to the bill because it would fund the president’s immigration order to shield 5 million illegal immigrants from deportation.

On Wednesday, a group of Republicans tried and failed to amend the bill to include a provision that would defund the immigration order, which they argue is unconstitutional.

“We had 75 members on board with our important amendment, and the will of the people was not heard,” said Rep. Dave Brat (R-Va.), who was elected to Congress largely on an anti-illegal immigration campaign in 2014 and was among the 16 Republicans. Brat is aligned with tea party conservatives.

More Republicans came out against the bill Thursday and that has pushed the Republican leadership to get votes from Democrats to pass the bill. Rep. Marsha Blackburn (R-Tenn.) said a statement she would vote against the bill because the “package fails to take the necessary actions to defund the president’s lawless amnesty.” Late Thursday afternoon, she said in a tweet, “Taking calls from constituents. Glad to hear support from them for my ‘no’ vote.”

The House went into recess in the afternoon, unusual for a bill needed to pass before Thursday to avoid a government shutdown.

“It is clear from this recess on the floor that the Republicans don’t have enough votes to pass the [spending bill],” Pelosi said in a statement. “This increases our leverage to get two offensive provisions of the bill removed: the bank bailout and big money for campaigns provision.”

The 1,603-page spending bill was unveiled Tuesday and Speaker John Boehner has been criticized for not giving members of the House more time to read the bill, which Boehner blames on Senate Democrats.

A bill providing a 48-hour extension in existing funding was ready for passage if necessary as the two-year Congress neared an end.

When Congress convenes in January, Republicans will have control of the Senate for the first time in eight years and will hold their strongest majority in the House in more than eight decades.