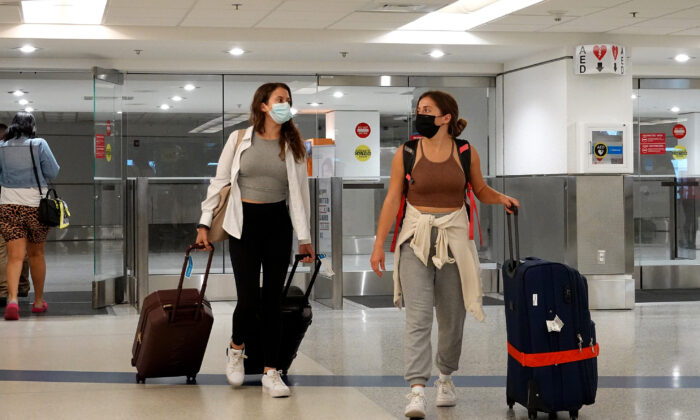 The hope that 2022 would be a year of recovery for the United States and the global economy seems to be sinking as the new Omicron variant of the coronavirus may restrain economic activity worldwide.

As soon as news about Omicron was announced, markets were hit hard from all directions. Major stock market indexes tumbled, with crude oil prices and Treasury yields reporting big declines.

Meanwhile, vaccine makers made big wins, with Moderna (Nasdaq:MRNA), BioNTech (Nasdaq:BNTX), and Pfizer (NYSE:PFE) seeing share price increases. This may be short-lived, though, because the vaccine makers are expected to evaluate if Omicron is resistant to their current vaccines.

Until this is determined, the market growth of COVID-19 vaccines is also in limbo and may take a hit if the vaccines’ effectiveness against Omicron turns out to be lower than expected. Pfizer has said that if needed, the company can produce and ship a new vaccine tailored to the new variant within 100 days, while Moderna has said it is working toward making a new vaccine available by early 2022.

Already, the airline and tourism industries have begun to suffer again. The sectors had just started to pick up before Omicron was announced. But now, with all the travel suspensions, new quarantine requirements, and mandatory vaccination, it is unlikely that more stability and growth will come to the sectors anytime soon. Airline stocks plunged last week, with United Airlines dropping by 9.6 percent and American Airlines falling by 8.8 percent.

The new variant was first identified by scientists in South Africa. The World Health Organization (WHO) has called it a variant of concern and named it Omicron. It’s believed to have a large number of mutations, particularly to the spike protein, and could potentially have greater transmissibility. As per the WHO, preliminary evidence indicates an increased risk of reinfection with the new variant. In addition to several countries in Africa (South Africa, Malawi, Mozambique, Zambia, Angola, Botswana, Eswatini, Lesotho, Namibia and Zimbabwe), the variant has also been reported in the Netherlands, Germany, the UK, the Czech Republic, Italy, France, Canada, Hong Kong, and Australia.

Governments around the world have announced travel restrictions and other measures to protect their citizens. Israel has banned all foreigners from entering the country; Australia has banned the entry of travelers from nine southern African countries; South Korea and the United States have imposed restrictions on travel from eight southern African countries, and France and Canada took similar actions. In addition, Switzerland has widened its quarantine requirements to travelers arriving from Britain, the Czech Republic, the Netherlands, Egypt, and Malawi.

The world had been optimistic that the global economy would kick off 2022 on a much stronger footing than 2021. However, with the new travel restrictions, declaration of a state of emergency in some regions, and expected increases in new infections, corporate confidence and consumer sentiment is likely to be affected. Even though the holiday season is all set to begin, it is doubtful that retailers in the United States will enjoy the level of sales they were expecting before news of the new variant hit the market. If Omicron mutations turn out to be more dangerous than Delta and if governments respond again with lockdowns, fears of more inflation and slower economic growth will reignite.

The new variant “could slow the healthy momentum in the economy,” Mickey Levy, chief economist for the U.S. and Asia at Berenberg Capital Markets told Bloomberg on Monday.

While the severity and transmissibility of Omicron are still being determined, economic uncertainty has already increased, and the positive 2022 forecasts will continue to be reevaluated as more data and more information about the new variant surface in the next few days.

“We stand by our expectation that global economic growth and inflation will slow but remain above average in 2022,” Paul Christopher, head of global market strategy at Wells Fargo Investment Institute, wrote in a recent note.

“The emergence of a new COVID-19 variant is another source of uncertainty,” he said. “If the Omicron variant proves more deadly, more transmissible, and completely evades the currently available vaccines, then slower economic growth may develop.”

Many experts say that the risk of the coronavirus evolving is much higher where there is an absence of adequate levels of vaccination.

How and what impact Omicron has on global markets and businesses in the United States remains to be seen. But some have already gone into panic mode. Even the WHO has criticized the travel bans being imposed on African countries without any scientific evidence or backing that the new variant is more transmissible or dangerous.

The WHO is working with experts to understand Omicron, but detailed findings are likely to be reported within a few weeks. Till then, the U.S. economic recovery and growth is expected to slow down and may even plunge further if Omicron turns out to be more dangerous than Delta.

Samna Ghani
Freelance Reporter
Follow
Samna Ghani covers health care business, management, and leadership. She has been a health care writer and editor for more than a decade.