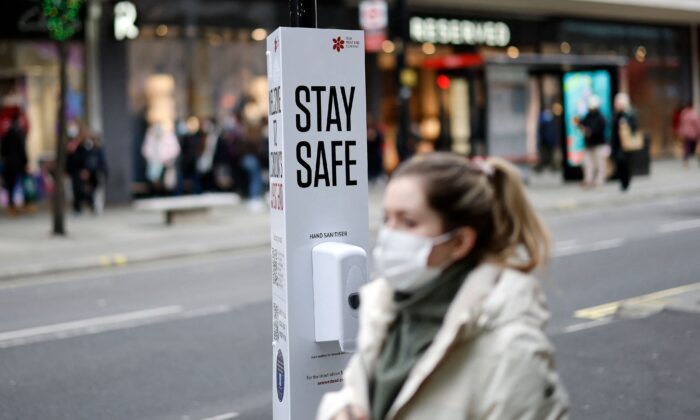 A woman walks past a COVID-19 health message sign London on Dec. 21, 2021, as the United Kingdom deals with a surge of infections driven by the Omicron variant. (Tolga Akmen/AFP via Getty Images)
Canada

Omicron and Policy Directions: What We Know So Far

The latest variant of concern, Omicron, is spreading rapidly, but data so far shows its severity to be mild compared to past variants, while some argue it’s still too early to draw conclusions.

“There is reason to be optimistic for most individuals, but we should at the same time watch how it goes here to confirm our optimism,” Dr. Harvey Risch, a professor of epidemiology at Yale School of Public Health, told The Epoch Times.

While governments in Canada and other jurisdictions have for the most part introduced new restrictive measures to combat the rising case counts, opinions vary among experts on what is the right course of action. Some are calling for more restrictions and lockdowns, some say severe restrictions could have worse consequences and want a more measured response commensurate with the severity, and some are even weighing in on the implications of the new variant on natural immunity.

A study from the University of Hong Kong found that the reason for the higher transmissibility of the Omicron variant could be that it multiplies 70 times faster than the Delta variant and the original SARS-CoV-2 virus in the bronchus. It also shows that Omicron replicates more in the respiratory tract than in the lungs, and that infection by Omicron in the lungs is 10 times less efficient than the original SARS-CoV-2. Released Dec. 15, the study is currently being peer-reviewed before publication in a scientific journal.

The surge of COVID-19 cases caused by Omicron, first discovered in South Africa and reported to the World Health Organization on Nov. 24, seems to be “over the curve” and on the decline in South Africa’s Gauteng province, the epicentre of the variant, said Dr. Angelique Coetzee, one of the first doctors in the country to treat patients with the variant, in a Dec. 20 CNN interview.

“In total, if you look at our numbers, it’s going down,” she said.

Of note is that the rates of deaths and hospitalizations remain much lower compared to the previous waves of the virus infection.

“When we look at Delta, it was four or five hundred people per day admitted [to the hospital]. If we look at Omicron, [it was] 87 [on Dec. 18], and our numbers are more or less the whole time around this,” Coetzee said.

A preprint study posted this week by South African researchers shows that those diagnosed with Omicron in the country were 80 percent less likely to be admitted to hospital compared to those infected with another variant. The study also found that those who were hospitalized with Omicron were 70 percent less likely to develop severe disease compared to those hospitalized with the Delta variant. The study has not yet been peer-reviewed.

Experts are also monitoring the situation closely in Denmark and the UK, which have had their own Omicron outbreaks, since the conditions are closer to countries like Canada and can serve as similar examples.

So far, the data show a similar trend in these countries as in South Africa, with high case counts but low numbers of deaths and hospitalizations. However, experts caution that it may be too early to draw conclusions, as hospitalization and deaths trail case identification, and infections in Denmark and the UK happened more recently than in South Africa.

If current data is to be taken as an indication, both Denmark and the UK show a clear decoupling of cases and deaths.

In the face of the rising case counts due to the Omicron variant, a number of countries including Canada have introduced a range of new restrictions.

Canada has issued an advisory warning against all non-essential international travel, while the provinces have limited gathering sizes or outright closed certain types of indoor businesses such as gyms.

Some are saying stricter measures are needed to curb the rising cases.

“We need to stop moaning, face the reality and do the right thing,” Dr. Peter Jüni, scientific director of the advisory table, told CBC. “What do you do if you’re on a beach and the tsunami is coming? … You say, oh there’s no tsunami? No, you can’t.”

If the hospitalizations and death counts remain relatively low, as seen in countries on the forefront of the infection so far, the tsunami metaphor may only be accurate for case counts, rather than overall severe outcomes.

Dr. David Jacobs, chair of Ontario Specialists Association and a radiologist who has been involved with COVID-19 cases, criticized Jüni’s tone.

“People are exhausted and demoralized. We should not be telling people to ‘suck it up.’ They’ve been doing that for a couple of years already,” he said on Twitter.

Some medical professionals have argued that while early data from other countries is optimistic, a sound approach would be to plan for the worst and hope for the best.

“There’s some potentially very positive news coming out of South Africa on limited virulence associated with omicron,” Dr. David Fisman, a professor of epidemiology at the University of Toronto, said on Twitter on Dec. 12.

“If that proves true it’ll be absolutely excellent news. I think it’s always a good idea to hope for the best and plan for the worst,” he said, while pointing out that there are a number of factors that make the situation in South Africa different from that in Canada, including the former having a younger population and lower vaccination rate but higher immunity from previous infection, among other factors.

If planning for the worst involves more shutdowns, however, it would have repercussions, given the increased rates of depression and mental illness during the pandemic as well as major adverse economic implications that result from lockdowns and restrictions, to name a few issues.

“Many of the businesses restricted today have lost over a year’s worth of business to government closures. To be limited again during one of the most important times of the year is a bitter pill to swallow,” the Canadian Federation of Independent Business said in a statement on Dec. 17 after Ontario announced new restrictions.

Dr. Jacobs, who believes a key measure to combat surging cases is vaccine booster shots, says that while “we’re not out of the woods” yet, the most dire predictions for Omicron’s impact seem to have not come to pass, going by the experience of countries like Denmark that are akin to Canada.

In the case of South Africa, where more time has elapsed since the initial outbreak and where the case count seems to be on the decline, he similarly cautions that the experience there may not be similar to that in Canada, as “they have natural immunity and we have immunity from vaccination.”

“There is no guarantee that we will have the same experience,” he said in a tweet.

South Africa’s rate of full vaccination among adults is about 30 percent, while 87 percent of those 12 years and older have been fully vaccinated in Canada.

South Africa, a country of 60 million people, had a heavy bout of infection from the Delta variant this year. Since the spring, it has seen daily deaths peaking at 420 in late July, and a case fatality rate of around 3.4 percent in early May, declining to around 2.7 percent as of Dec. 20. Over that same period, Canada’s daily deaths peaked at 50 at the end of April and again in mid-October, with a case fatality rate of less than 2 percent since late April. Close to 93 percent of COVID-19 deaths in Canada are among those aged 60 or older.

Paul Elias Alexander, a former assistant professor at McMaster University and an expert in evidence-based medicine and clinical epidemiology, says the fact that the Omicron variant is spreading fast and seems to have a less severe impact may help bring about natural immunity.

“It will work wonders,” he said in an email. “Natural immunity to one variant will protect against others due to the fact the immune system sees the full viral ball and all the proteins (membrane, nucleocapsid, spike, all conserved parts of the virus etc.) while vaccine is geared to just one spike.”

A new study published this week in the Journal of the American Medical Association on cases of reinfection after vaccination found that these so-called “breakthrough infections” greatly enhance the immune response to variants of SARS-CoV-2.

“You can’t get a better immune response than this,” study author Fikadu Tafesse, assistant professor of molecular microbiology and immunology at the Oregon Health & Science University, said in a news release.

Australia’s chief medical officer, Dr. Paul Kelly, said on Nov. 27 that if a mild version of COVID-19 spreads rapidly and helps bring immunity, “that would be my number one Christmas present … if that was how it ended up.”

He added that it was too early to make that determination.

“I believe that Denmark has recorded some hospitalizations, but very few seem to have been serious,” he said, adding that the situation needs to be monitored further before making any final conclusions.

But what is key to proper monitoring of the pandemic, he notes, is to observe counts of deaths and hospitalizations rather than cases.

“Cases may sometimes be unpleasant, but if they generally resolve on their own or with early treatment as we know is available, and don’t leave serious lasting effects, then their numbers are unimportant,” Dr. Risch says.

“Follow the hospitalizations and mortality, and relax about the cases.”