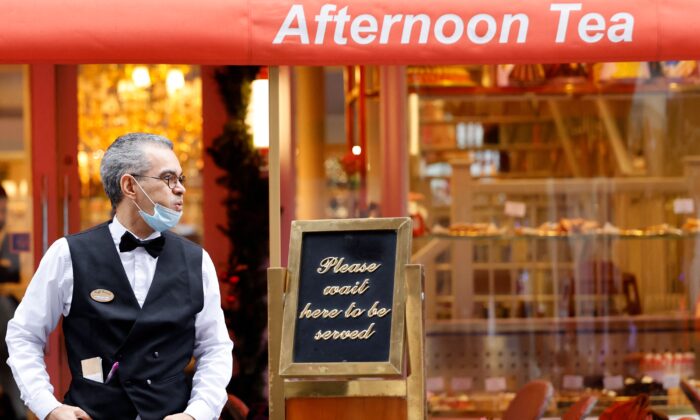 A hospitality industry worker waits for customers outside a restaurant in London on Dec. 21, 2021. (Tolga Akmen/AFP via Getty Images)
WORLD

The Omicron variant of the CCP (Chinese Communist Party) virus is up to 70 percent less likely to result in hospitalization, the UK Health Security Agency (UKHSA) said on Thursday.

According to the government agency’s preliminary findings on the new variant, the risk of hospital admission for an identified case with Omicron is reduced compared with a case of the Delta variant.

However, Omicron is believed to be infecting more people who have previously had COVID-19, with 9.5 percent of people being reinfected with Omicron.

Omicron also appears to evade vaccines better than previous variants. Though a booster jab is said to provide more protection against the variant, data suggests protection starts to wane 10 weeks after booster vaccination.

The UKHSA findings are consistent with two studies published on Wednesday, both of which suggest the severity of the Omicron variant is relatively mild.

Earlier on Thursday, Tim Spector, professor of genetic epidemiology at King’s College London and the lead scientist on the ZOE COVID Study app, also said that preliminary data based on around 2,500 probable cases reported on the ZOE app suggests that Omicron is milder than Delta.

But he warned that Omicron cases “continue to rise at an extraordinary rate” and “hospital admissions are increasing.”

Javid said the findings are still “early-stage analysis” and it is still “too early to determine next steps.”

He said the government will “continue to monitor the data hour by hour,” and urged the public to “stay cautious this Christmas.”