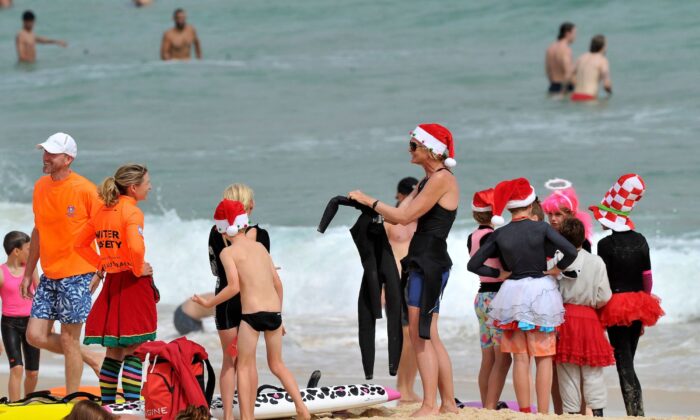 Residents enjoy their afternoon on the Bondi Beach in Sydney on December 22, 2021, amid number of COVID-19 cases that keeps on the rise across the New South Wales state ahead of the Christmas festivities. (Photo by Mohammad FAROOQ / AFP) (Photo by MOHAMMAD FAROOQ/AFP via Getty Images)
Australia

Omicron Surge Leads to the Tentative Return of Restrictions in Australia

Spiralling numbers of COVID-19 cases linked to the Omicron variant has led to state governments in Australia reintroducing pandemic restrictions.

As Victorians wake to new density limits in hospitality venues, NSW is reportedly set to shut nightclubs and some major events in response to the variant.

The Northern Territory has also implemented a territory-wide lockout for the unvaccinated.

It comes as Australia recorded more than 72,000 cases on Thursday, the highest daily number since the pandemic began.

Chair of the Coalition for Epidemic Preparedness, Professor Jane Halton, said the new restrictions were sensible given the rise in infections.

“What we are trying to do now is manage this particular variant of the virus, and that means slowing its spread down,” Halton told the Nine Network on Friday.

“This is very infectious, we know that, so people are going to have to be prudent for the next several weeks.”

The payment is worth $750 for each seven day period a person has been told to self-isolate or quarantine.

The rise in cases has led to a boost in demand for rapid antigen tests, which has caused widespread shortages and reports of price gouging at some retailers.

Large queues have been seen at PCR testing clinics across the country following the rapid test shortage.

“There is a very serious risk the Australian community is going to be dumped by this fourth wave because Scott Morrison failed to do the hard work,” he said.

“The critical weapons in the fight against Omicron … are to make sure we’re getting boosters into people’s arms and to ensure we have a comprehensive rapid testing regime and (the prime minister) failed at both of them.”

Morrison has said 200 million rapid tests would be available in coming weeks but ruled out making them universally free, instead the government will be providing 10 tests over a three-month period to concession cardholders, which covers more than six million people.

Nearly three million people aged 16 and over have received their booster dose since the booster rollout began.

The time frame between doses was shortened earlier this week from five to four months between the second and third dose.

That will shorten again to three months by the end of January.