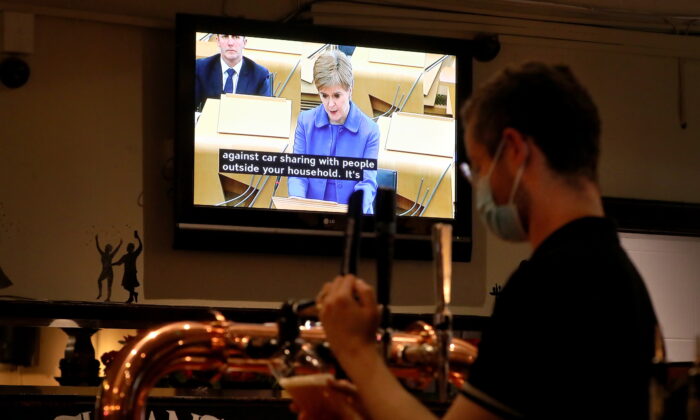 The final restrictions put in place in response to the Omicron variant sweeping across Scotland will be eased from Monday.

First Minister Nicola Sturgeon announced last week nightclubs would be able to reopen, while the caps on indoor events, table service requirements for venues selling alcohol, and social distancing will also be removed.

The measures were put in place in December—along with a maximum capacity in outdoor events of 500, which was eased last Monday as the new variant caused a spike in cases—eventually peaking at more than 20,000 in the first days of 2022.

However, infections started to dip faster than expected, never reaching the worst-case scenario the Scottish government envisaged as possible—with projections suggesting 50,000 people could be infected daily with the new variant at the peak of the wave.

But the requirements for face coverings and self-isolation will remain for the foreseeable future.

Announcing the end of the restrictions on Jan. 18, Sturgeon said: “Although significant pressures and uncertainties do remain, the data nevertheless gives us confidence that we have turned the corner on the Omicron wave.”

She told MSPs: “A combination of booster vaccinations, the willingness of the public to adapt their behaviour to help stem transmission, and the temporary protective measures introduced in December, has helped blunt the impact of the Omicron wave.”

The First Minister also said there would be no expansion to the vaccine passport scheme despite consideration by her cabinet.

Tory leader Douglas Ross said on Thursday the First Minister had been “too gung-ho” in bringing in new restrictions when the new strain was detected.

But speaking on the BBC’s Sunday Morning show, Sturgeon defended the use of restrictions, saying they were “worth it”.

“The short answer, I think, is yes they were, although they have a big impact on businesses, and individuals.”

She added: “If you look at what we were predicting through our modelling would be the case in January before Christmas … it was around 50,000 infections a day and we didn’t see that materialise or anything like that materialise.

“I think that was a combination of the acceleration of the booster campaign … these sensible, balanced, protective measures we introduced before Christmas, and lastly—perhaps most importantly—the magnificent, responsible response of the public who changed their behaviour in the face of Omicron in order to try to stem transmission.

“So, yes, I think what we did has been worth it and we’re hopefully now seeing Scotland … very firmly on the downward slope of that Omicron wave,” Sturgeon said.