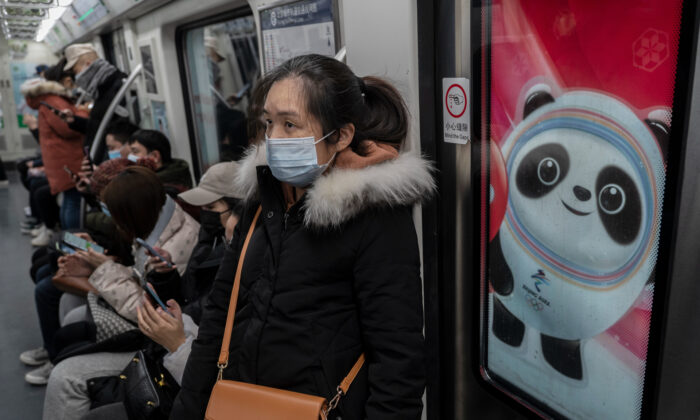 A woman people ride on a metro car next to a logo for Beijing 2022 Winter Olympics mascot Bing Dwen Dwen during rush hour in Beijing on Jan. 13, 2022. (Kevin Frayer/Getty Images)
Beijing 2022 Olympics

The fast-spreading Omicron variant has hit Beijing amid emerging COVID-19 clusters across the country, raising pressure on the regime to keep the virus at bay just weeks before the city is due to host the 2022 Winter Olympic Games.

Beijing on Jan. 15 reported its first locally transmitted Omicron case from Haidian—the second-largest district located in the city’s northwest. Officials responded by sealing off 17 “risk areas” associated with the COVID-19 case. All residents of the neighborhood compound where the person lives have temporarily been barred from leaving their homes.

Omicron’s detection in Beijing comes as cities across China have ratcheted up vigilance against the virus ahead of the Winter Games, which are scheduled to start on Feb. 4. The variant is posing a fresh challenge for the regime, whose officials have doubled down on its zero-tolerance approach, which was originally a nationwide effort to bring the Delta variant under control.

Over 20 million Chinese residents in at least five cities are under lockdown. In Xi’an, harsh virus containment policies have caused locals to struggle for access to food and other necessities, and the dying have been unable to obtain medical help. Similar lockdown measures in port cities such as Ningbo also threaten to disrupt the global supply chain.

Despite the stringent control efforts, more than 14 provinces across China have reported Omicron cases as of Jan. 15, according to He Qinghua, a senior official with China’s National Health Commission’s Disease Prevention and Control Bureau. The official didn’t disclose the exact infection numbers, but Mi Feng, a spokesperson for the commission, described the situation as “grim.”

China is “facing the two-fold challenge” from Delta and Omicron, He said at a Jan. 15 press conference, noting that with the upcoming Chinese Lunar New Year holiday—which coincides with the Beijing Olympics—the risks of COVID-19 transmission are even higher.

The megacity of Tianjin, a two-hour drive from Beijing, also has been sealing off residential communities, triggering panic buying among local residents who wish to avoid the same pains as those inflicted on residents of Xi’an, where the Dec. 26, 2021, lockdown remains in force.

Omicron cases linked to Tianjin are officially reported to have risen to 400 as of Jan. 15, spilling into cities as far as Anyang city in central China, and the northeastern city of Dalian.

In December, Beijing implemented travel curbs restricting people from entering the city if the area they’re traveling from has had one or more local infections in the past two weeks.

Zhuhai, a city in the southeastern Chinese province of Guangdong bordering Macau, has canceled all flights to Beijing and public bus routes after announcing seven cases of Omicron.

Chinese officials also confirmed local Omicron infections in Shanghai on Jan. 15. The night before, videos shared on social media showed college students fleeing their campuses to avoid being locked inside.

“So scary,” one man says, after he and others slip out from the cordoned school entrance. “I almost didn’t make it.”

To avoid arousing suspicion from security, he says he decided to leave with only his laptop in a backpack, and he shipped his clothing before he left.